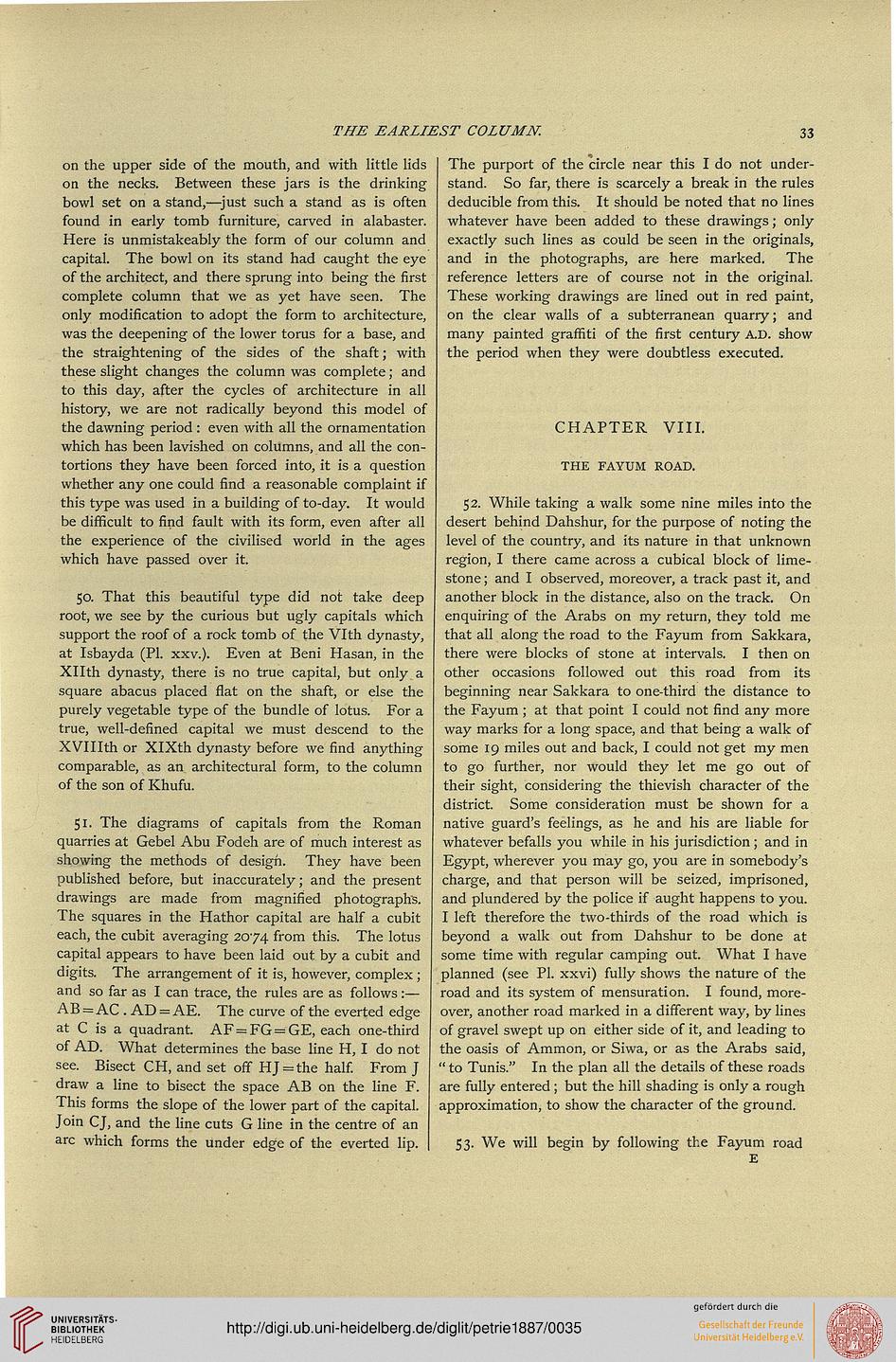 on the upper side of the mouth, and with little lids
on the necks. Between these jars is the drinking
bowl set on a stand,—just such a stand as is often
found in early tomb furniture, carved in alabaster.
Here is unmistakeably the form of our column and
capital. The bowl on its stand had caught the eye
of the architect, and there sprung into being the first
complete column that we as yet have seen. The
only modification to adopt the form to architecture,
was the deepening of the lower torus for a base, and
the straightening of the sides of the shaft; with
these slight changes the column was complete; and
to this day, after the cycles of architecture in all
history, we are not radically beyond this model of
the dawning period : even with all the ornamentation
which has been lavished on columns, and all the con-
tortions they have been forced into, it is a question
whether any one could find a reasonable complaint if
this type was used in a building of to-day. It would
be difficult to find fault with its form, even after all
the experience of the civilised world in the ages
which have passed over it.

50. That this beautiful type did not take deep
root, we see by the curious but ugly capitals which
support the roof of a rock tomb of the VIth dynasty,
at Isbayda (PI. xxv.). Even at Beni Hasan, in the
Xllth dynasty, there is no true capital, but only a
square abacus placed flat on the shaft, or else the
purely vegetable type of the bundle of lotus. For a
true, well-defined capital we must descend to the
XVIIIth or XlXth dynasty before we find anything
comparable, as an architectural form, to the column
of the son of Khufu.

51. The diagrams of capitals from the Roman
quarries at Gebel Abu Fodeh are of much interest as
showing the methods of design. They have been
published before, but inaccurately; and the present
drawings are made from magnified photograph's.
The squares in the Hathor capital are half a cubit
each, the cubit averaging 2074 from this. The lotus
capital appears to have been laid out by a cubit and
digits. The arrangement of it is, however, complex ;
and so far as I can trace, the rules are as follows:—
AB = AC . AD = AE. The curve of the everted edge
at C is a quadrant. AF = FG = GE, each one-third
of AD. What determines the base line H, I do not
see. Bisect CH, and set off HJ = the half. From J
draw a line to bisect the space AB on the line F.
This forms the slope of the lower part of the capital.
Join CJ, and the line cuts G line in the centre of an
arc which forms the under edge of the everted lip.

The purport of the circle near this I do not under-
stand. So far, there is scarcely a break in the rules
deducible from this. It should be noted that no lines
whatever have been added to these drawings; only
exactly such lines as could be seen in the originals,
and in the photographs, are here marked. The
reference letters are of course not in the original.
These working drawings are lined out in red paint,
on the clear walls of a subterranean quarry; and
many painted graffiti of the first century A.D. show
the period when they were doubtless executed.

52. While taking a walk some nine miles into the
desert behind Dahshur, for the purpose of noting the
level of the country, and its nature in that unknown
region, I there came across a cubical block of lime-
stone ; and I observed, moreover, a track past it, and
another block in the distance, also on the track. On
enquiring of the Arabs on my return, they told me
that all along the road to the Fayum from Sakkara,
there were blocks of stone at intervals. I then on
other occasions followed out this road from its
beginning near Sakkara to one-third the distance to
the Fayum; at that point I could not find any more
way marks for a long space, and that being a walk of
some 19 miles out and back, I could not get my men
to go further, nor would they let me go out of
their sight, considering the thievish character of the
district. Some consideration must be shown for a
native guard's feelings, as he and his are liable for
whatever befalls you while in his jurisdiction; and in
Egypt, wherever you may go, you are in somebody's
charge, and that person will be seized, imprisoned,
and plundered by the police if aught happens to you.
I left therefore the two-thirds of the road which is
beyond a walk out from Dahshur to be done at
some time with regular camping out. What I have
planned (see PI. xxvi) fully shows the nature of the
road and its system of mensuration. I found, more-
over, another road marked in a different way, by lines
of gravel swept up on either side of it, and leading to
the oasis of Ammon, or Siwa, or as the Arabs said,
" to Tunis." In the plan all the details of these roads
are fully entered ; but the hill shading is only a rough
approximation, to show the character of the ground.

53. We will begin by following the Fayum road