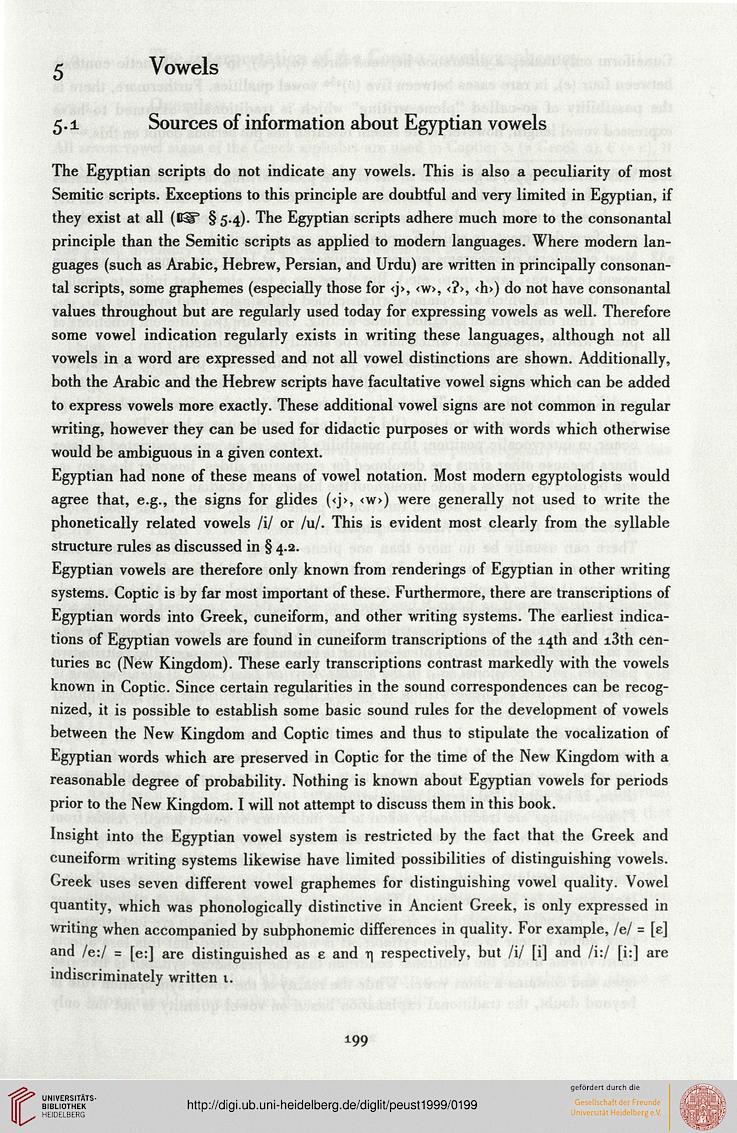 5.1 Sources of information about Egyptian vowels

The Egyptian scripts do not indicate any vowels. This is also a peculiarity of most
Semitic scripts. Exceptions to this principle are doubtful and very limited in Egyptian, if
they exist at all (US' § 5.4). The Egyptian scripts adhere much more to the consonantal
principle than the Semitic scripts as applied to modern languages. Where modern lan-
guages (such as Arabic, Hebrew, Persian, and Urdu) are written in principally consonan-
tal scripts, some graphemes (especiaEy those for <j>, <w>, <?>, <h>) do not have consonantal
values throughout but are regularly used today for expressing vowels as well. Therefore
some vowel indication regularly exists in writing these languages, although not all
vowels in a word are expressed and not all vowel distinctions are shown. Additionally,
both the Arabic and the Hebrew scripts have facultative vowel signs which can be added
to express vowels more exactly. These additional vowel signs are not common in regular
writing, however they can be used for didactic purposes or with words which otherwise
would be ambiguous in a given context.

Egyptian had none of these means of vowel notation. Most modern egyptologists would
agree that, e.g., the signs for glides (<j>, <w>) were generally not used to write the
phonetically related vowels /i/ or /u/. This is evident most clearly from the syllable
structure rules as discussed in § 4.2.

Egyptian vowels are therefore only known from renderings of Egyptian in other writing
systems. Coptic is by far most important of these. Furthermore, there are transcriptions of
Egyptian words into Greek, cuneiform, and other writing systems. The earliest indica-
tions of Egyptian vowels are found in cuneiform transcriptions of the 14th and i3th cen-
turies bc (New Kingdom). These early transcriptions contrast markedly with the vowels
known in Coptic. Since certain regularities in the sound correspondences can be recog-
nized, it is possible to establish some basic sound rules for the development of vowels
between the New Kingdom and Coptic times and thus to stipulate the vocalization of
Egyptian words which are preserved in Coptic for the time of the New Kingdom with a
reasonable degree of probability. Nothing is known about Egyptian vowels for periods
prior to the New Kingdom. I will not attempt to discuss them in this book.

Insight into the Egyptian vowel system is restricted by the fact that the Greek and
cuneiform writing systems likewise have limited possibilities of distinguishing vowels.
Greek uses seven different vowel graphemes for distinguishing vowel quality. Vowel
quantity, which was phonologically distinctive in Ancient Greek, is only expressed in
writing when accompanied by subphonemic differences in quality. For example, lei = [e]
and /e:/ = [e:] are distinguished as e and n respectively, but /i/ [i] and /i:/ [i:] are
indiscriminately written t.