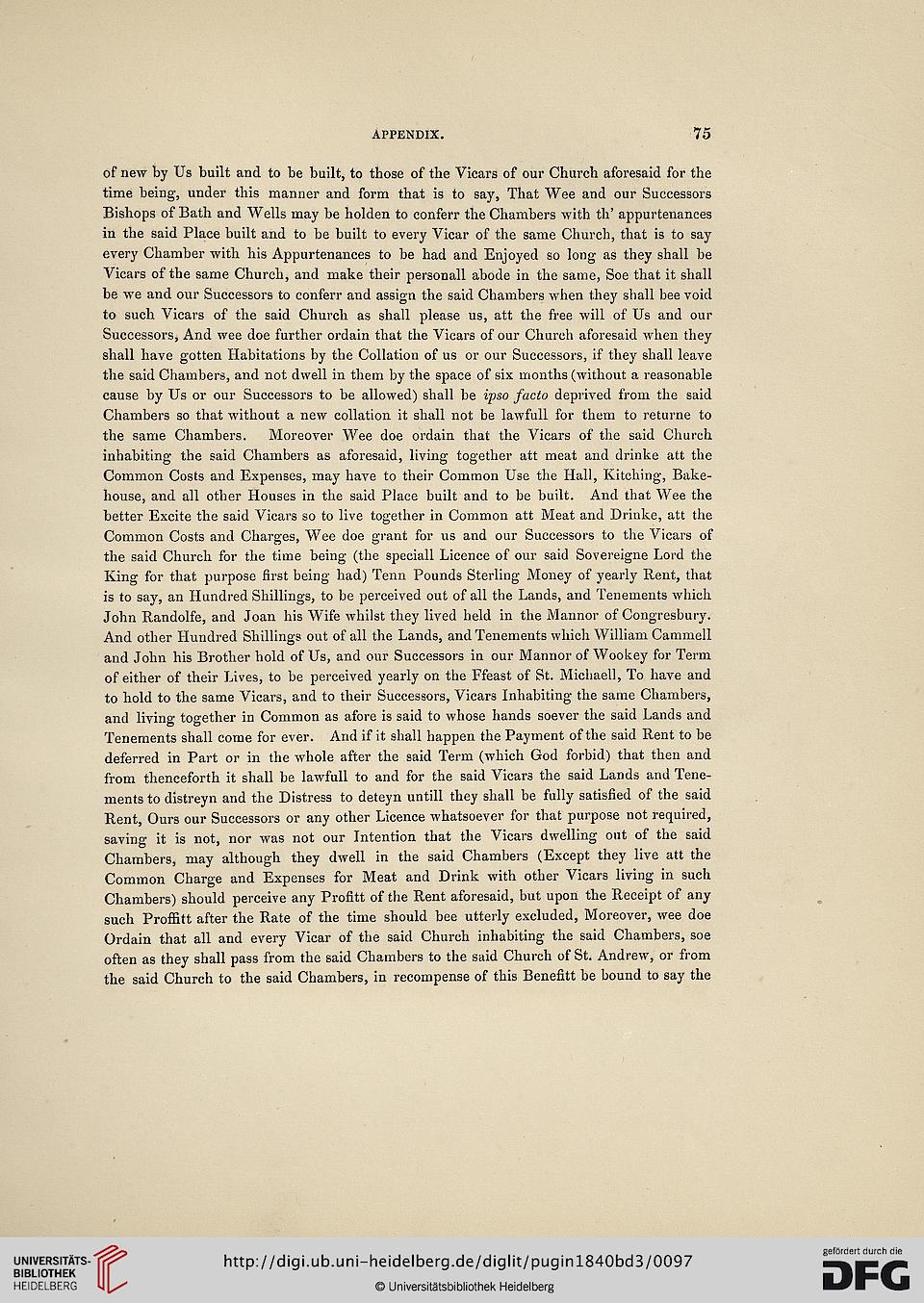 of new by Us built and to be built, to those of the Vicars of our Church aforesaid for the
time being, under tliis manner and form that is to say, That Wee and our Successors
Bishops of Bath and Wells may be holden to conferr the Chambers with th’ appurtenances
in the said Place built and to be built to every Vicar of the same Church, tliat is to say
every Chamber witli his Appurtenances to be had and Enjoyed so long as they shall be
Vicars of the same Chureh, and make their personall abode in the same, Soe that it sliall
be we and our Successors to conferr and assign the said Chambers when they shall bee void
to such Vicars of the said Church as shall please us, att the free will of Us and our
Successors, And wee doe further ordain that tlie Vicars of our Church aforesaid wlien they
shall have gotten Habitations by the Collation of us or our Successors, if tliey shall leave
the said Chambers, and not dwell in them by the space of six months (without a reasonable
cause by Us or our Successors to be allowed) shall be ipso facto deprived from the said
Chambers so that without a new collation it sliall not be lawfull for them to returne to
the same Chambers. Moreover Wee doe ordain that the Vicars of the said Church
inhabiting the said Chambers as aforesaid, living together att meat and drinke att the
Common Costs and Expenses, may have to their Common Use the Hall, Kitching, Bake-
house, and all other Houses in the said Place built and to be built. And that Wee the
better Excite the said Vicars so to live together in Common att Meat and Drinke, att the
Common Costs and Charges, Wee doe grant for us and our Successors to the Vicars of
the said Church for the time being (the speciall Licence of our said Sovereigne Lord the
King for that purpose first being had) Tenn Pounds Sterling Money of yearly Rent, that
is to say, an Hundred Shillings, to be perceived out of all the Lands, and Tenements which
John Randolfe, and Joan his Wife whilst tliey lived held in the Mannor of Congresbury.
And other Hundred Shillings out of all the Lands, and Tenements wliich William Cammell
and John his Brother hold of Us, and our Successors in our Mannor of Wookey for Term
of either of their Lives, to be perceived yearly on the Ffeast of St. Michaeli, To have and
to hold to the same Vicars, and to their Successors, Vicars Inliabiting tlie same Chambers,
and living together in Common as afore is said to whose hands soever the said Lands and
Tenements shall come for ever. And if it shall happen the Payment of the said Rent to be
deferred in Part or in the whole after the said Term (wliich God forbid) that tlien and
from thenceforth it shall be lawfull to and for the said Vicars the said Lands and Tene-
ments to distreyn and the Distress to deteyn untill tliey shall be fully satisfied of the said
Rent, Ours our Successors or any other Licence whatsoever for that purpose not recpiired,
saving it is not, nor was not our Intention that the Vicars dwelling out of the said
Chambers, may although they dwell in the said Chambers (Except they live att the
Common Charge and Expenses for Meat and Drink with other Vicars living in such
Chambers) should perceive any Profitt of the Rent aforesaid, but upon the Receipt of any
such Proffitt after the Rate of the time should bee utterly excluded, Moreover, wee doe
Ordain that all and every Vicar of the saicl Church inhabiting the said Chambers, soe
often as they shall pass from the said Charnbers to the said Church of St. Andrew, or from
the said Church to the said Chambers, in recompense of this Benefitt be bound to say the