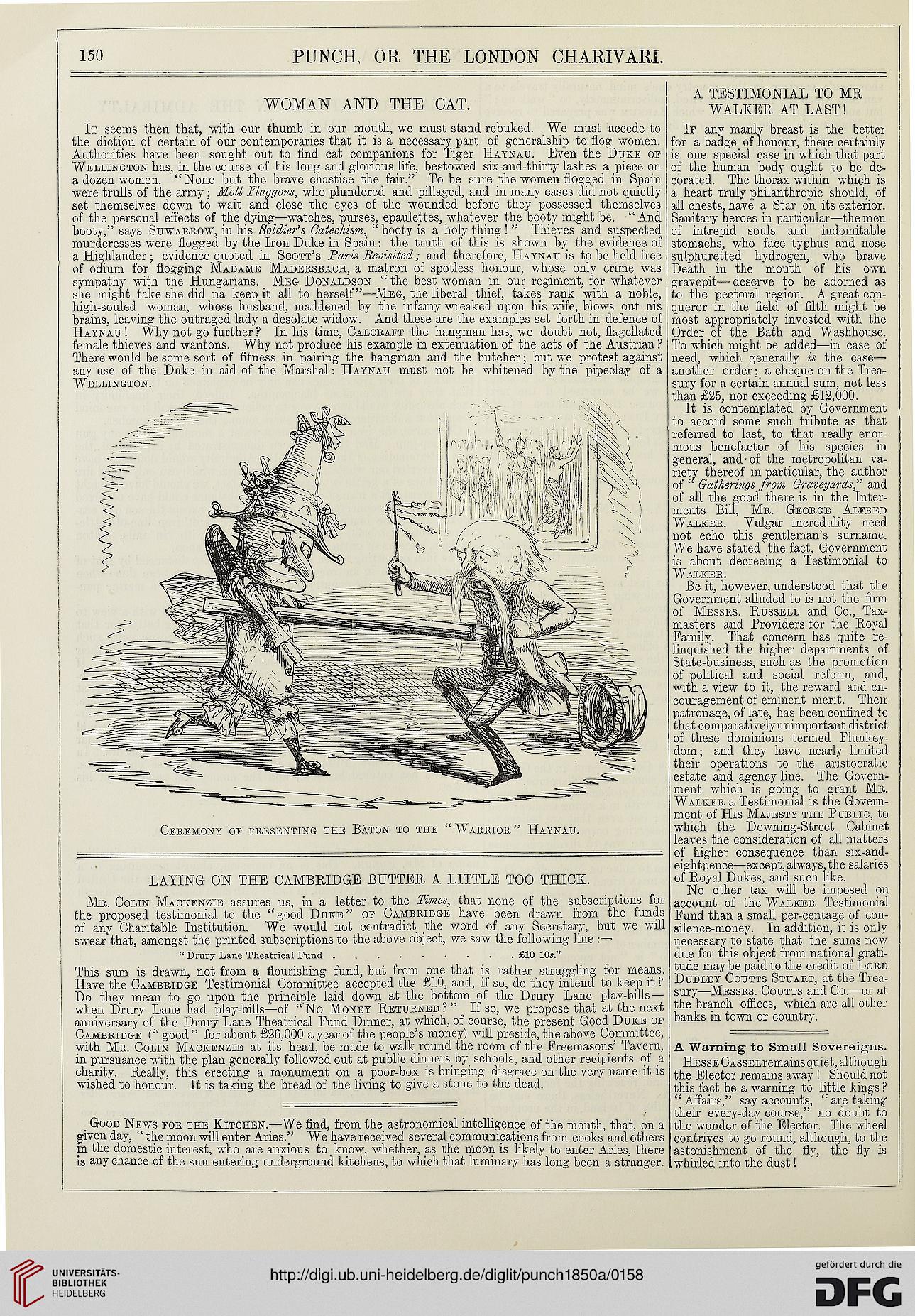 WOMAN AND THE CAT.

It seems then that, with our thumb in our mouth, we must stand rebuked. We must accede to
the diction of certain of our contemporaries that it is a necessary part of generalship to flog women.
Authorities have been sought out to find cat companions for Tiger Haynau. Even the Duke op
Wellington has, in the course of his long and glorious life, bestowed six-and-thirty lashes a piece on
a dozen women. " None but the brave chastise the fair." To be sure the women flogged in Spain
were trulls of the army ; Moll Flaggons, who plundered and pillaged, and in many cases did not quietly
set themselves down to wait and close the eyes of the wounded before they possessed themselves
of the personal effects of the dying—watches, purses, epaulettes, whatever the booty might be. " And
booty," says Suw arrow, in his Soldier's Catechism, "booty is a holy thing ! " Thieves and suspected
murderesses were flogged by the Iron Duke in Spain: the truth of this is shown by the evidence of
a Highlander; evidence quoted in Scott's Paris Revisited; and therefore, Haynau is to be held free
of odium for flogging Madame Madersbach, a matron of spotless honour, whose only crime was

A TESTIMONIAL TO MR
WALKER AT LAST!

If any manly breast is the better
for a badge of honour, there certainly
is one special case in which that part
of the human body ought to be de-
corated. The thorax within which is
a heart truly philanthropic should, of
all chests, have a Star on its exterior.
Sanitary heroes in particular—the men
of intrepid souls and indomitable
stomachs, who face typhus and nose
sulphuretted hydrogen, who brave
Death in the mouth of his own

sympathy with the Hungarians. Meg Donaldson "the best woman in our regiment, for whatever ■ gravepit—deserve to be adorned as

sue might take she did na keep it all to herself"—Meg, the liberal thief, takes rank with a noble,
high-souled woman, whose husband, maddened by the infamy wreaked upon his wife, blows out nis
brains, leaving the outraged lady a desolate widow. And these are the examples set forth in defence of
Haynatj ! Why not go further ? In his time, Calcraft the hangman has, we doubt not, flagellated
female thieves and wantons. Why not produce his example in extenuation of the acts of the Austrian?
There would be some sort of fitness in pairing the hangman and the butcher; but we protest against
any use of the Duke in aid of the Marshal: Haynatj must not be whitened by the pipeclay of a
Wellington.

Ceremony of presenting the Baton to the " Warrior " Haynatj.

LAYING ON THE CAMBRIDGE BUTTER A LITTLE TOO THICK.

Mr. Colin Mackenzie assures us, in a letter to the Times, that none of the subscriptions for
the proposed testimonial to the "good Doke" of Cambridge have been drawn from the funds
of any Charitable Institution. We would not contradict the word of any Secretary, but we will
swear that, amongst the printed subscriptions to the above object, we saw the following line :—

This sum is drawn, not from a flourishing fund, but from one that is rather struggling for means.
Have the Cambridge Testimonial Committee accepted the £10, and, if so, do they intend to keep it ?
Do they mean to go upon the principle laid down at the bottom of the Drury Lane play-bills—
when Drury Lane had play-bills—of " No Money Returned ? " If so, we propose that at the next
anniversary of the Drury Lane Theatrical Eund Dinner, at which, of course, the present Good Duke of
Cambridge (" good" for about £26,000 a year of the people's money) will preside, the above Committee,
with Mr. Colin Mackenzie at its head, be made to walk round the room of the Freemasons' Tavern,
in pursuance with the plan generally followed out at public dinnereby schools, and other recipients of a
charity. Really, this erecting a monument on a poor-box is bringing disgrace on the very name it is
wished to honour. It is taking the bread of the living to give a stone to the dead.

_ Good News for the Kitchen.—We find, from the astronomical intelligence of the month, that, on a
given day, " the moon will enter Aries." We have received several communications from cooks and others
rn the domestic interest, who are anxious to know, whether, as the moon is likely to enter Aries, there
ia any chance of the sun entering underground kitchens, to which that luminary has long been a stranger.

to the pectoral region. A great con-
queror in the field of filth might be
most appropriately invested with the
Order ol the Bath and Washhouse.
To which might be added—in case of
need, which generally is the case—
another order; a cheque on the Trea-
sury for a certain annual sum, not less
than £25, nor exceeding £12,000.

It is contemplated by Government
to accord some such tribute as that
referred to last, to that really enor-
mous benefactor of his species in
general, and-of the metropolitan va-
riety thereof in particular, the author
of Gatherings from Graveyards" and
of all the good there is in the Inter-
ments Bill, Mr. George Alfred
Walker. Vulgar incredulity need
not echo this gentleman's surname.
We have stated the fact. Government
is about decreeing a Testimonial to
Walker.

Be it, however, understood that the
Government alluded to is not the firm
of Messrs. Russell and Co., Tax-
masters and Providers for the Royal
Family. That concern has quite re-
linquished the higher departments of
State-business, such as the promotion
of political and social reform, and,
with a view to it, the reward and en-
couragement of eminent merit. Their
patronage, of late, has been confined to
that comparativelyunimportant district
of these dominions termed Flunkey-
dom; and they have nearly limited
their operations to the aristocratic
estate and agency line. The Govern-
ment which is going to grant Mr.
Walker a Testimonial is the Govern-
ment of His Majesty the Public, to
which the Downing-Street Cabinet
leaves the consideration of all matters
of higher consequence than six-and-
eightpence—except, always, the salaries
of Royal Dukes, and such like.

No other tax will be imposed on
account of the Walker Testimonial
Eund than a small per-centage of con-
silence-money. In addition, it is only
necessary to state that the sums now
due for this object from national grati-
tude may be paid to the credit of Lord
Dudley Coutts Stuart, at the Trea-
sury—Messrs. Cotjtts and Co.—or at
the branch offices, which are all other
banks in town or country.

A Warning to Small Sovereigns.

Hesse CASSELremains quiet, although
the Elector remains away ! Should not
this fact be a warning to little kings ?
" Affairs," say accounts, " are taking"
then every-day course," no doubt to
the wonder of the Elector. The wheel
contrives to go round, although, to the
astonishment of the fly, the fly is
whirled into the dust!