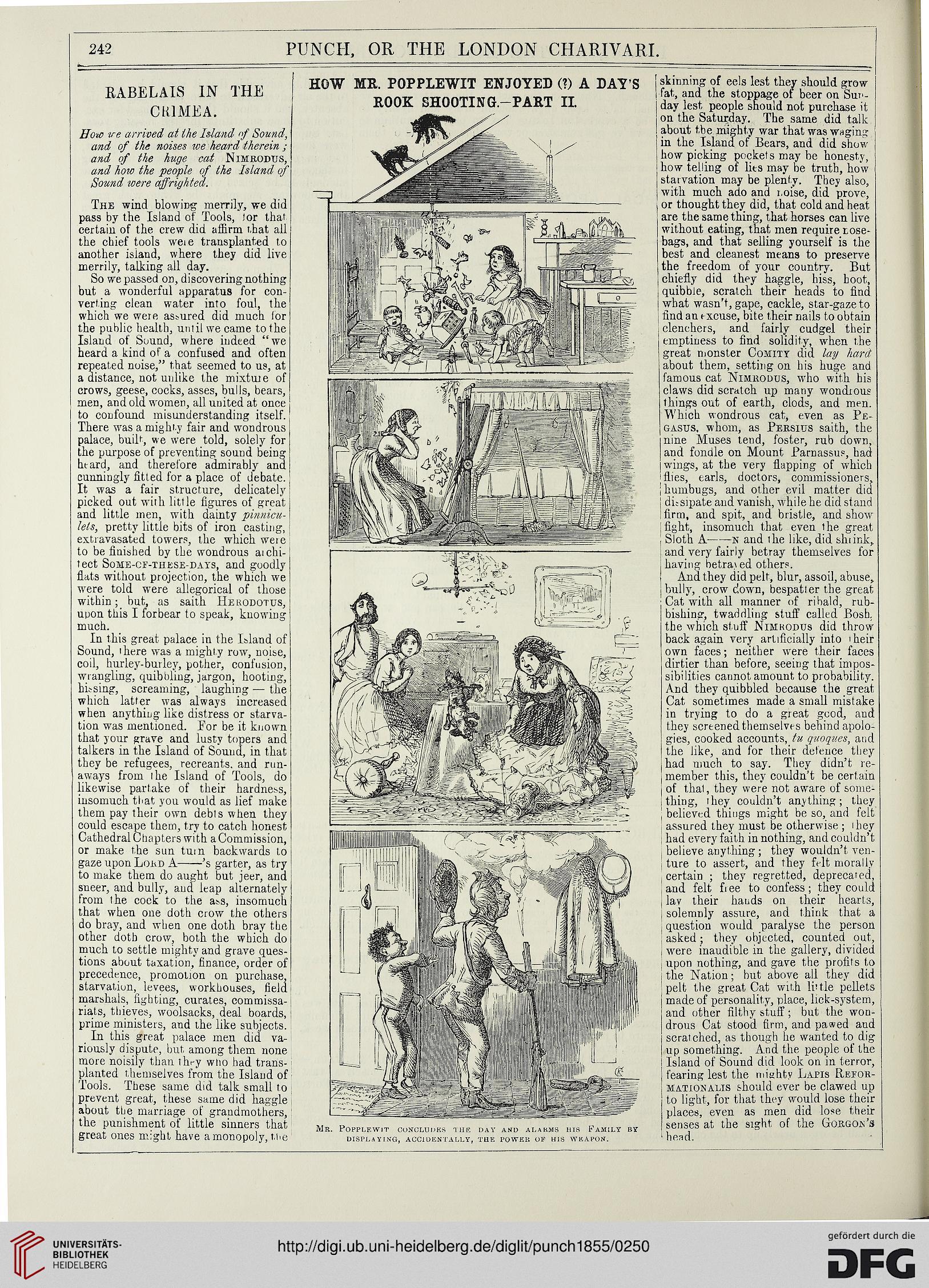 RABELAIS IN THE
CRIMEA.

How ve arrived at the Island of Sound,

and of the noises we heard therein ;

and of the huge cat N imhopus,

and how the people of the Island of

The wind blowing merrily, we did
pass by the Island of Tools, )or that
certain of the crew did affirm that all
the chief tools weie transplanted to
another island, where they did live
merrily, talking all day.

So we passed on, discovering nothing
but a wonderful apparatus for con-
verting clean water into foul, the
which we were assured did much lor
the public health, until we came to the
Island of Sound, where indeed “we
heard a hind of a confused and often
repeated noise,” that seemed to us, at
a distance, not unlike the mixture of
crows, geese, cocks, asses, bulls, bears,
men, and old women, all united at once
to confound misunderstanding itself.
There was a mighty fair and wondrous
palace, built, we were told, solely for
the purpose of preventing sound being
htard, and therefore admirably and
cunningly fitted for a place of debate.
It was a fair structure, delicately:
picked out with little figures of great
and little men, with dainty pinnicu-!
lets, pretty little bits of iron casting,
extravasated towers, the which were
to be finished by the wondrous aichi-
tect Some-cf-these-days, and goodly
flats without projection, the which we
were told were allegorical of those
within; but, as saith Herodotus,
upon this I forbear to speak, knowing
much.

In this great palace in the Island of
Sound, i here was a mighty row, noise,
coil, hurley-burley, pother, confusion,
wrangling, quibbling, jargon, hooting,
hissing, screaming, laughing — the
which latter was always increased
when anything like distress or starva-
tion was mentioned. For be it known
that your grave and lusty topers and
talkers in the Island of Sound, in that
they be refugees, recreants, and run-
aways from the Island of Tools, do
likewise partake of their hardness,
insomuch that you would as lief make
them pay their own debts when they
could escape them, try to catch honest
Cathedral Chapters with aCommission,
or make the sun turn backwards to

to make them do aught but jeer, and
sneer, and bully, and leap alternately
from the cock to the ass, insomuch
that when one doth crow the others
do bray, and when one doth bray the
other doth crow, both the which do
much to settle mighty and grave ques-
tions about taxation, finance, order of
precedence, promotion on purchase,
starvation, levees, workhouses, field
marshals, fighting, curates, commissa-
riats, thieves, woolsacks, deal boards, j
prime ministers, and the like subjects.

_ In this great palace men did. va-
riously dispute, but among them none
more noisily than thry who had trans-
planted themselves from the Island of
Tools. These same did talk small to
prevent great, these same did haggle
about the marriage of grandmothers,
the punishment of little sinners that
great ones might have a monopoly, ti.e

Mr. Popplewit concludes the day and alarms his Family by

DISPLAYING, ACCIDENTALLY, THE POWER OF HIS WEAPON.

skinning of eels lest they should grow
fat, and the stoppage of beer on Sun-
day lest people should not purchase it
on the Saturday. The same did talk
about the mighty war that was waging
in the Island of Bears, and did show-
how picking pockets may be honesty,
how telling of lies may be truth, how
starvation may be plenty. They also,
with much ado and noise, did prove,
or thought they did, that cold and heat
are the same thing, that horses can live
without eating, that, men require nose-
bags, and that selling yourself is the
best and cleanest means to preserve
the freedom of your country. But
chiefly did they haggle, hiss, boot,
quibble, scratch their heads to find
what wasn't, gape, cackle, star-gaze to
find an excuse, bite their nails to obtain
I clenehers, and fairly cudgel their
emptiness to find solidity, when the
great monster Comity did lay hard
about them, setting on his huge and
famous cat Nimrodus, wrho with his
claws did scratch up many wondrous
lliings out of earth, clods, and men.
Which wondrous cat, even as Pe-
gasus. whom, as Persius saith, the
nine Muses tend, foster, rub down,
and fondle on Mount Parnassus, had
wings, at the very flapping of which
flies, earls, doctors, commissioners,

; humbugs, and other evil matter did
I dissipate and vanish, while he did stand
firm, and spit, and bristle, and show
fight, insomuch that even i he great

and very fairly betray themselves for
having betraied others.

! And they did pelt, blur, assoil, abuse,

: bully, crow down, bespatier the great
Cat with all manner of ribald, rub-
bishing, twaddling stuff called Bosh,
the which stuff Nimrodus did throw
back again very artificially into 'heir
own faces; neither were their faces
dirtier than before, seeing that impos-
sibilities cannot amount to probability.
And they quibbled because the great
Cat sometimes made a small mistake
in trying to do a great good, and
they screened themselves behind apolo-
gies, cooked accounts, tu quoques, and
the like, and for their defence they
had much to say. They didn’t re-
member this, they couldn’t be certain
of thal, they were not aware of some-
thing, they couldn’t anything; they
believed things might be so, and felt
assured they must be otherwise ; they
had every faith in nothing, and couldn’t
believe anything; they wouldn’t ven-
ture to assert, and they felt morally
I certain ; they regretted, deprecated,
and felt fiee to confess; they could
lav their hands on their hearts,
i solemnly assure, aod think that a
, question would paralyse the person
: asked ; they objected, counted out,
i were inaudible in the gallery, divided
upon nothing, and gave the profits to
the Nation; but above all they did
pelt the great Cat with lb tie pellets
j made of personality, place, lick-system,
and other filthy stuff; but the won-
drous Cat stood firm, and pawed and
scratched, as though he wanted to dig
up something. And the people of the
Island of Sound did look on in terror,
fearing lest the mighty Lapis Refor-
matioualis should ever be clawed up
to light, for that they would lose their
places, even as men did lose their
senses at the sight of the Gorgojs’s
1 head.