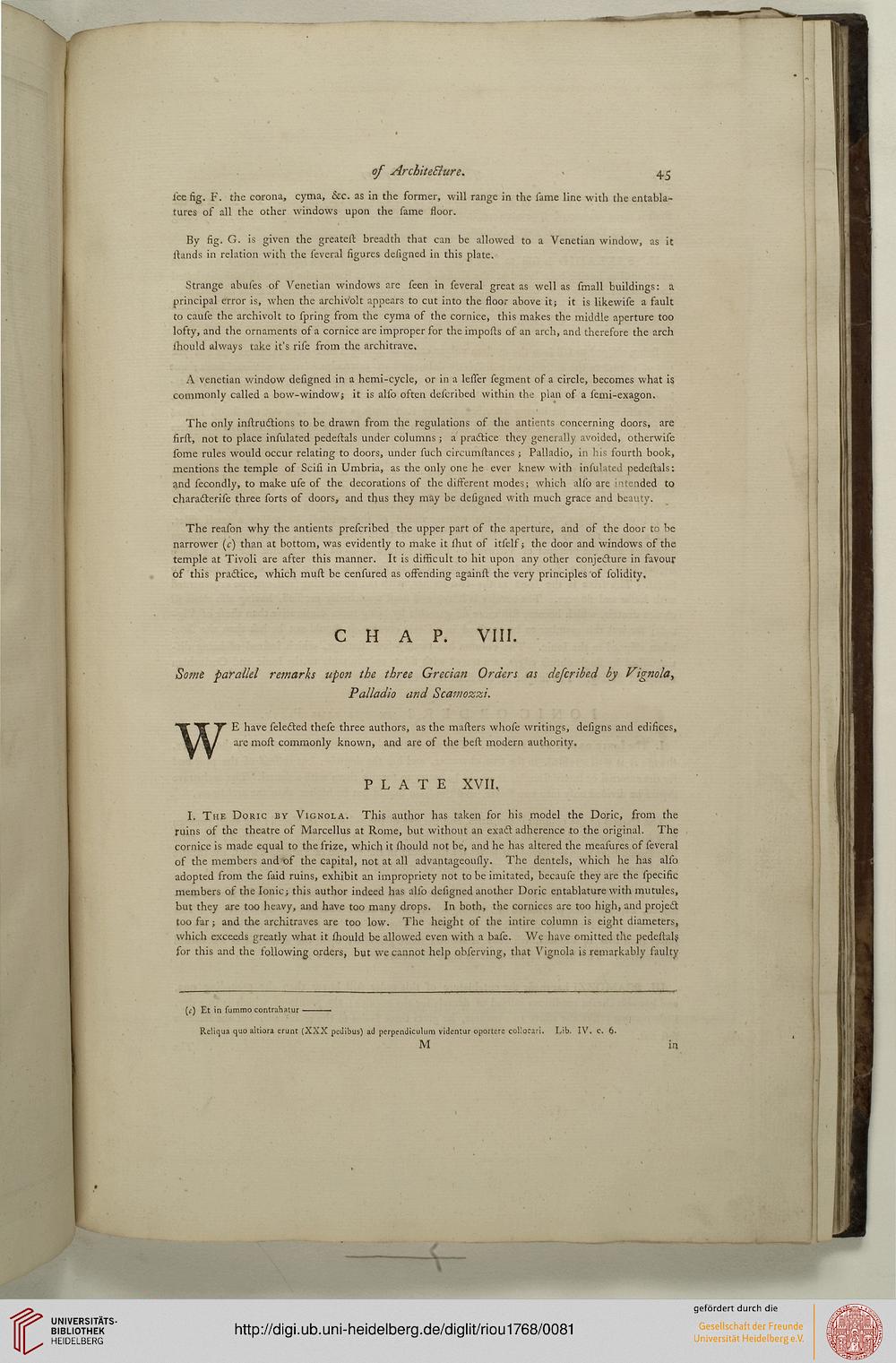 Scroll
OCR fulltext
Information about OCR text
os Architecture. - 4.5
ice fig. F. the corona, cyma, &c. as in the sormer, will range in the same line with the entabla-
tures of all the other windows upon the same floor.
By sig. O. is given the greatest breadth that can be allowed to a Venetian window, as it
ltands in relation with the several sigures designcd in this plate.
Strange abuses of Venetian windows arc seen in several great as well as small buildings: a
principal error is, when the arcbiv'olt appears to cut into the floor above it; it is likewise a fault
to cause the arcbivolt to spring srom the cyma of the cornice, this makes the middle aperture too
lofty, and the ornaments of a cornice are improper for the imports of an arch, and therefore the arch
ihould always take it's rise from the architrave.
A Venetian window dcligned in a hemi-cyele, or in a lelier segment of a circle, becomes what is
commonly called a bow-window* it is also often described within the plan os a semi-exagon.
The only instructions to be drawn srom the regulations of the antients concerning doors, are
first, not to place insulated pedestals under columns ; a practice they generally avoided, otherwise
iome rules would occur relating to doors, under such circumsiances ; Palladio, in his fourth book,
mentions the temple of Scisi in Urnbria, as the only one he ever knew with insulated pedcitals:
and secondly, to make use os the decorations of the different modes; which also are intended to
charaftcrise three sorts of doors, and thus they may be desigued with much grace and beauty.
The reason why the antients prescribed the upper part of the aperture, and of the door to be
narrower (c) than at bottom, was evidently to make it {hut of itlclf; the door and windows of the
temple at Ttvoli are after this manner. It is disficult to hit upon any other conjecture in favour
of this practice, which mult be censured as osfending against the very principles of solidity.

CHAP. VIII.
Some parallel remarks upon the three Grecian Orders as defcribed by Vignola,
Palladio and Scamozzi.

E have selected these three authors, as the masters whose writings, designs and edisices,
are most commonly known, and are of the bed modern authority.

PLATE XVII,
I. The Doric by Vignola. This author has taken sor his .model the Doric, srom the
ruins of the theatre of Marcellus at Rome, but without an exa<5t adherence to the original. The
cornice is made equal to the srize, which it ssiould not be, and he has altered the measurcs of several
of the members and of the capital, not at all advantagcousiy. The dentels, which he has also
adopted from the said ruins, exhibit an impropriety not to be imitated, because they are the Ipecific
members of the Ionic; this author indeed has also dcligned another Doric entablature with mntules,
but they are too heavy, and have too many drops. In both, the cornices are too high, and project,
too far; and die architraves are too low. The height os the Intire column is eight diameters,
which exceeds greatly what it should be allowed even with a bale. We have omitted the pedcfialj
sor this and the following orders, but we cannot help observing, that Vignola is remarkably faulty