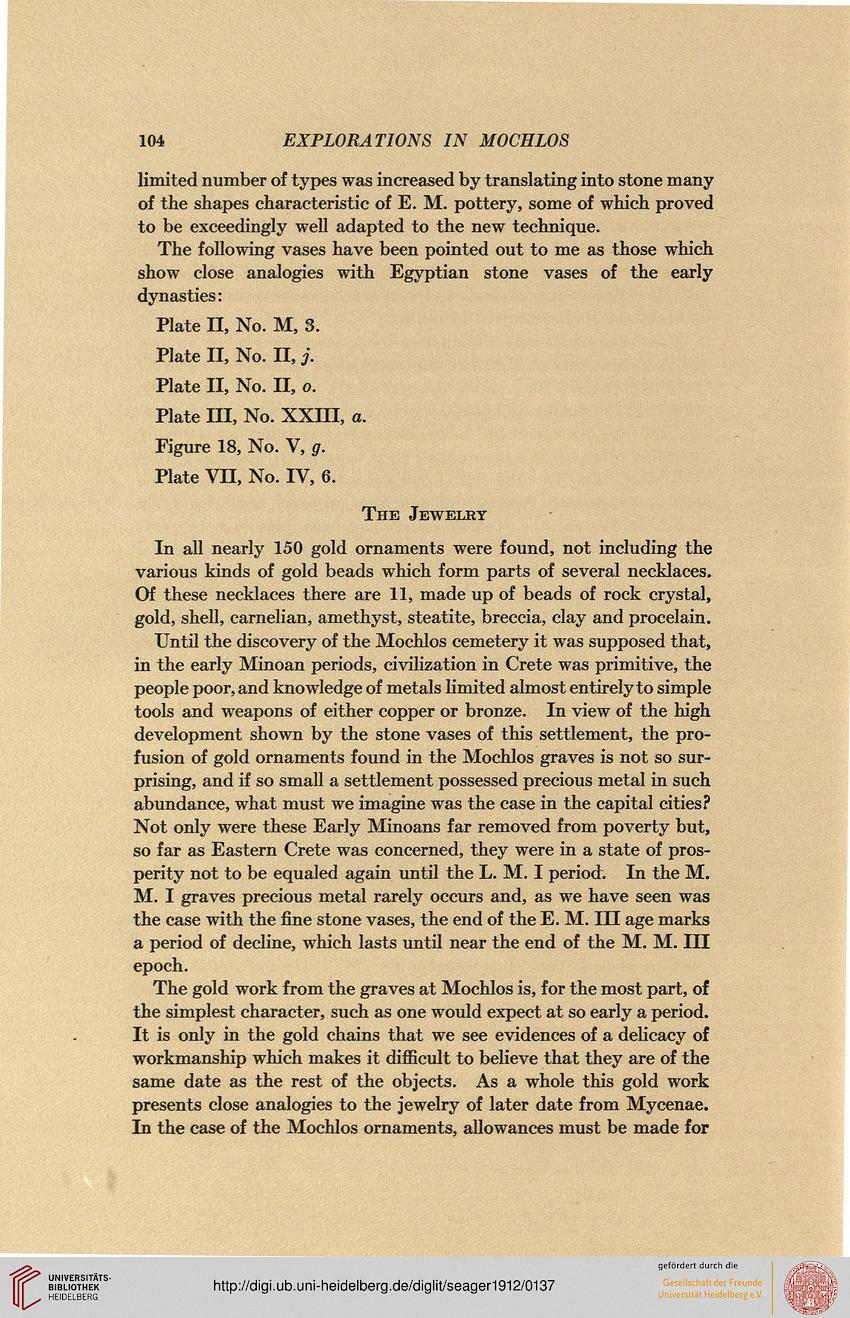 limited number of types was increased by translating into stone many
of the shapes characteristic of E. M. pottery, some of which proved
to be exceedingly well adapted to the new technique.

The following vases have been pointed out to me as those which
show close analogies with Egyptian stone vases of the early
dynasties:

In all nearly 150 gold ornaments were found, not including the
various kinds of gold beads which form parts of several necklaces.
Of these necklaces there are 11, made up of beads of rock crystal,
gold, shell, carnelian, amethyst, steatite, breccia, clay and procelain.

Until the discovery of the Mochlos cemetery it was supposed that,
in the early Minoan periods, civilization in Crete was primitive, the
people poor, and knowledge of metals limited almost entirely to simple
tools and weapons of either copper or bronze. In view of the high
development shown by the stone vases of this settlement, the pro-
fusion of gold ornaments found in the Mochlos graves is not so sur-
prising, and if so small a settlement possessed precious metal in such
abundance, what must we imagine was the case in the capital cities?
Not only were these Early Minoans far removed from poverty but,
so far as Eastern Crete was concerned, they were in a state of pros-
perity not to be equaled again until the L. M. I period. In the M.
M. I graves precious metal rarely occurs and, as we have seen was
the case with the fine stone vases, the end of the E. M. Ill age marks
a period of decline, which lasts until near the end of the M. M. Ill
epoch.

The gold work from the graves at Mochlos is, for the most part, of
the simplest character, such as one would expect at so early a period.
It is only in the gold chains that we see evidences of a delicacy of
workmanship which makes it difficult to believe that they are of the
same date as the rest of the objects. As a whole this gold work
presents close analogies to the jewelry of later date from Mycenae.
In the case of the Mochlos ornaments, allowances must be made for