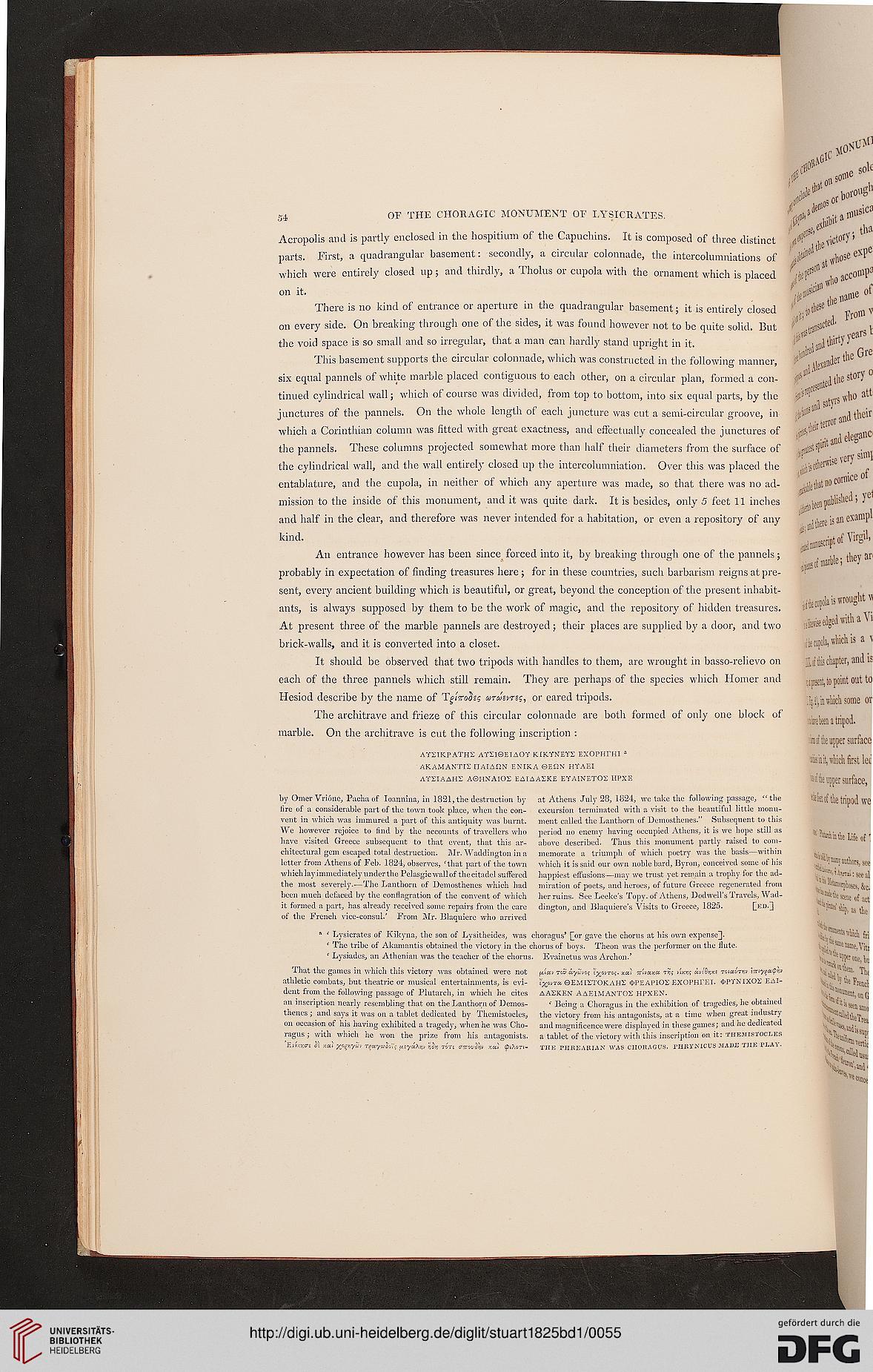 s4 OF THE CHORAGIC MONUMENT OF LYSICRATES.

Acropolis and is partly enclosed in the hospitium of the Capuchins. It is composed of three distinct
parts. First, a quadrangular basement: secondly, a circular colonnade, the intercolumniations of
which were entirely closed up ; and thirdly, a Tholus or cupola with the ornament which is placed

There is no kind of entrance or aperture in the quadrangular basement; it is entirely closed
on every side. On breaking through one of the sides, it was found however not to be quite solid. But
the void space is so small and so irregular, that a man can hardly stand upright in it.

This basement supports the circular colonnade, which was constructed in the following manner,
six equal pannels of white marble placed contiguous to each other, on a circular plan, formed a con-
tinued cylindrical wall; which of course was divided, from top to bottom, into six equal parts, by the
junctures of the pannels. On the whole length of each juncture was cut a semi-circular groove, in
which a Corinthian column was fitted with great exactness, and effectually concealed the junctures of
the pannels. These columns projected somewhat more than half their diameters from the surface of
the cylindrical wall, and the wall entirely closed up the intercolumniation. Over this was placed the
entablature, and the cupola, in neither of which any aperture was made, so that there was no ad-
mission to the inside of this monument, and it was quite dark. It is besides, only 5 feet 11 inches
and half in the clear, and therefore was never intended for a habitation, or even a repository of any
kind.

An entrance however has been since forced into it, by breaking through one of the pannels;
probably in expectation of finding treasures here; for in these countries, such barbarism reigns at pre-
sent, every ancient building which is beautiful, or great, beyond the conception of the present inhabit-
ants, is always supposed by them to be the work of magic, and the repository of hidden treasures.
At present three of the marble pannels are destroyed; their places are supplied by a door, and two
brick-walls, and it is converted into a closet.

It should be observed that two tripods with handles to them, are wrought in basso-relievo on
each of the three pannels which still remain. They are perhaps of the species which Homer and
Hesiod describe by the name of Tgitfodsg arcoivrsg, or eared tripods.

The architrave and frieze of this circular colonnade are both formed of only one block of
marble. On the architrave is cut the following inscription :

by OmerVrione, Pacha of Ioannina, in 1821, the destruction by
fire of a considerable part of the town took place, when the con-
vent in which was immured a part of this antiquity was burnt.
We however rejoice to find by the accounts of travellers who
have visited Greece subsequent to that event, that this ar-
chitectural gem escaped total destruction. Mr. Waddington in a
letter from Athens of Feb. 1824, observes, 'that part of the town
which lay immediately under the Pelasgic wall of the citadel suffered
the most severely..—The Lanthorn of Demosthenes which had
been much defaced by the conflagration of the convent of which
it formed a part, has already received some repairs from the care
of the French vice-consul.' From Mr. Blaquiere who arrived

at Athens July 28, 1824, we take the following passage, "the
excursion terminated with a visit to the beautiful little monu-
ment called the Lanthorn of Demosthenes." Subsequent to this
period no enemy having occupied Athens, it is we hope still as
above described. Thus this monument partly raised to com-
memorate a triumph of which poetry was the basis—within
which it is said our own noble bard, Byron, conceived some of his
happiest effusions—may we trust yet remain a trophy for the ad-
miration of poets, and heroes, of future Greece regenerated from
her ruins. See Leeke's Topy. of Athens, Dodwell's Travels, Wad-
dington, and Blaquierc's Visits to Greece, 1825. [ED-]

se edged with a Vi

-chapter, and is
t, to point out to

it, which first lee

tot the tripod we

•' Lysicrates of Kikyna, the son of Lysitheides, was choragus' [[or gave the chorus at his own expense].
' The tribe of Akamantis obtained the victory in the chorus of boys. Theon was the performer on the flute.
' Lysiades, an Athenian was the teacher of the chorus. Evainetus was Archon.'

That the games in which this victory was obtained were not
athletic combats, but theatric or musical entertainments, is evi-
dent from the following passage of Plutarch, in which he cites
an inscription nearly resembling that on the Lanthorn of Demos-
thenes ; and says it was on a tablet dedicated by Themistocles,
on occasion of his having exhibited a tragedy, when he was Cho-
ragus ; with which he won the prize from his antagonists.

' Being a Choragus in the exhibition of tragedies, he obtained
the victory from his antagonists, at a time when great industry
and magnificence were displayed in these games; and he dedicated
a tablet of the victory with this inscription on it: theiuistocles
THE PHREARIAN WAS CHORAGUS. rHRYNICUS MADE THE PLAY.