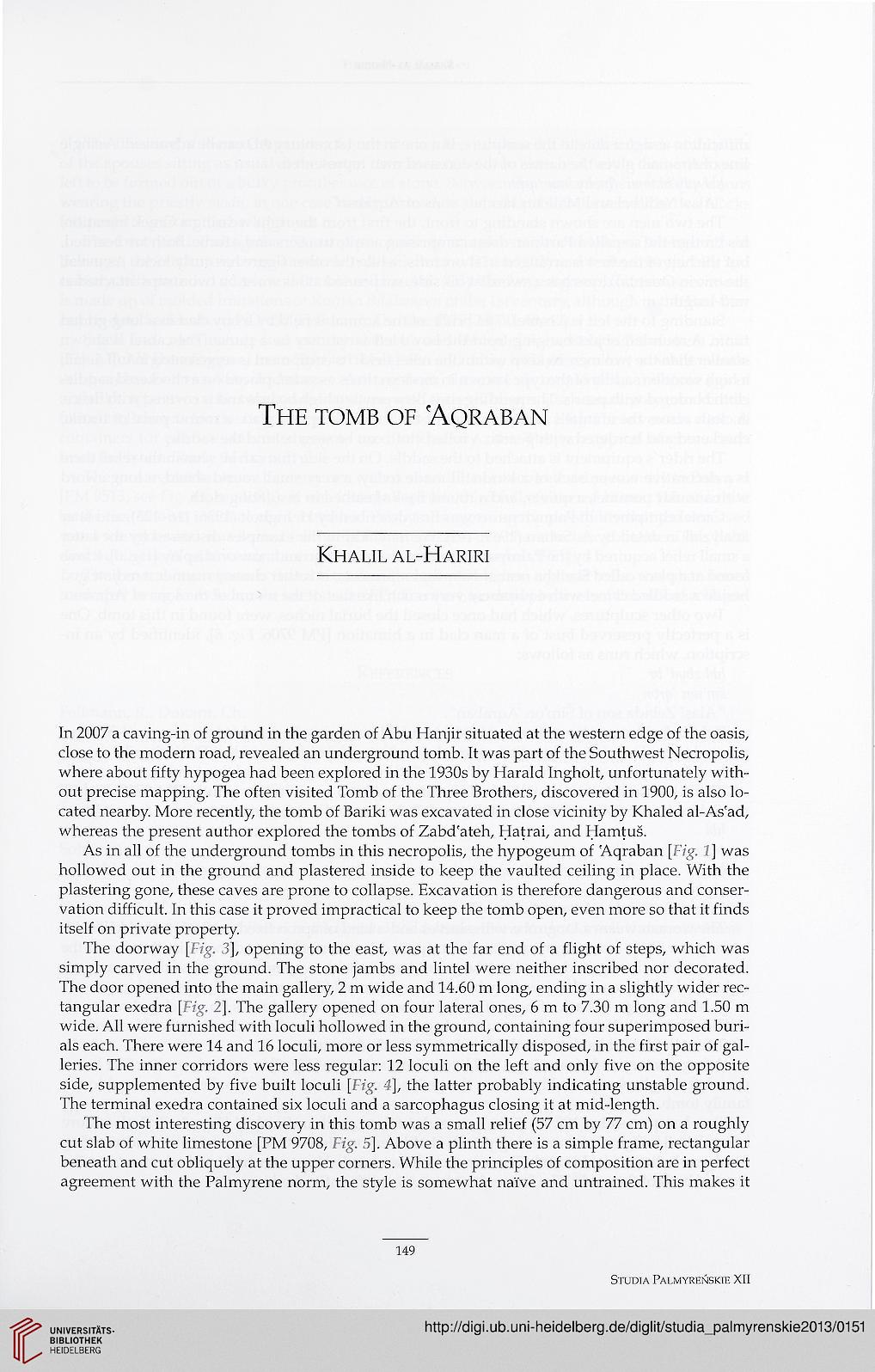 In 2007 a caving-in of ground in the garden of Abu Hanjir situated at the western edge of the oasis,
close to the modern road, revealed an underground tomb. It was part of the Southwest Necropolis,
where about fifty hypogea had been explored in the 1930s by Harald Ingholt, unfortunately with-
out precise mapping. The often visited Tomb of the Three Brothers, discovered in 1900, is also lo-
cated nearby. Morę recently, the tomb of Bariki was excavated in close vicinity by Khaled al-As'ad,
whereas the present author explored the tombs of Zabd'ateh, Hatrai, and Hamtuś.

As in all of the underground tombs in this necropolis, the hypogeum of Aąraban [Fig. 1] was
hollowed out in the ground and plastered inside to keep the vaulted ceiling in place. With the
plastering gone, these caves are prone to collapse. Excavation is therefore dangerous and conser-
vation difficult. In this case it proved impractical to keep the tomb open, even morę so that it finds
itself on private property.

The doorway [Fig. 3], opening to the east, was at the far end of a flight of steps, which was
simply carved in the ground. The stone jambs and lintel were neither inscribed nor decorated.
The door opened into the main gallery, 2 m wide and 14.60 m long, ending in a slightly wider rec-
tangular exedra [Fig. 2], The gallery opened on four lateral ones, 6 m to 7.30 m long and 1.50 m
wide. All were furnished with loculi hollowed in the ground, containing four superimposed buri-
als each. There were 14 and 16 loculi, morę or less symmetrically disposed, in the first pair of gal-
leries. The inner corridors were less regular: 12 loculi on the left and only five on the opposite
side, supplemented by five built loculi [Fig. 4], the latter probably indicating unstable ground.
The terminal exedra contained six loculi and a sarcophagus closing it at mid-length.

The most interesting discovery in this tomb was a smali relief (57 cm by 77 cm) on a roughly
cut slab of white limestone [PM 9708, Fig. 5]. Above a plinth there is a simple frame, rectangular
beneath and cut obliąuely at the upper corners. While the principles of composition are in perfect
agreement with the Palmyrene norm, the style is somewhat na'ive and untrained. This makes it