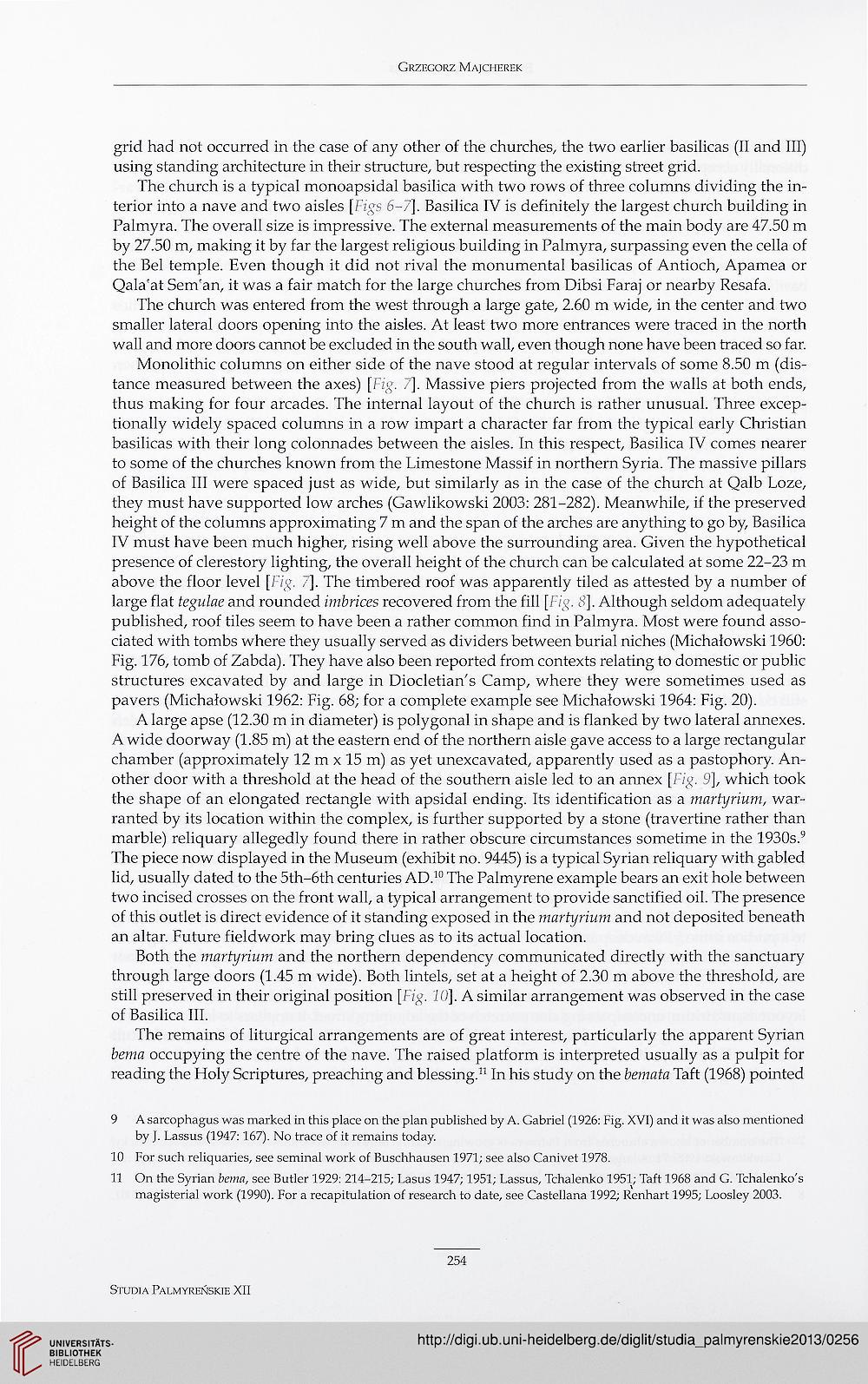 grid had not occurred in the case of any other of the churches, the two earlier basilicas (II and III)
using standing architecture in their structure, but respecting the existing Street grid.

The church is a typical monoapsidal basilica with two rows of three columns dividing the in-
terior into a nave and two aisles [Figs 6-7], Basilica IV is definitely the largest church building in
Palmyra. The overall size is impressive. The external measurements of the main body are 47.50 m
by 27.50 m, making it by far the largest religious building in Palmyra, surpassing even the cella of
the Bel tempie. Even though it did not rival the monumental basilicas of Antioch, Apamea or
Qała'at SenTan, it was a fair match for the large churches from Dibsi Faraj or nearby Resafa.

The church was entered from the west through a large gate, 2.60 m wide, in the center and two
smaller lateral doors opening into the aisles. At least two morę entrances were traced in the north
wali and morę doors cannot be excluded in the south wali, even though nonę have been traced so far.

Monolithic columns on either side of the nave stood at regular intervals of some 8.50 m (dis-
tance measured between the axes) [Fig. 7]. Massive pierś projected from the walls at both ends,
thus making for four arcades. The internal layout of the church is rather unusual. Three excep-
tionally widely spaced columns in a row impart a character far from the typical early Christian
basilicas with their long colonnades between the aisles. In this respect, Basilica IV comes nearer
to some of the churches known from the Limestone Massif in northern Syria. The massive pillars
of Basilica III were spaced just as wide, but similarly as in the case of the church at Qalb Loże,
they must have supported Iow arches (Gawlikowski 2003: 281-282). Meanwhile, if the preserved
height of the columns approximating 7 m and the span of the arches are anything to go by, Basilica
IV must have been much higher, rising well above the surrounding area. Given the hypothetical
presence of clerestory lighting, the overall height of the church can be calculated at some 22-23 m
above the floor level [Fig, 7], The timbered roof was apparently tiled as attested by a number of
large fiat tegulae and rounded imbrices recovered from the fili [Fig. 8], Although seldom adeąuately
published, roof tiles seem to have been a rather common find in Palmyra. Most were found asso-
ciated with tombs where they usually served as dividers between burial niches (Michałowski 1960:
Fig. 176, tomb of Zabda). They have also been reported from contexts relating to domestic or public
structures excavated by and large in Diocletian's Camp, where they were sometimes used as
pavers (Michałowski 1962: Fig. 68; for a complete example see Michałowski 1964: Fig. 20).

A large apse (12.30 m in diameter) is polygonal in shape and is flanked by two lateral annexes.
A wide doorway (1.85 m) at the eastern end of the northern aisle gave access to a large rectangular
chamber (approximately 12 m x 15 m) as yet unexcavated, apparently used as a pastophory. An-
other door with a threshold at the head of the Southern aisle led to an annex [F/y. 9], which took
the shape of an elongated rectangle with apsidal ending. Its identification as a martyrium, war-
ranted by its location within the complex, is further supported by a stone (travertine rather than
marble) reliąuary allegedly found there in rather obscure circumstances sometime in the 1930s.9
The piece no w display ed in the Museum (exhibit no. 9445) is a typical Syrian reliąuary with gabled
lid, usually dated to the 5th-6th centuries AD.10 The Palmyrene example bears an exit hole between
two incised crosses on the front wali, a typical arrangement to provide sanctified oil. The presence
of this outlet is direct evidence of it standing exposed in the martyrium and not deposited beneath
an altar. Futurę fieldwork may bring clues as to its actual location.

Both the martyrium and the northern dependency communicated directly with the sanctuary
through large doors (1.45 m wide). Both lintels, set at a height of 2.30 m above the threshold, are
stiłl preserved in their original position [Fig. 20]. A similar arrangement was observed in the case
of Basilica III.

The remains of liturgical arrangements are of great interest, particularly the apparent Syrian
bema occupying the centre of the nave. The raised platform is interpreted usually as a pulpit for
reading the Holy Scriptures, preaching and blessing.11 In his study on the bemata Taft (1968) pointed