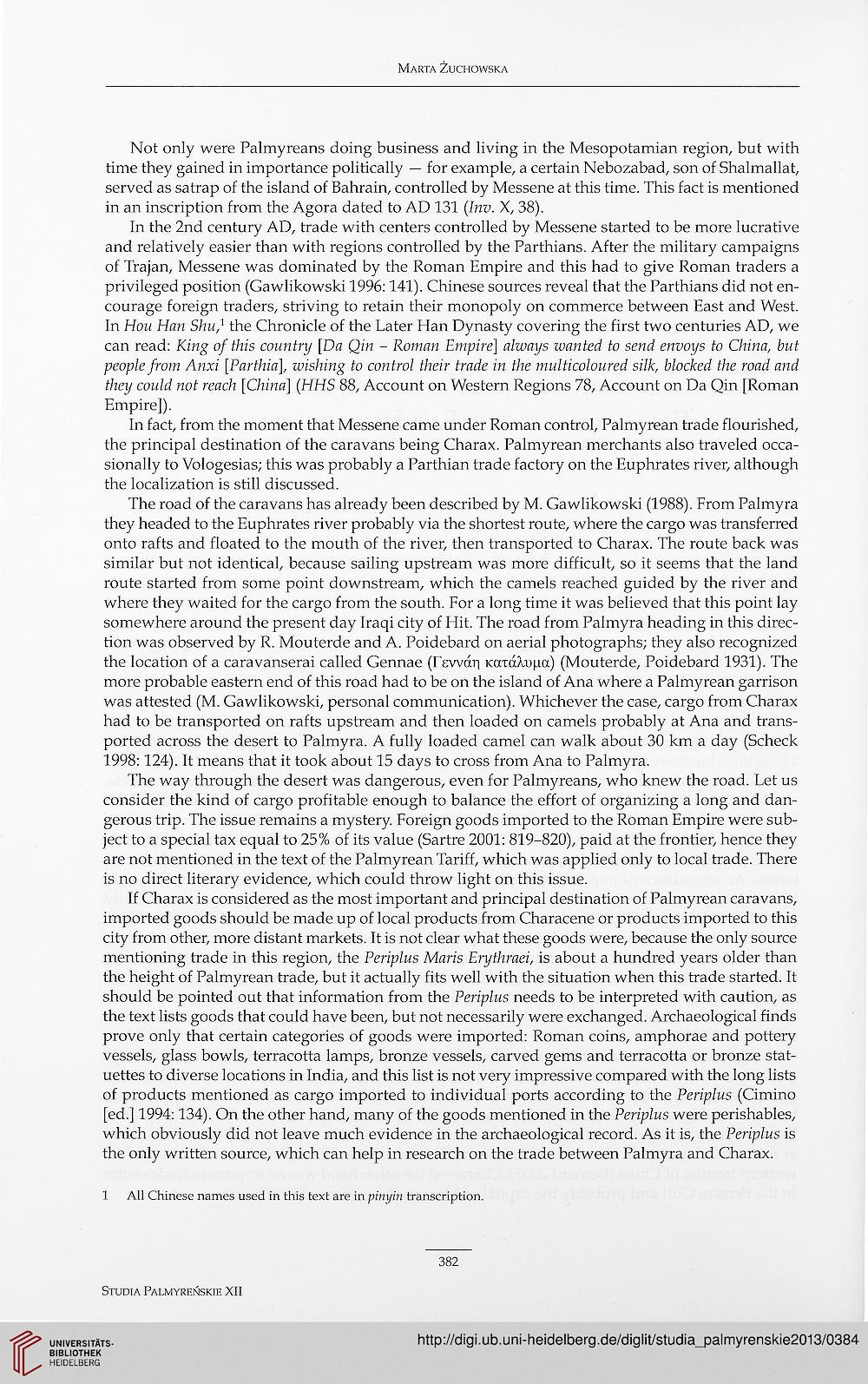 Not only were Palmyreans doing business and living in the Mesopotamian region, but with
time they gained in importance politically — for example, a certain Nebozabad, son of Shalmallat,
served as satrap of the island of Bahrain, controlled by Messene at this time. This fact is mentioned
in an inscription from the Agora dated to AD 131 (Inv. X, 38).

In the 2nd century AD, trade with centers controlled by Messene started to be morę lucrative
and relatively easier than with regions controlled by the Parthians. After the military campaigns
of Trajan, Messene was dominated by the Roman Empire and this had to give Roman traders a
priyileged position (Gawlikowski 1996:141). Chinese sources reveal that the Parthians did not en~
courage foreign traders, striving to retain their monopoly on commerce between East and West.
In Hou Han Shu} the Chronicie of the Later Han Dynasty covering the first two centuries AD, we
can read: King of this country [Da Qin - Roman Empire] always wanted to send envoys to China, hut
people from Anxi [Parthia], wishing to control their trade in the multicoloured silk, blocked the road and
they could not reach [China] (HHS 88, Account on Western Regions 78, Account on Da Qin [Roman
Empire]).

In fact, from the moment that Messene came under Roman control, Palmyrean trade flourished,
the principal destination of the carayans being Charax. Palmyrean merchants also traveled occa-
sionally to Vologesias; this was probably a Parthian trade factory on the Euphrates river, although
the localization is still discussed.

The road of the carayans has already been described by M. Gawlikowski (1988). From Palmyra
they headed to the Euphrates river probably via the shortest route, where the cargo was transferred
onto rafts and floated to the mouth of the river, then transported to Charax. The route back was
similar but not identical, because sailing upstream was morę difficult, so it seems that the land
route started from some point downstream, which the camels reached guided by the river and
where they waited for the cargo from the south. For a long time it was bełieved that this point lay
somewhere around the present day Iraqi city of Hit. The road from Palmyra heading in this direc-
tion was obseryed by R. Mouterde and A. Poidebard on aerial photographs; they also recognized
the location of a caravanserai called Gennae (Tswari Kardkupa) (Mouterde, Poidebard 1931). The
morę probable eastern end of this road had to be on the island of Ana where a Palmyrean garrison
was attested (M. Gawlikowski, personal communication). Whicheyer the case, cargo from Charax
had to be transported on rafts upstream and then loaded on camels probably at Ana and trans-
ported across the desert to Palmyra. A fully loaded camel can walk about 30 km a day (Scheck
1998:124). It means that it took about 15 days to cross from Ana to Palmyra.

The way through the desert was dangerous, even for Palmyreans, who knew the road. Let us
consider the kind of cargo profitable enough to balance the effort of organizing a long and dan-
gerous trip. The issue remains a mystery. Foreign goods imported to the Roman Empire were sub-
ject to a special tax eąual to 25% of its value (Sartre 2001: 819-820), paid at the frontier, hence they
are not mentioned in the text of the Palmyrean Tariff, which was applied only to local trade. There
is no direct literary evidence, which could throw light on this issue.

If Charax is considered as the most important and principal destination of Palmyrean carayans,
imported goods should be madę up of local products from Characene or products imported to this
city from other, morę distant markets. It is not elear what these goods were, because the only source
mentioning trade in this region, the Peńplus Maris Erythraei, is about a hundred years older than
the height of Palmyrean trade, but it actually fits well with the situation when this trade started. It
should be pointed out that information from the Peńplus needs to be interpreted with caution, as
the text lists goods that could have been, but not necessarily were exchanged. Archaeological finds
prove only that certain categories of goods were imported: Roman coins, amphorae and pottery
yessels, glass bowls, terracotta lamps, bronze yessels, carved gems and terracotta or bronze stat-
uettes to diverse locations in India, and this list is not very impressive compared with the long lists
of products mentioned as cargo imported to indiyidual ports according to the Peńplus (Cimino
[ed.] 1994:134). On the other hand, many of the goods mentioned in the Peńplus were perishables,
which obyiously did not leave much evidence in the archaeological record. As it is, the Peńplus is
the only written source, which can help in research on the trade between Palmyra and Charax.

1 Ali Chinese names used in this text are in pinyin transcription.