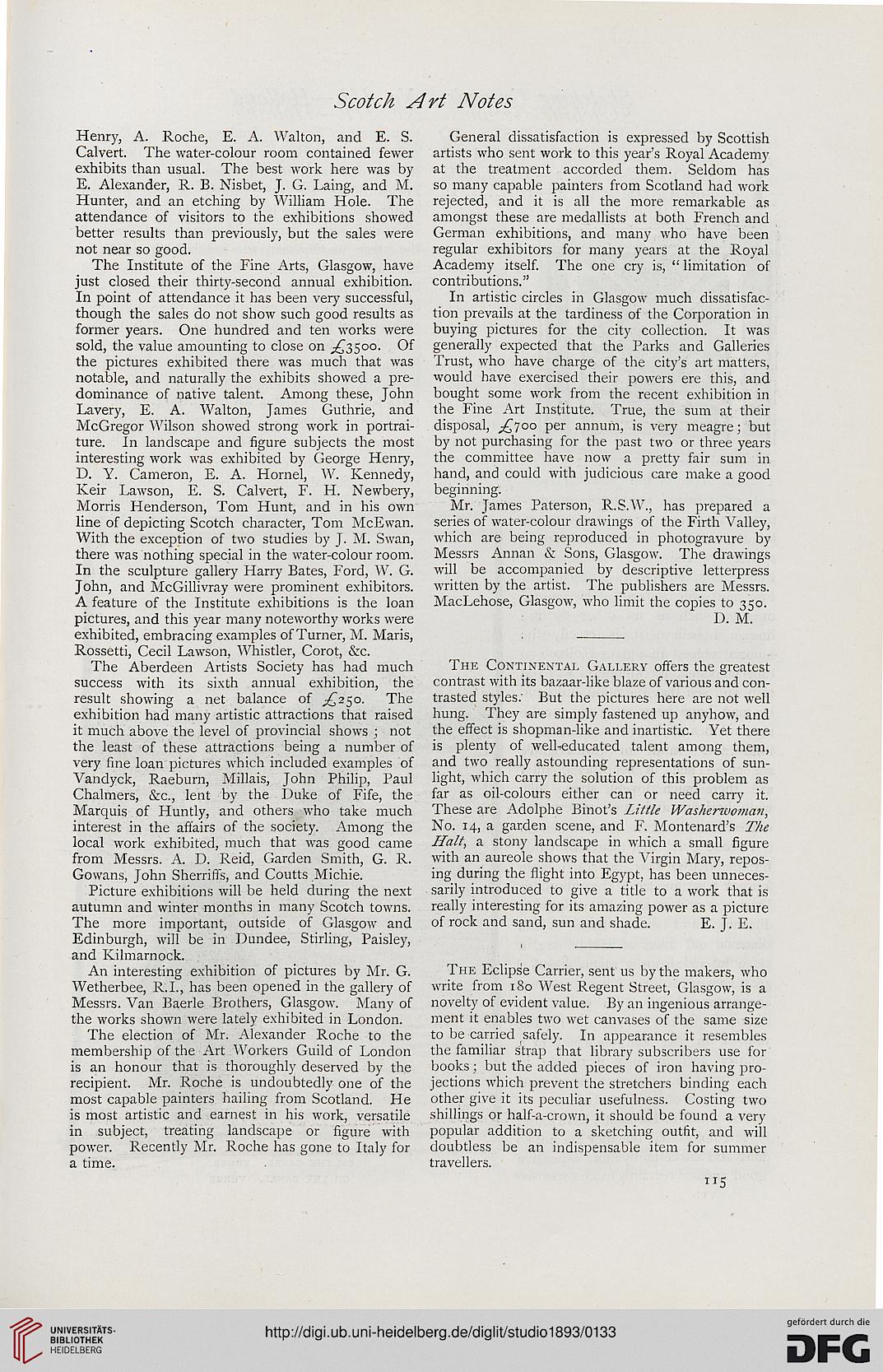 Henry, A. Roche, E. A. Walton, and E. S.
Calvert. The water-colour room contained fewer
exhibits than usual. The best work here was by
E. Alexander, R. B. Nisbet, J. G. Laing, and M.
Hunter, and an etching by William Hole. The
attendance of visitors to the exhibitions showed
better results than previously, but the sales were
not near so good.

The Institute of the Fine Arts, Glasgow, have
just closed their thirty-second annual exhibition.
In point of attendance it has been very successful,
though the sales do not show such good results as
former years. One hundred and ten works were
sold, the value amounting to close on ^3500. Of
the pictures exhibited there was much that was
notable, and naturally the exhibits showed a pre-
dominance of native talent. Among these, John
Lavery, E. A. Walton, James Guthrie, and
McGregor Wilson showed strong work in portrai-
ture. In landscape and figure subjects the most
interesting work was exhibited by George Henry,
D. Y. Cameron, E. A. Hornel, W. Kennedy,
Keir Lawson, E. S. Calvert, F. H. Newbery,
Morris Henderson, Tom Hunt, and in his own
line of depicting Scotch character, Tom McEwan.
With the exception of two studies by J. M. Swan,
there was nothing special in the water-colour room.
In the sculpture gallery Harry Bates, Ford, W. G.
John, and McGillivray were prominent exhibitors.
A feature of the Institute exhibitions is the loan
pictures, and this year many noteworthy works were
exhibited, embracing examples of Turner, M. Maris,
Rossetti, Cecil Lawson, Whistler, Corot, &c.

The Aberdeen Artists Society has had much
success with its sixth annual exhibition, the
result showing a net balance of ^250. The
exhibition had many artistic attractions that raised
it much above the level of provincial shows ; not
the least of these attractions being a number of
very fine loan pictures which included examples of
Vandyck, Raeburn, Millais, John Philip, Paul
Chalmers, &c, lent by the Duke of Fife, the
Marquis of Huntly, and others who take much
interest in the affairs of the society. Among the
local work exhibited, much that was good came
from Messrs. A. D. Reid, Garden Smith, G. R.
Gowans, John Sherriffs, and Coutts Michie.

Picture exhibitions will be held during the next
autumn and winter months in many Scotch towns.
The more important, outside of Glasgow and
Edinburgh, will be in Dundee, Stirling, Paisley,
and Kilmarnock.

An interesting exhibition of pictures by Mr. G.
Wetherbee, R.I., has been opened in the gallery of
Messrs. Van Baerle Brothers, Glasgow. Many of
the works shown were lately exhibited in London.

The election of Mr. Alexander Roche to the
membership of the Art Workers Guild of London
is an honour that is thoroughly deserved by the
recipient. Mr. Roche is undoubtedly one of the
most capable painters hailing from Scotland. He
is most artistic and earnest in his work, versatile
in subject, treating landscape or figure with
power. Recently Mr. Roche has gone to Italy for
a time.

General dissatisfaction is expressed by Scottish
artists who sent work to this year's Royal Academy
at the treatment accorded them. Seldom has
so many capable painters from Scotland had work
rejected, and it is all the more remarkable as
amongst these are medallists at both French and
German exhibitions, and many who have been
regular exhibitors for many years at the Royal
Academy itself. The one cry is, " limitation of
contributions."

In artistic circles in Glasgow much dissatisfac-
tion prevails at the tardiness of the Corporation in
buying pictures for the city collection. It was
generally expected that the Parks and Galleries
Trust, who have charge of the city's art matters,
would have exercised their powers ere this, and
bought some work from the recent exhibition in
the Fine Art Institute. True, the sum at their
disposal, £700 per annum, is very meagre; but
by not purchasing for the past two or three years
the committee have now a pretty fair sum in
hand, and could with judicious care make a good
beginning.

Mr. James Paterson, R.S.W., has prepared a
series of water-colour drawings of the Firth Valley,
which are being reproduced in photogravure by
Messrs Annan & Sons, Glasgow. The drawings
will be accompanied by descriptive letterpress
written by the artist. The publishers are Messrs.
MacLehose, Glasgow, who limit the copies to 350.

The Continental Gallery offers the greatest
contrast with its bazaar-like blaze of various and con-
trasted styles; But the pictures here are not well
hung. They are simply fastened up anyhow, and
the effect is shopman-like and inartistic. Yet there
is plenty of well-educated talent among them,
and two really astounding representations of sun-
light, which carry the solution of this problem as
far as oil-colours either can or need carry it.
These are Adolphe Binot's Little Washerwoman,
No. 14, a garden scene, and F. Montenard's The
Halt, a stony landscape in which a small figure
with an aureole shows that the Virgin Mary, repos-
ing during the flight into Egypt, has been unneces-
sarily introduced to give a title to a work that is
really interesting for its amazing power as a picture
of rock and sand, sun and shade. E. J. E.

The Eclipse Carrier, sent us by the makers, who
write from 180 West Regent Street, Glasgow, is a
novelty of evident value. By an ingenious arrange-
ment it enables two wet canvases of the same size
to be carried safely. In appearance it resembles
the familiar strap that library subscribers use for
books; but the added pieces of iron having pro-
jections which prevent the stretchers binding each
other give it its peculiar usefulness. Costing two
shillings or half-a-crown, it should be found a very
popular addition to a sketching outfit, and will
doubtless be an indispensable item for summer
travellers.