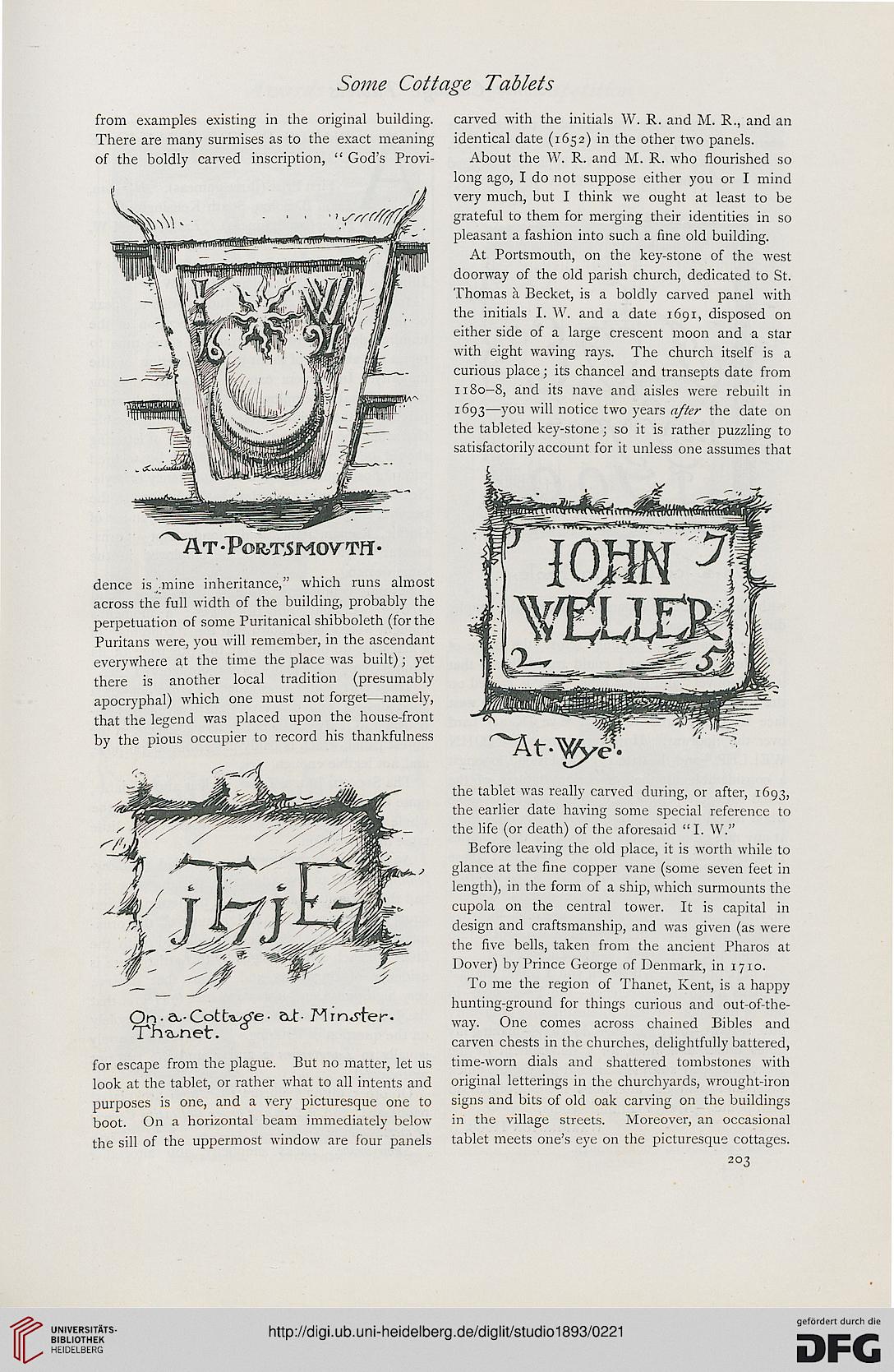 from examples existing in the original building.
There are many surmises as to the exact meaning
of the boldly carved inscription, " God's Provi-

dence is \mine inheritance," which runs almost
across the full width of the building, probably the
perpetuation of some Puritanical shibboleth (for the
Puritans were, you will remember, in the ascendant
everywhere at the time the place was built); yet
there is another local tradition (presumably
apocryphal) which one must not forget—namely,
that the legend was placed upon the house-front
by the pious occupier to record his thankfulness

for escape from the plague. But no matter, let us
look at the tablet, or rather what to all intents and
purposes is one, and a very picturesque one to
boot. On a horizontal beam immediately below
the sill of the uppermost window are four panels

About the W. R. and M. R. who flourished so
long ago, I do not suppose either you or I mind
very much, but I think we ought at least to be
grateful to them for merging their identities in so
pleasant a fashion into such a fine old building.

At Portsmouth, on the key-stone of the west
doorway of the old parish church, dedicated to St.
Thomas a Becket, is a boldly carved panel with
the initials I. W. and a date 1691, disposed on
either side of a large crescent moon and a star
with eight waving rays. The church itself is a
curious place; its chancel and transepts date from
1180-8, and its nave and aisles were rebuilt in
1693—you will notice two years after the date on
the tableted key-stone j so it is rather puzzling to
satisfactorily account for it unless one assumes that

the tablet was really carved during, or after, 1693,
the earlier date having some special reference to
the life (or death) of the aforesaid "I. \V."

Before leaving the old place, it is worth while to
glance at the fine copper vane (some seven feet in
length), in the form of a ship, which surmounts the
cupola on the central tower. It is capital in
design and craftsmanship, and was given (as were
the five bells, taken from the ancient Pharos at
Dover) by Prince George of Denmark, in 1710.

To me the region of Thanet, Kent, is a happy
hunting-ground for things curious and out-of-the-
way. One comes across chained Bibles and
carven chests in the churches, delightfully battered,
time-worn dials and shattered tombstones with
original letterings in the churchyards, wrought-iron
signs and bits of old oak carving on the buildings
in the village streets. Moreover, an occasional
tablet meets one's eye on the picturesque cottages.