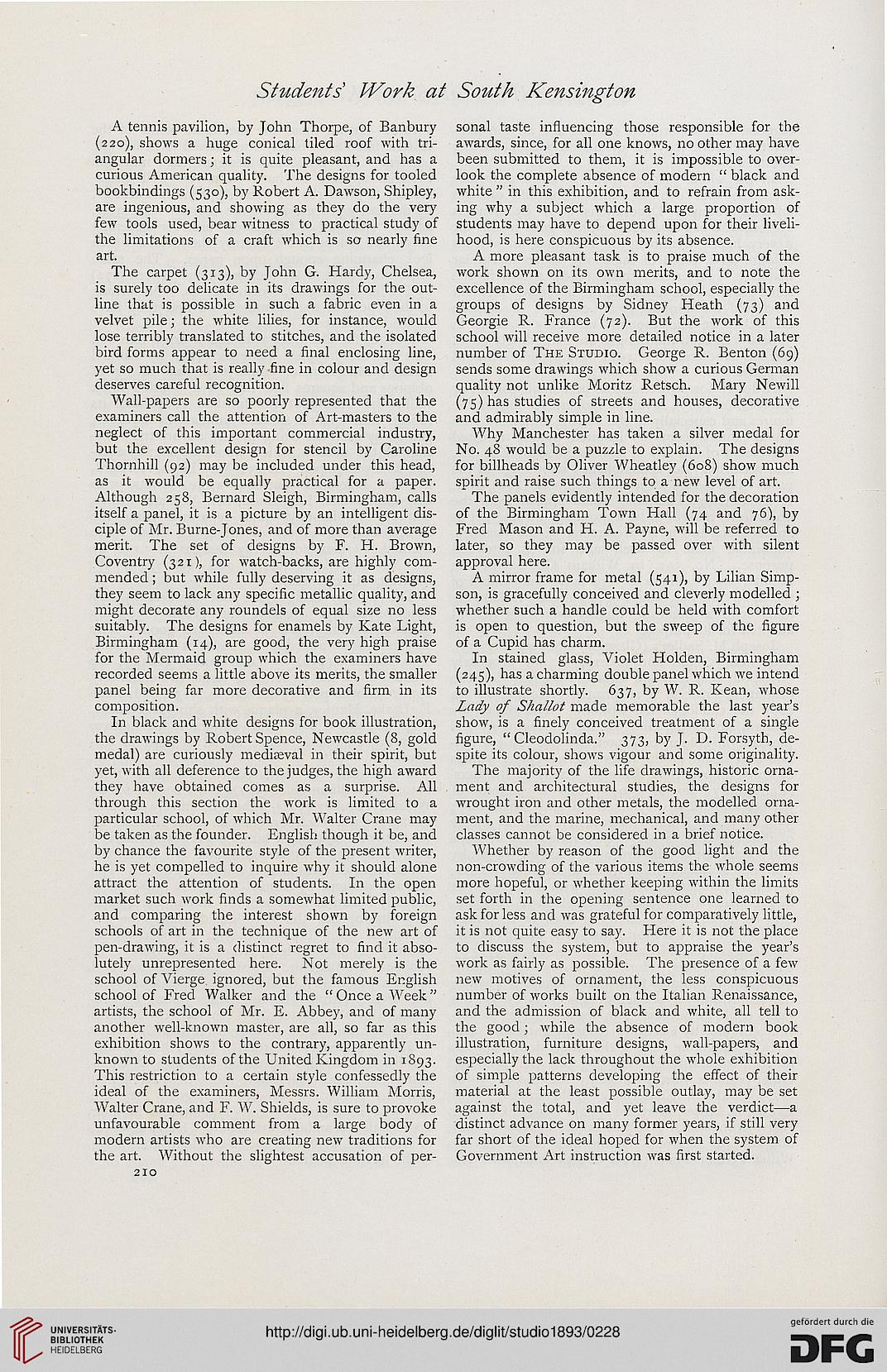 A tennis pavilion, by John Thorpe, of Banbury
(220), shows a huge conical tiled roof with tri-
angular dormers; it is quite pleasant, and has a
curious American quality. The designs for tooled
bookbindings (530), by Robert A. Dawson, Shipley,
are ingenious, and showing as they do the very
few tools used, bear witness to practical study of
the limitations of a craft which is so nearly fine
art.

The carpet (313), by John G. Hardy, Chelsea,
is surely too delicate in its drawings for the out-
line that is possible in such a fabric even in a
velvet pile; the white lilies, for instance, would
lose terribly translated to stitches, and the isolated
bird forms appear to need a final enclosing line,
yet so much that is really fine in colour and design
deserves careful recognition.

Wall-papers are so poorly represented that the
examiners call the attention of Art-masters to the
neglect of this important commercial industry,
but the excellent design for stencil by Caroline
Thornhill (92) may be included under this head,
as it would be equally practical for a paper.
Although 258, Bernard Sleigh, Birmingham, calls
itself a panel, it is a picture by an intelligent dis-
ciple of Mr. Burne-Jones, and of more than average
merit. The set of designs by F. H. Brown,
Coventry (321), for watch-backs, are highly com-
mended ; but while fully deserving it as designs,
they seem to lack any specific metallic quality, and
might decorate any roundels of equal size no less
suitably. The designs for enamels by Kate Light,
Birmingham (14), are good, the very high praise
for the Mermaid group which the examiners have
recorded seems a little above its merits, the smaller
panel being far more decorative and firm in its
composition.

In black and white designs for book illustration,
the drawings by Robert Spence, Newcastle (8, gold
medal) are curiously mediaeval in their spirit, but
yet, with all deference to the judges, the high award
they have obtained comes as a surprise. All
through this section the work is limited to a
particular school, of which Mr. Walter Crane may
be taken as the founder. English though it be, and
by chance the favourite style of the present writer,
he is yet compelled to inquire why it should alone
attract the attention of students. In the open
market such work finds a somewhat limited public,
and comparing the interest shown by foreign
schools of art in the technique of the new art of
pen-drawing, it is a distinct regret to find it abso-
lutely unrepresented here. Not merely is the
school of Vierge ignored, but the famous English
school of Fred Walker and the " Once a Week"
artists, the school of Mr. E. Abbey, and of many
another well-known master, are all, so far as this
exhibition shows to the contrary, apparently un-
known to students of the United Kingdom in 1893.
This restriction to a certain style confessedly the
ideal of the examiners, Messrs. William Morris,
Walter Crane, and F. W. Shields, is sure to provoke
unfavourable comment from a large body of
modern artists who are creating new traditions for
the art. Without the slightest accusation of per-
210

sonal taste influencing those responsible for the
awards, since, for all one knows, no other may have
been submitted to them, it is impossible to over-
look the complete absence of modern " black and
white " in this exhibition, and to refrain from ask-
ing why a subject which a large proportion of
students may have to depend upon for their liveli-
hood, is here conspicuous by its absence.

A more pleasant task is to praise much of the
work shown on its own merits, and to note the
excellence of the Birmingham school, especially the
groups of designs by Sidney Heath (73) and
Georgie R. France (72). But the work of this
school will receive more detailed notice in a later
number of The Studio. George R. Benton (69)
sends some drawings which show a curious German
quality not unlike Moritz Retsch. Mary Newill
(75) has studies of streets and houses, decorative
and admirably simple in line.

Why Manchester has taken a silver medal for
No. 48 would be a puzzle to explain. The designs
for billheads by Oliver Wheatley (608) show much
spirit and raise such things to a new level of art.

The panels evidently intended for the decoration
of the Birmingham Town Hall (74 and 76), by
Fred Mason and H. A. Payne, will be referred to
later, so they may be passed over with silent
approval here.

A mirror frame for metal (541), by Lilian Simp-
son, is gracefully conceived and cleverly modelled ;
whether such a handle could be held with comfort
is open to question, but the sweep of the figure
of a Cupid has charm.

In stained glass, Violet Holden, Birmingham
(245), has a charming double panel which we intend
to illustrate shortly. 637, by W. R. Kean, whose
Lady of Shallot made memorable the last year's
show, is a finely conceived treatment of a single
figure, " Cleodolinda." 373, by J. D. Forsyth, de-
spite its colour, shows vigour and some originality.

The majority of the life drawings, historic orna-
ment and architectural studies, the designs for
wrought iron and other metals, the modelled orna-
ment, and the marine, mechanical, and many other
classes cannot be considered in a brief notice.

Whether by reason of the good light and the
non-crowding of the various items the whole seems
more hopeful, or whether keeping within the limits
set forth in the opening sentence one learned to
ask for less and was grateful for comparatively little,
it is not quite easy to say. Here it is not the place
to discuss the system, but to appraise the year's
work as fairly as possible. The presence of a few
new motives of ornament, the less conspicuous
number of works built on the Italian Renaissance,
and the admission of black and white, all tell to
the good; while the absence of modern book
illustration, furniture designs, wall-papers, and
especially the lack throughout the whole exhibition
of simple patterns developing the effect of their
material at the least possible outlay, may be set
against the total, and yet leave the verdict—a
distinct advance on many former years, if still very
far short of the ideal hoped for when the system of
Government Art instruction was first started.