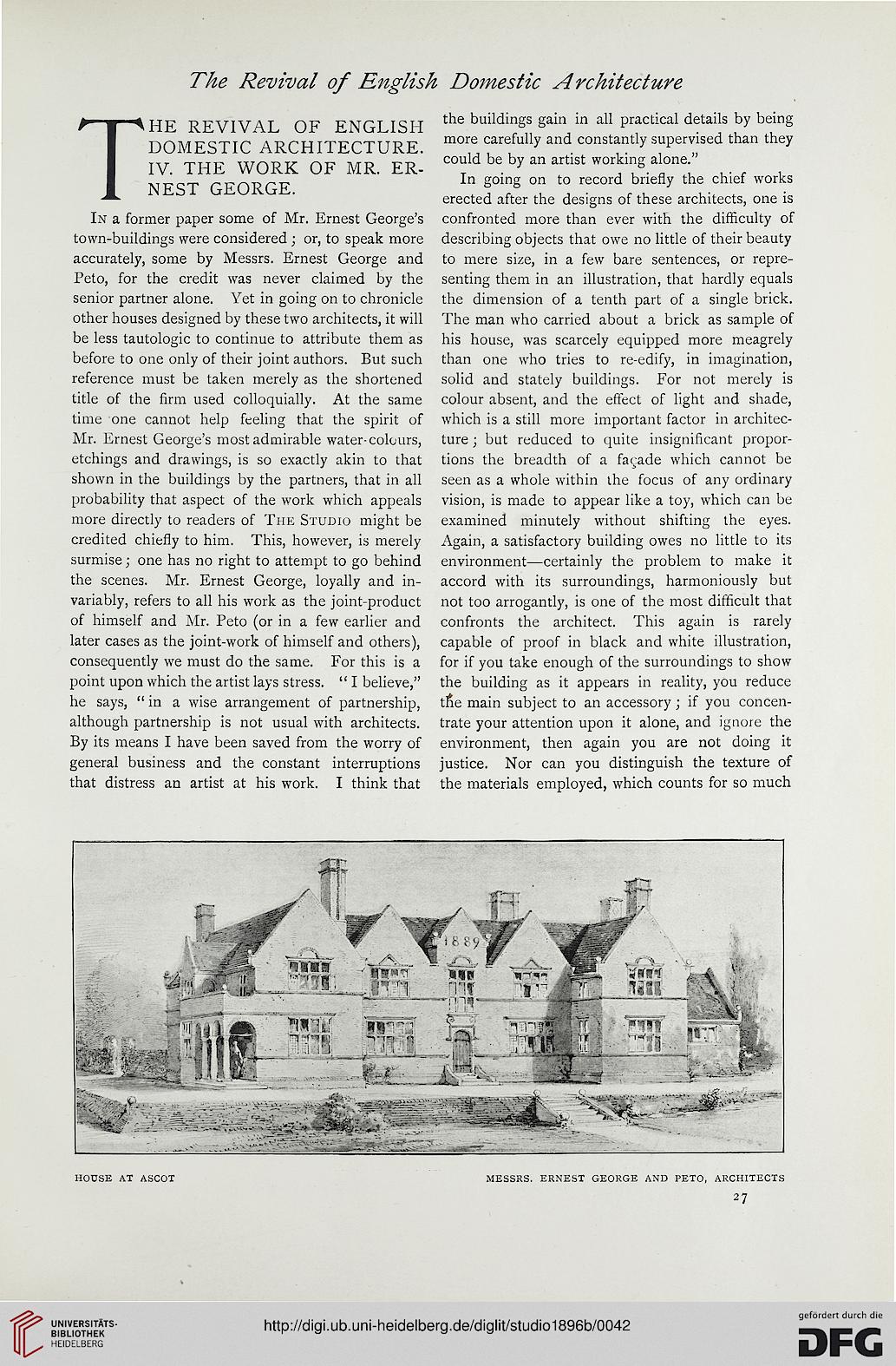 Information about OCR text
The Revival of English Domestic Architecture

DOMESTIC ARCHITECTURE more carefully and constantly supervised than they

IV. THE WORK OF MR. ER* could be by an artist working alone/'

erected after the designs of these architects, one is

In a former paper some of Mr. Ernest George's confronted more than ever with the difficulty of

town-buildings were considered ; or, to speak more describing objects that owe no little of their beauty

accurately, some by Messrs. Ernest George and to mere size, in a few bare sentences, or repre-

Peto, for the credit was never claimed by the senting them in an illustration, that hardly equals

senior partner alone. Yet in going on to chronicle the dimension of a tenth part of a single brick,

other houses designed by these two architects, it will The man who carried about a brick as sample of

be less tautologic to continue to attribute them as his house, was scarcely equipped more meagrely

before to one only of their joint authors. But such than one who tries to re-edify, in imagination,

reference must be taken merely as the shortened solid and stately buildings. For not merely is

title of the firm used colloquially. At the same colour absent, and the effect of light and shade,

Mr. Ernest George's most admirable water-colours, ture ; but reduced to quite insignificant propor-

etchings and drawings, is so exactly akin to that tions the breadth of a farade which cannot be

shown in the buildings by the partners, that in all seen as a whole within the focus of any ordinary

probability that aspect of the work which appeals vision, is made to appear like a toy, which can be

more directly to readers of The Studio might be examined minutely without shifting the eyes,

credited chiefly to him. This, however, is merely Again, a satisfactory building owes no little to its

surmise; one has no right to attempt to go behind environment—certainly the problem to make it

the scenes. Mr. Ernest George, loyally and in- accord with its surroundings, harmoniously but

variably, refers to all his work as the joint-product not too arrogantly, is one of the most difficult that

of himself and Mr. Peto (or in a few earlier and confronts the architect. This again is rarely

later cases as the joint-work of himself and others), capable of proof in black and white illustration,

consequently we must do the same. For this is a for if you take enough of the surroundings to show

point upon which the artist lays stress. " I believe," the building as it appears in reality, you reduce

he says, " in a wise arrangement of partnership, tne main subject to an accessory ; if you concen-

although partnership is not usual with architects, trate your attention upon it alone, and ignore the

By its means I have been saved from the worry of environment, then again you are not doing it

general business and the constant interruptions justice. Nor can you distinguish the texture of

that distress an artist at his work. I think that the materials employed, which counts for so much