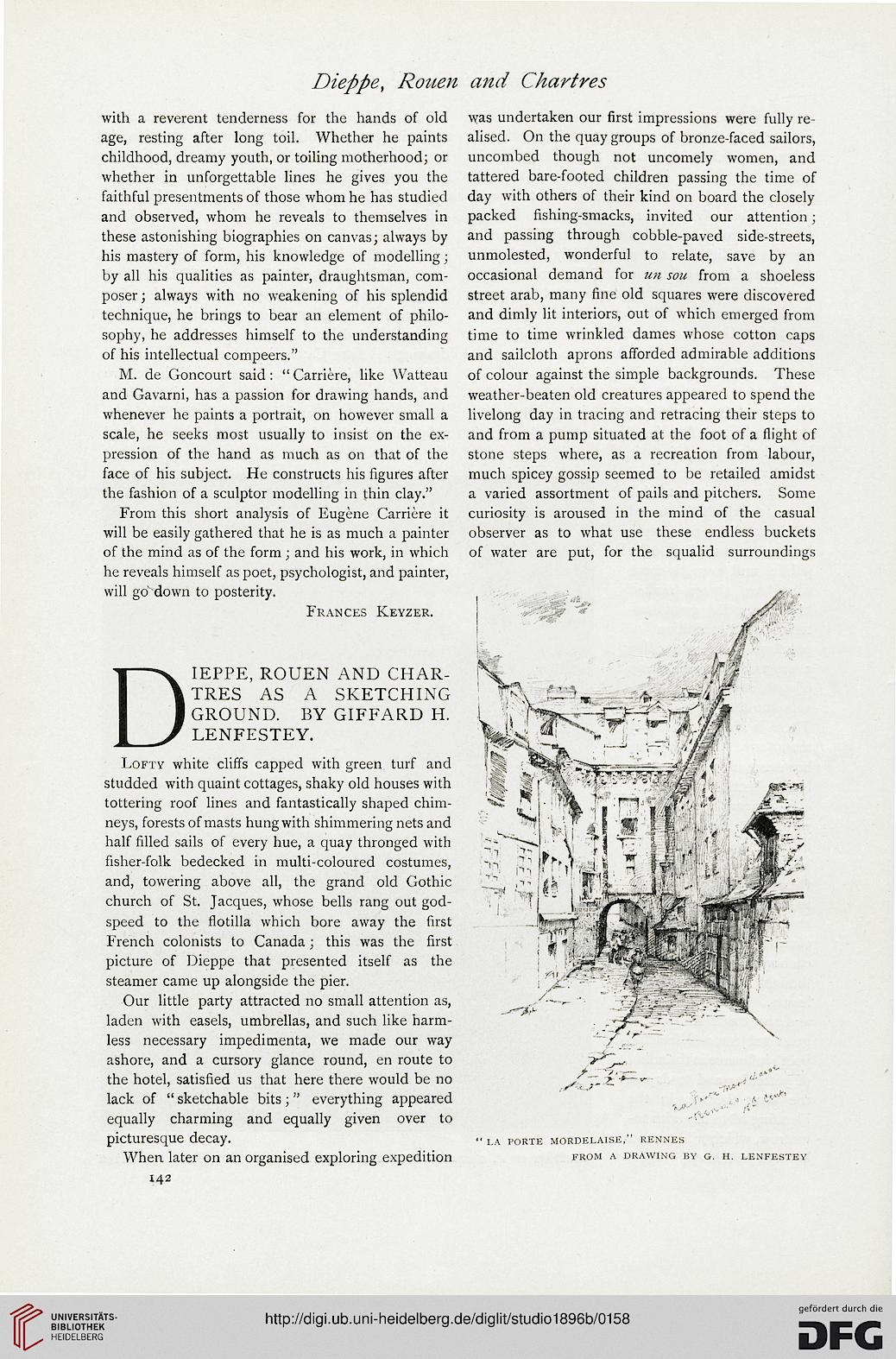 with a reverent tenderness for the hands of old
age, resting after long toil. Whether he paints
childhood, dreamy youth, or toiling motherhood; or
whether in unforgettable lines he gives you the
faithful presentments of those whom he has studied
and observed, whom he reveals to themselves in
these astonishing biographies on canvas; always by
his mastery of form, his knowledge of modelling;
by all his qualities as painter, draughtsman, com-
poser ; always with no weakening of his splendid
technique, he brings to bear an element of philo-
sophy, he addresses himself to the understanding
of his intellectual compeers."

M. de Goncourt said : " Carriere, like Watteau
and Gavarni, has a passion for drawing hands, and
whenever he paints a portrait, on however small a
scale, he seeks most usually to insist on the ex-
pression of the hand as much as on that of the
face of his subject. He constructs his figures after
the fashion of a sculptor modelling in thin clay."

From this short analysis of Eugene Carriere it
will be easily gathered that he is as much a painter
of the mind as of the form ; and his work, in which
he reveals himself as poet, psychologist, and painter,
will go down to posterity.

DIEPPE, ROUEN AND CHAR-
TRES AS A SKETCHING
GROUND. BY GIFFARD H.
LENFESTEY.

Eofty white cliffs capped with green turf and
studded with quaint cottages, shaky old houses with
tottering roof lines and fantastically shaped chim-
neys, forests of masts hung with shimmering nets and
half filled sails of every hue, a quay thronged with
fisher-folk bedecked in multi-coloured costumes,
and, towering above all, the grand old Gothic
church of St. Jacques, whose bells rang out god-
speed to the flotilla which bore away the first
French colonists to Canada; this was the first
picture of Dieppe that presented itself as the
steamer came up alongside the pier.

Our little party attracted no small attention as,
laden with easels, umbrellas, and such like harm-
less necessary impedimenta, we made our way
ashore, and a cursory glance round, en route to
the hotel, satisfied us that here there would be no
lack of " sketchable bits ; " everything appeared
equally charming and equally given over to
picturesque decay.

When later on an organised exploring expedition
142

was undertaken our first impressions were fully re-
alised. On the quay groups of bronze-faced sailors,
uncombed though not uncomely women, and
tattered bare-footed children passing the time of
day with others of their kind on board the closely
packed fishing-smacks, invited our attention;
and passing through cobble-paved side-streets,
unmolested, wonderful to relate, save by an
occasional demand for un sou from a shoeless
street arab, many fine old squares were discovered
and dimly lit interiors, out of which emerged from
time to time wrinkled dames whose cotton caps
and sailcloth aprons afforded admirable additions
of colour against the simple backgrounds. These
weather-beaten old creatures appeared to spend the
livelong day in tracing and retracing their steps to
and from a pump situated at the foot of a flight of
stone steps where, as a recreation from labour,
much spicey gossip seemed to be retailed amidst
a varied assortment of pails and pitchers. Some
curiosity is aroused in the mind of the casual
observer as to what use these endless buckets
of water are put, for the squalid surroundings

FROM A DRAWING BY G. H. LENFESTEY