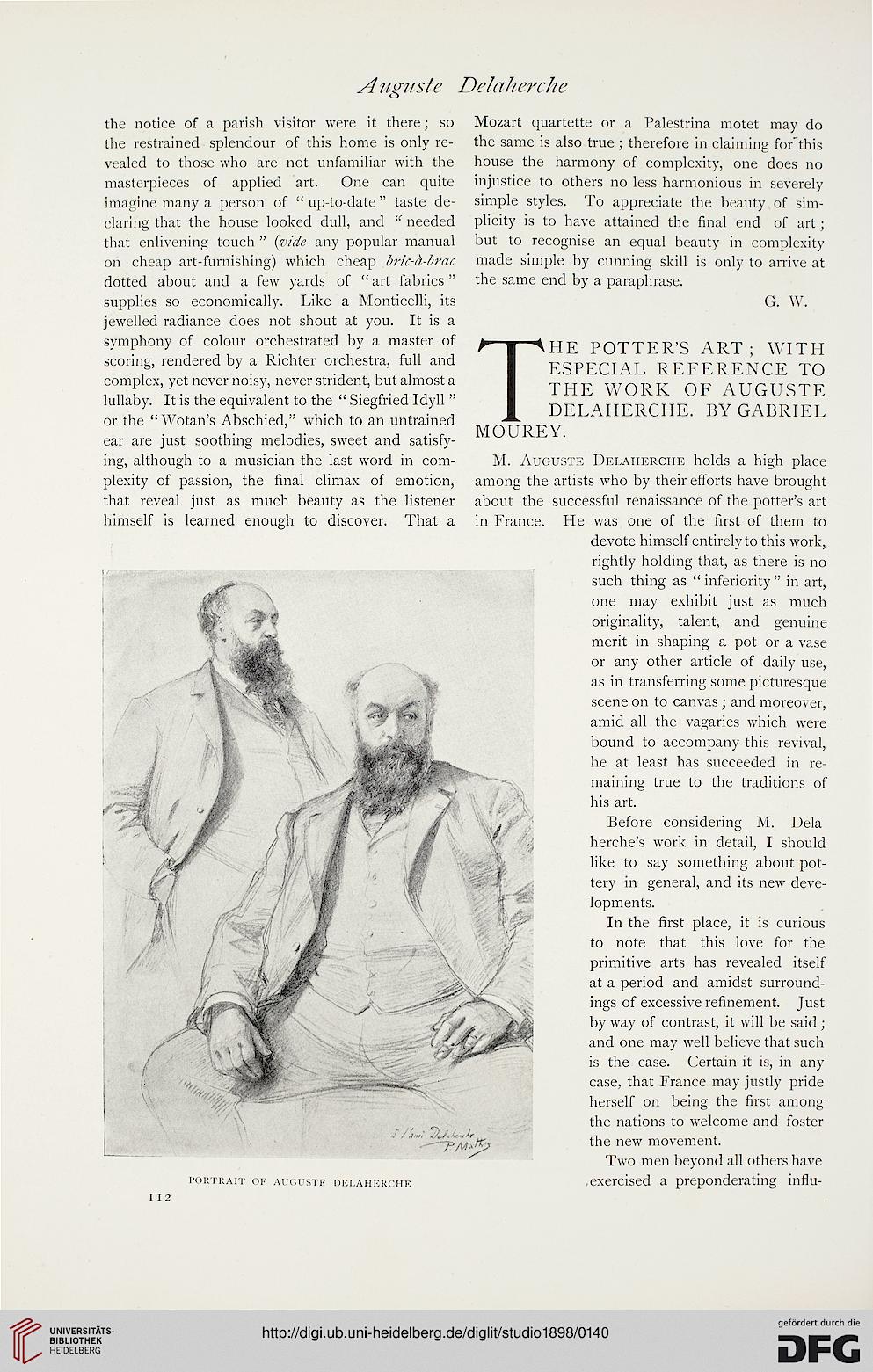 the notice of a parish visitor were it there; so Mozart quartette or a Palestrina motet may do

the restrained splendour of this home is only re- the same is also true ; therefore in claiming for'this

vealed to those who are not unfamiliar with the house the harmony of complexity, one does no

masterpieces of applied art. One can quite injustice to others no less harmonious in severely

imagine many a person of "up-to-date" taste de- simple styles. To appreciate the beauty of sim-

claring that the house looked dull, and " needed plicity is to have attained the final end of art ;

dotted about and a few yards of " art fabrics " the same end by a paraphrase,
supplies so economically. Like a Monticelli, its G. W.

jewelled radiance does not shout at you. It is a

lullaby. It is the equivalent to the " Siegfried Idyll
or the "Wotan's Abschied," which to an untrained
ear are just soothing melodies, sweet and satisfy-
ing, although to a musician the last word in com- M. Auguste Delaherche holds a high place
plexity of passion, the final climax of emotion, among the artists who by their efforts have brought
that reveal just as much beauty as the listener about the successful renaissance of the potter's art
himself is learned enough to discover. That a in France. He was one of the first of them to

devote himself entirely to this work,
rightly holding that, as there is no
such thing as " inferiority " in art,
one may exhibit just as much
originality, talent, and genuine
merit in shaping a pot or a vase
or any other article of daily use,
as in transferring some picturesque
scene on to canvas ; and moreover,
amid all the vagaries which were
bound to accompany this revival,
he at least has succeeded in re-
maining true to the traditions of
his art.

Before considering M. Dela
V herche's work in detail, I should

like to say something about pot-
tery in general, and its new deve-
lopments.

In the first place, it is curious
to note that this love for the
primitive arts has revealed itself
at a period and amidst surround-
ings of excessive refinement. Just
by way of contrast, it will be said ;
and one may well believe that such
is the case. Certain it is, in any
case, that France may justly pride
herself on being the first among
the nations to welcome and foster
the new movement.

Two men beyond all others have
portrait of auguste delaherche .exercised a preponderating influ-