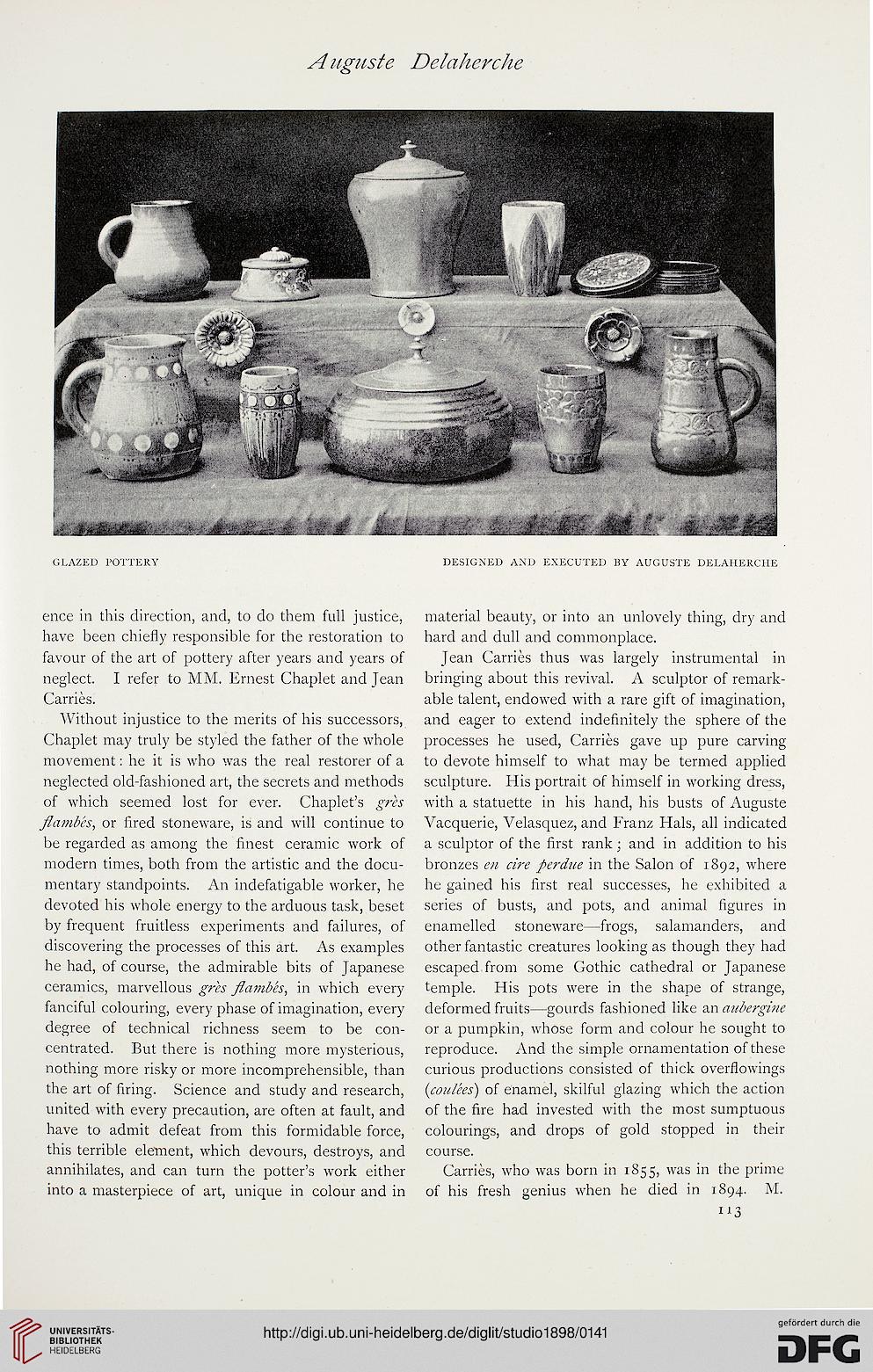 ence in this direction, and, to do them full justice,
have been chiefly responsible for the restoration to
favour of the art of pottery after years and years of
neglect. I refer to MM. Ernest Chaplet and Jean
Carries.

Without injustice to the merits of his successors,
Chaplet may truly be styled the father of the whole
movement: he it is who was the real restorer of a
neglected old-fashioned art, the secrets and methods
of which seemed lost for ever. Chaplet's gres
flambes, or fired stoneware, is and will continue to
be regarded as among the finest ceramic work of
modern times, both from the artistic and the docu-
mentary standpoints. An indefatigable worker, he
devoted his whole energy to the arduous task, beset
by frequent fruitless experiments and failures, of
discovering the processes of this art. As examples
he had, of course, the admirable bits of Japanese
ceramics, marvellous gres flambes, in which every
fanciful colouring, every phase of imagination, every
degree of technical richness seem to be con-
centrated. But there is nothing more mysterious,
nothing more risky or more incomprehensible, than
the art of firing. Science and study and research,
united with every precaution, are often at fault, and
have to admit defeat from this formidable force,
this terrible element, which devours, destroys, and
annihilates, and can turn the potter's work either
into a masterpiece of art, unique in colour and in

material beauty, or into an unlovely thing, dry and
hard and dull and commonplace.

Jean Carries thus was largely instrumental in
bringing about this revival. A sculptor of remark-
able talent, endowed with a rare gift of imagination,
and eager to extend indefinitely the sphere of the
processes he used, Carries gave up pure carving
to devote himself to what may be termed applied
sculpture. His portrait of himself in working dress,
with a statuette in his hand, his busts of Auguste
Vacquerie, Velasquez, and Franz Hals, all indicated
a sculptor of the first rank; and in addition to his
bronzes en cire perdue in the Salon of 1892, where
he gained his first real successes, he exhibited a
series of busts, and pots, and animal figures in
enamelled stoneware—frogs, salamanders, and
other fantastic creatures looking as though they had
escaped from some Gothic cathedral or Japanese
temple. His pots were in the shape of strange,
deformed fruits—gourds fashioned like an aubergine
or a pumpkin, whose form and colour he sought to
reproduce. And the simple ornamentation of these
curious productions consisted of thick overflowings
{coulees) of enamel, skilful glazing which the action
of the fire had invested with the most sumptuous
colourings, and drops of gold stopped in their
course.