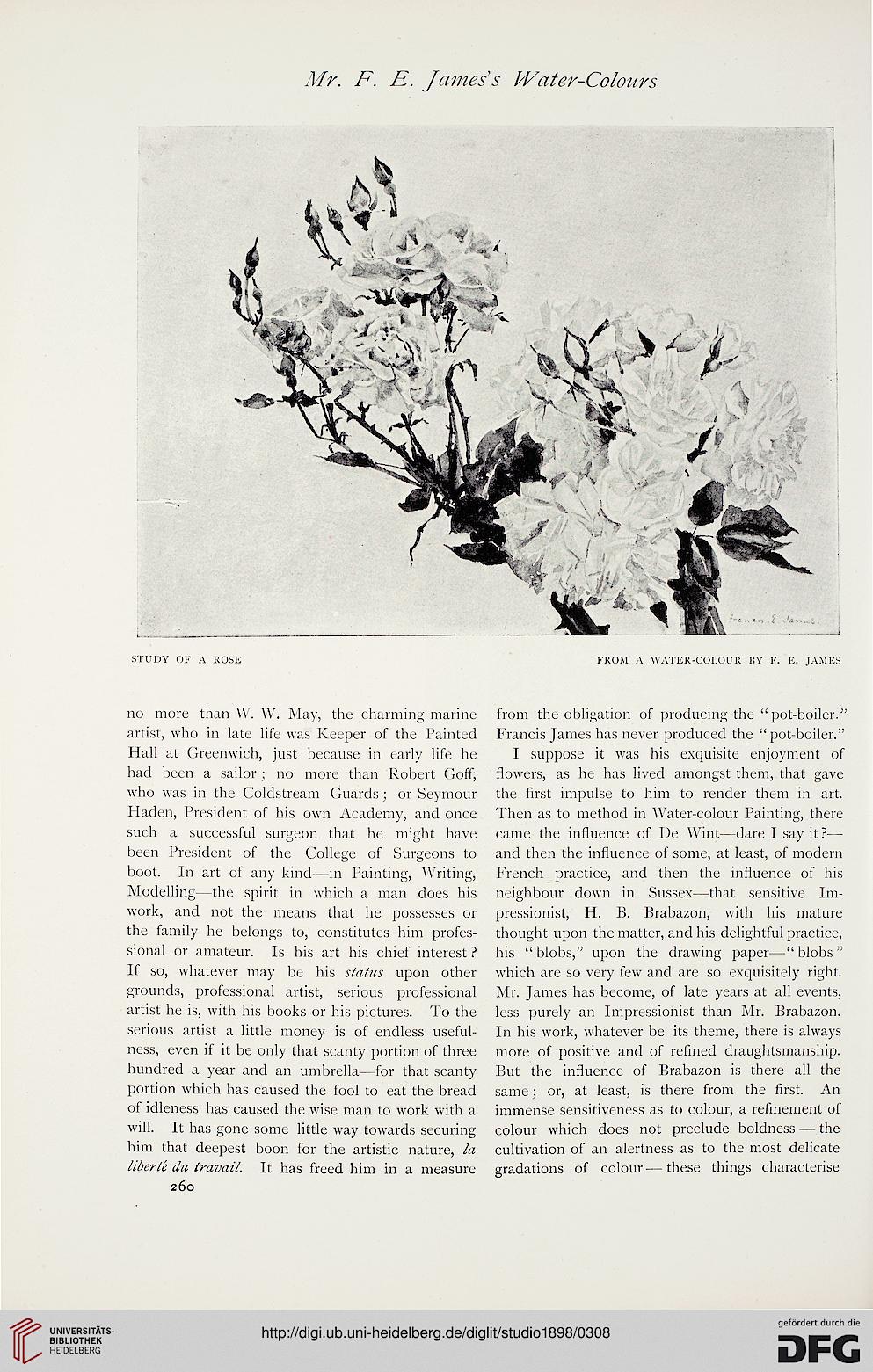 STUDY OF A ROSE FROM A WATER-COLOUR BY F. E. JAMES

no more than W. W. May, the charming marine from the obligation of producing the "pot-boiler."

artist, who in late life was Keeper of the Painted Francis James has never produced the "pot-boiler."
Hall at Greenwich, just because in early life he I suppose it was his exquisite enjoyment of

had been a sailor ; no more than Robert Goff, flowers, as he has lived amongst them, that gave

who was in the Coldstream Guards; or Seymour the first impulse to him to render them in art.

Haden, President of his own Academy, and once Then as to method in Water-colour Painting, there

such a successful surgeon that he might have came the influence of De Wint—dare I say it?—

been President of the College of Surgeons to and then the influence of some, at least, of modern

boot. In art of any kind—in Painting, Writing, French practice, and then the influence of his

work, and not the means that he possesses or pressionist, H. B. Brabazon, with his mature

the family he belongs to, constitutes him profes- thought upon the matter, and his delightful practice,

sional or amateur. Is his art his chief interest? his "blobs," upon the drawing paper—"blobs"

If so, whatever may be his status upon other which are so very few and are so exquisitely right,

artist he is, with his books or his pictures. To the less purely an Impressionist than Mr. Brabazon.

serious artist a little money is of endless useful- In his work, whatever be its theme, there is always

ness, even if it be only that scanty portion of three more of positive and of refined draughtsmanship,

portion which has caused the fool to eat the bread same; or, at least, is there from the first. An

of idleness has caused the wise man to work with a immense sensitiveness as to colour, a refinement of

will. It has gone some little way towards securing colour which does not preclude boldness — the

him that deepest boon for the artistic nature, la cultivation of an alertness as to the most delicate

liberie da travail. It has freed him in a measure gradations of colour—these things characterise
260