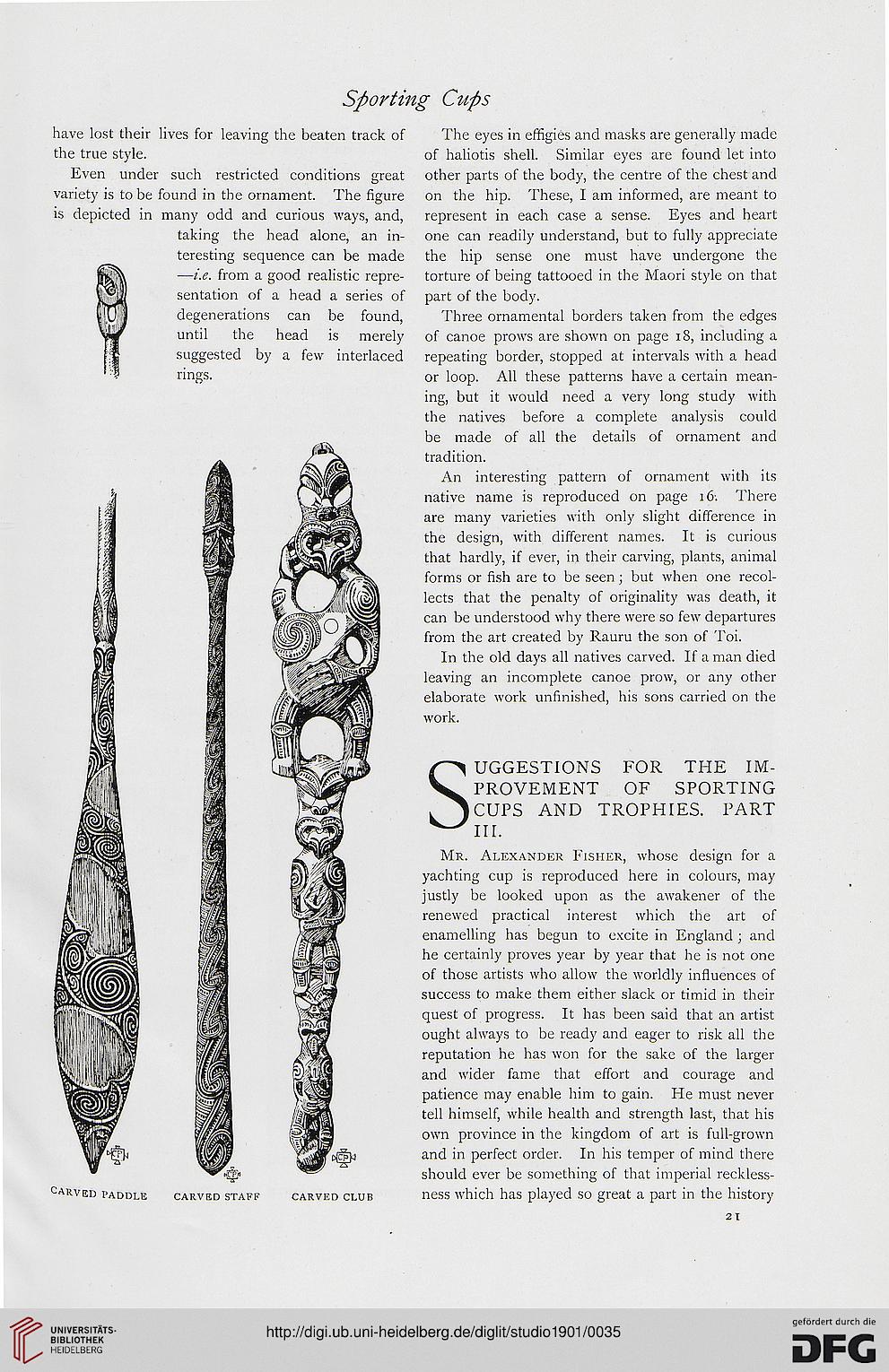 have lost their lives for leaving the beaten track of The eyes in effigies and masks are generally made
the true style. of haliotis shell. Similar eyes are found let into

Even under such restricted conditions great other parts of the body, the centre of the chest and
variety is to be found in the ornament. The figure on the hip. These, I am informed, are meant to
is depicted in many odd and curious ways, and, represent in each case a sense. Eyes and heart
taking the head alone, an in- one can readily understand, but to fully appreciate
teresting sequence can be made the hip sense one must have undergone the
—i.e. from a good realistic repre- torture of being tattooed in the Maori style on that
sentation of a head a series of part of the body.

degenerations can be found, Three ornamental borders taken from the edges
until the head is merely of canoe prows are shown on page 18, including a
suggested by a few interlaced repeating border, stopped at intervals with a head
rings. or loop. All these patterns have a certain mean-

ing, but it would need a very long study with
the natives before a complete analysis could
be made of all the details of ornament and
tradition.

An interesting pattern of ornament with its
native name is reproduced on page 16. There
are many varieties with only slight difference in
the design, with different names. It is curious
that hardly, if ever, in their carving, plants, animal
forms or fish are to be seen; but when one recol-
lects that the penalty of originality was death, it
can be understood why there were so few departures
from the art created by Rauru the son of Toi.

In the old days all natives carved. If a man died
leaving an incomplete canoe prow, or any other
elaborate work unfinished, his sons carried on the
work.

UGGESTIONS FOR THE IM-
PROVEMENT OF SPORTING
CUPS AND TROPHIES. PART
III.

Mr. Alexander Fisher, whose design for a
yachting cup is reproduced here in colours, may
justly be looked upon as the awakener of the
renewed practical interest which the art of
enamelling has begun to excite in England ; and
he certainly proves year by year that he is not one
of those artists who allow the worldly influences of
success to make them either slack or timid in their
quest of progress. It has been said that an artist
ought always to be ready and eager to risk all the
reputation he has won for the sake of the larger
and wider fame that effort and courage and
patience may enable him to gain. He must never
tell himself, while health and strength last, that his
own province in the kingdom of art is full-grown
flUF ISST'^Et'"1 anc^ *n Perfect order. In his temper of mind there