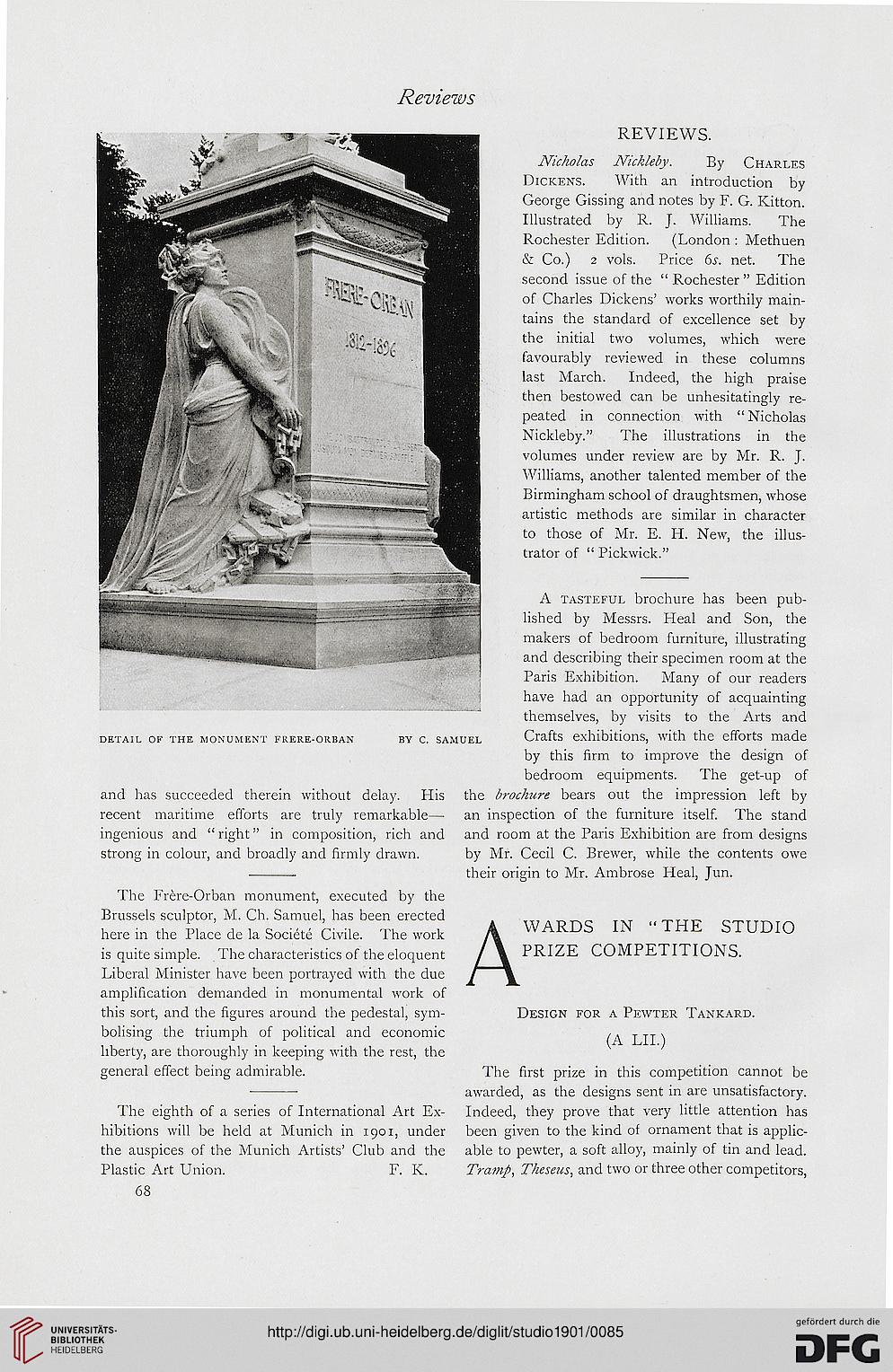 Nicholas Nickleby. By Charles
Dickens. With an introduction by
George Gissing and notes by F. G. Kitton.
Illustrated by R. J. Williams. The
Rochester Edition. (London : Methuen
& Co.) 2 vols. Price 6s. net. The
second issue of the " Rochester " Edition
of Charles Dickens' works worthily main-
tains the standard of excellence set by
the initial two volumes, which were
favourably reviewed in these columns
last March. Indeed, the high praise
then bestowed can be unhesitatingly re-
peated in connection with "Nicholas
Nickleby." The illustrations in the
volumes under review are by Mr. R. J.
Williams, another talented member of the
Birmingham school of draughtsmen, whose
artistic methods are similar in character
to those of Mr. E. H. New, the illus-
trator of " Pickwick."

DETAIL OF THE MONUMENT FRERE-ORBAN BY C. SAMUEL

A tasteful brochure has been pub-
lished by Messrs. Heal and Son, the
makers of bedroom furniture, illustrating
and describing their specimen room at the
Paris Exhibition. Many of our readers
have had an opportunity of acquainting
themselves, by visits to the Arts and
Crafts exhibitions, with the efforts made
by this firm to improve the design of
bedroom equipments. The get-up of
and has succeeded therein without delay. His the brochure bears out the impression left by
recent maritime efforts are truly remarkable— an inspection of the furniture itself. The stand
ingenious and " right" in composition, rich and and room at the Paris Exhibition are from designs
strong in colour, and broadly and firmly drawn. by Mr. Cecil C. Brewer, while the contents owe

The Frere-Orban monument, executed by the
Brussels sculptor, M. Ch. Samuel, has been erected „„„
here in the Race de la Societe Civile. The work A WARDS IN "THE STUDIO

is quite simple. The characteristics of the eloquent /\ PRIZE COMPETITIONS.
Liberal Minister have been portrayed with the due
amplification demanded in monumental work of

this sort, and the figures around the pedestal, sym- Design for a Pewter Tankard.
bolising the triumph of political and economic
liberty, are thoroughly in keeping with the rest, the
general effect being admirable. The first prize in this competition cannot be
- awarded, as the designs sent in are unsatisfactory.

The eighth of a series of International Art Ex- Indeed, they prove that very little attention has

hibitions will be held at Munich in 1901, under been given to the kind of ornament that is applic-

the auspices of the Munich Artists' Club and the able to pewter, a soft alloy, mainly of tin and lead.