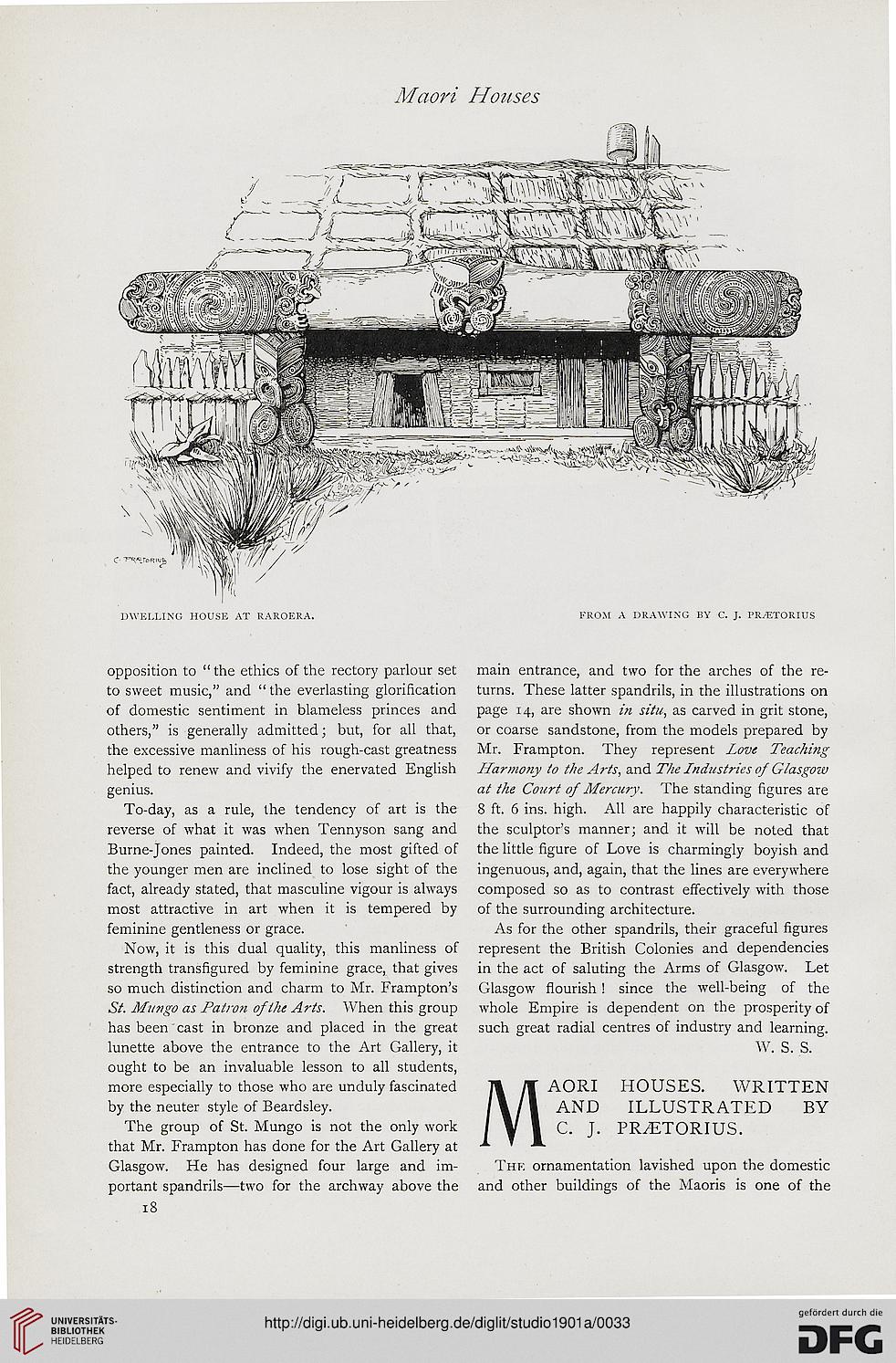 DWELLING HOUSE AT RAROERA. FROM A DRAWING BY C. J. I'R/ETORIUS

opposition to " the ethics of the rectory parlour set
to sweet music," and "the everlasting glorification
of domestic sentiment in blameless princes and
others," is generally admitted; but, for all that,
the excessive manliness of his rough-cast greatness
helped to renew and vivify the enervated English
genius.

To-day, as a rule, the tendency of art is the
reverse of what it was when Tennyson sang and
Burne-Jones painted. Indeed, the most gifted of
the younger men are inclined to lose sight of the
fact, already stated, that masculine vigour is always
most attractive in art when it is tempered by
feminine gentleness or grace.

Now, it is this dual quality, this manliness of
strength transfigured by feminine grace, that gives
so much distinction and charm to Mr. Frampton's
St. Mungo as Patron of the Arts. When this group
has been "cast in bronze and placed in the great
lunette above the entrance to the Art Gallery, it
ought to be an invaluable lesson to all students,
more especially to those who are unduly fascinated
by the neuter style of Beardsley.

The group of St. Mungo is not the only work
that Mr. Frampton has done for the Art Gallery at
Glasgow. He has designed four large and im-
portant spandrils—two for the archway above the
18

main entrance, and two for the arches of the re-
turns. These latter spandrils, in the illustrations on
page 14, are shown in situ, as carved in grit stone,
or coarse sandstone, from the models prepared by
Mr. Frampton. They represent Love Teaching
Harmony to the Arts, and The Industries of Glasgow
at the Court of Mercury. The standing figures are
8 ft. 6 ins. high. All are happily characteristic of
the sculptor's manner; and it will be noted that
the little figure of Love is charmingly boyish and
ingenuous, and, again, that the lines are everywhere
composed so as to contrast effectively with those
of the surrounding architecture.

As for the other spandrils, their graceful figures
represent the British Colonies and dependencies
in the act of saluting the Arms of Glasgow. Let
Glasgow flourish ! since the well-being of the
whole Empire is dependent on the prosperity of
such great radial centres of industry and learning.

Thf. ornamentation lavished upon the domestic
and other buildings of the Maoris is one of the