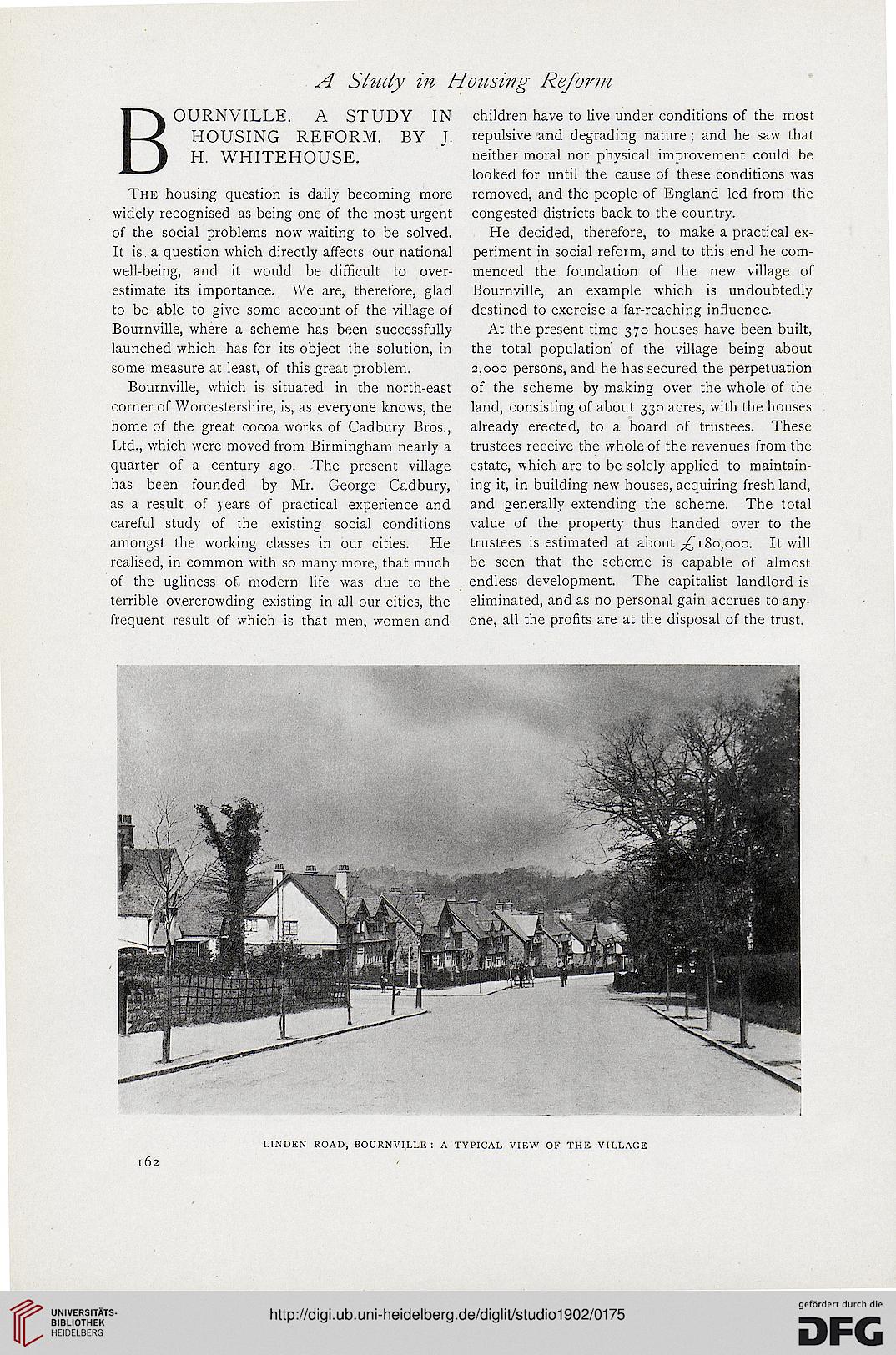 Information about OCR text
A Study in Housing Reform

OURNVILLE. A STUDY IN
HOUSING REFORM. BY J.
H. WHITEHOUSE.

The housing question is daily becoming more
widely recognised as being one of the most urgent
of the social problems now waiting to be solved.
It is . a question which directly affects our national
well-being, and it would be difficult to over-
estimate its importance. We are, therefore, glad
to be able to give some account of the village of
Bournville, where a scheme has been successfully
launched which has for its object the solution, in
some measure at least, of this great problem.

Bournville, which is situated in the north-east
corner of Worcestershire, is, as everyone knows, the
home of the great cocoa works of Cadbury Bros.,
Ltd., which were moved from Birmingham nearly a
quarter of a century ago. The present village
has been founded by Mr. George Cadbury,
as a result of 3 ears of practical experience and
careful study of the existing social conditions
amongst the working classes in our cities. He
realised, in common with so many more, that much
of the ugliness of modern life was due to the
terrible overcrowding existing in all our cities, the
frequent result of which is that men, women and

children have to live under conditions of the most
repulsive and degrading nature ; and he saw that
neither moral nor physical improvement could be
looked for until the cause of these conditions was
removed, and the people of England led from the
congested districts back to the country.

He decided, therefore, to make a practical ex-
periment in social reform, and to this end he com-
menced the foundation of the new village of
Bournville, an example which is undoubtedly
destined to exercise a far-reaching influence.

At the present time 370 houses have been built,
the total population of the village being about
2,000 persons, and he has secured the perpetuation
of the scheme by making over the whole of the
land, consisting of about 330 acres, with the houses
already erected, to a board of trustees. These
trustees receive the whole of the revenues from the
estate, which are to be solely applied to maintain-
ing it, in building new houses, acquiring fresh land,
and generally extending the scheme. The total
value of the property thus handed over to the
trustees is estimated at about ,£180,000. It will
be seen that the scheme is capable of almost
endless development. The capitalist landlord is
eliminated, and as no personal gain accrues to any-
one, all the profits are at the disposal of the trust.

LINDEN ROAD, BOURNVILLE: A TYPICAL VIEW OF THE VILLAGE