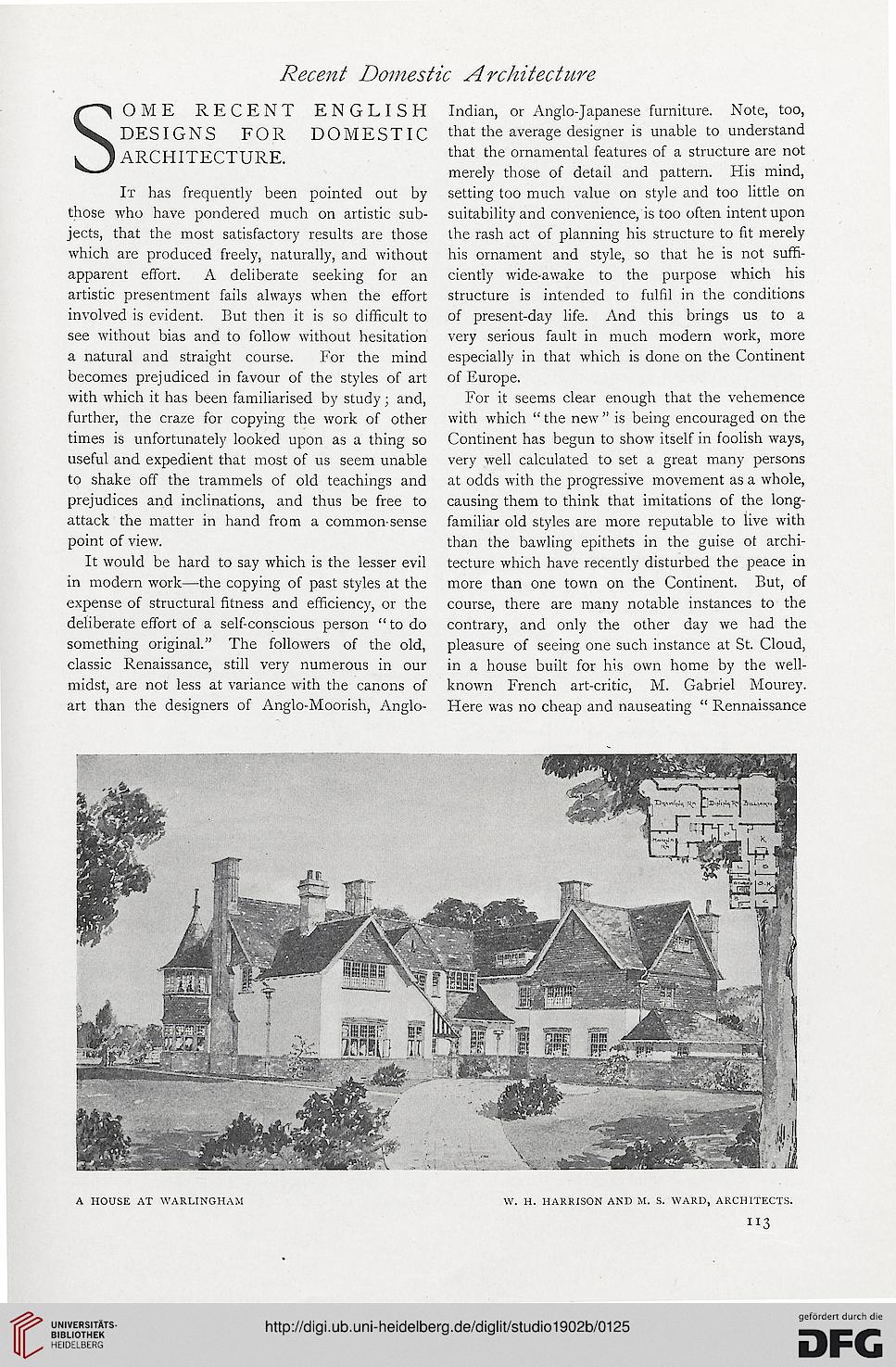 It has frequently been pointed out by
those who have pondered much on artistic sub-
jects, that the most satisfactory results are those
which are produced freely, naturally, and without
apparent effort. A deliberate seeking for an
artistic presentment fails always when the effort
involved is evident. But then it is so difficult to
see without bias and to follow without hesitation
a natural and straight course. For the mind
becomes prejudiced in favour of the styles of art
with which it has been familiarised by study; and,
further, the craze for copying the work of other
times is unfortunately looked upon as a thing so
useful and expedient that most of us seem unable
to shake off the trammels of old teachings and
prejudices and inclinations, and thus be free to
attack the matter in hand from a common-sense
point of view.

It would be hard to say which is the lesser evil
in modern work—the copying of past styles at the
expense of structural fitness and efficiency, or the
deliberate effort of a self-conscious person " to do
something original." The followers of the old,
classic Renaissance, still very numerous in our
midst, are not less at variance with the canons of
art than the designers of Anglo-Moorish, Anglo-

Indian, or Anglo-Japanese furniture. Note, too,
that the average designer is unable to understand
that the ornamental features of a structure are not
merely those of detail and pattern. His mind,
setting too much value on style and too little on
suitability and convenience, is too often intent upon
the rash act of planning his structure to fit merely
his ornament and style, so that he is not suffi-
ciently wide-awake to the purpose which his
structure is intended to fulfil in the conditions
of present-day life. And this brings us to a
very serious fault in much modern work, more
especially in that which is done on the Continent
of Europe.

For it seems clear enough that the vehemence
with which " the new " is being encouraged on the
Continent has begun to show itself in foolish ways,
very well calculated to set a great many persons
at odds with the progressive movement as a whole,
causing them to think that imitations of the long-
familiar old styles are more reputable to live with
than the bawling epithets in the guise ot archi-
tecture which have recently disturbed the peace in
more than one town on the Continent. But, of
course, there are many notable instances to the
contrary, and only the other day we had the
pleasure of seeing one such instance at St. Cloud,
in a house built for his own home by the well-
known French art-critic, M. Gabriel Mourey.
Here was no cheap and nauseating " Rennaissance

A HOUSE AT WARLINGHAM