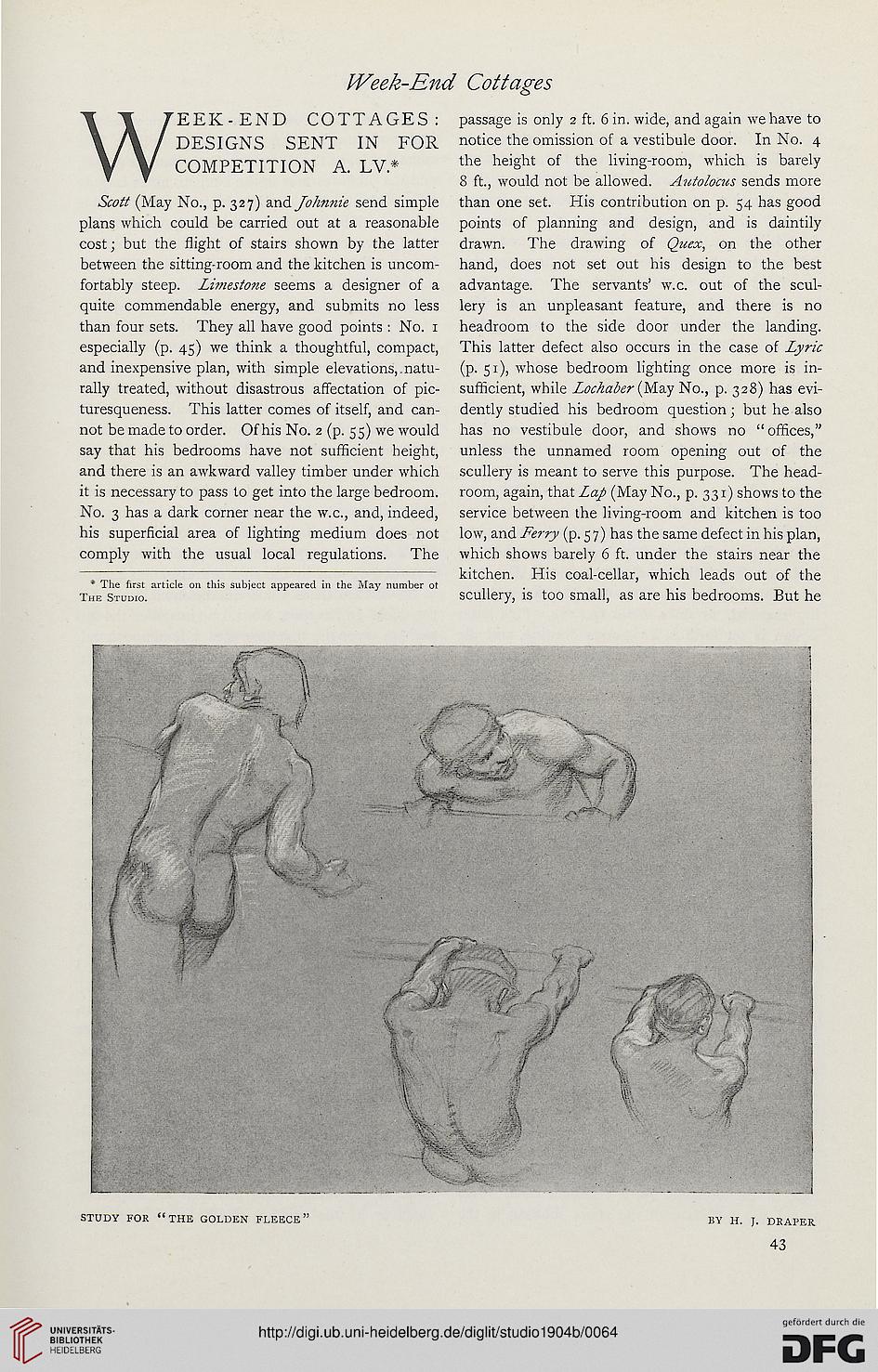 EEK-END COTTAGES: passage is only 2 ft. 6 in. wide, and again we have to

DESIGNS SENT IN FOR notice the omission of a vestibule door. In No. 4

8 ft., would not be allowed. Autolocus sends more
Scott (May No., p. 327) and Johnnie send simple than one set. His contribution on p. 54 has good
plans which could be carried out at a reasonable points of planning and design, and is daintily
cost; but the flight of stairs shown by the latter drawn. The drawing of Quex, on the other
between the sitting-room and the kitchen is uncom- hand, does not set out his design to the best
fortably steep. Limestone seems a designer of a advantage. The servants' w.c. out of the scul-
quite commendable energy, and submits no less lery is an unpleasant feature, and there is no
than four sets. They all have good points: No. 1 headroom to the side door under the landing,
especially (p. 45) we think a thoughtful, compact, This latter defect also occurs in the case of Lyric
and inexpensive plan, with simple elevations,.natu- (p. 51), whose bedroom lighting once more is in-
rally treated, without disastrous affectation of pic- sufficient, while Lockaber (May No., p. 328) has evi-
turesqueness. This latter comes of itself, and can- dently studied his bedroom question; but he also
not be made to order. Of his No. 2 (p. 55) we would has no vestibule door, and shows no "offices,"
say that his bedrooms have not sufficient height, unless the unnamed room opening out of the
and there is an awkward valley timber under which scullery is meant to serve this purpose. The head-
it is necessary to pass to get into the large bedroom, room, again, that Lap (May No., p. 33 r) shows to the
No. 3 has a dark corner near the w.c, and, indeed, service between the living-room and kitchen is too
his superficial area of lighting medium does not low, and Ferry (p. 57) has the same defect in his plan,
comply with the usual local regulations. The which shows barely 6 ft. under the stairs near the

- kitchen. His coal-cellar, which leads out of the

* The first article on this subject appeared in the May number ot _ .

The Studio. scullery, is too small, as are his bedrooms. But he

STUDY FOR "THE GOLDEN FLEECE" BY H. J. DRAPER