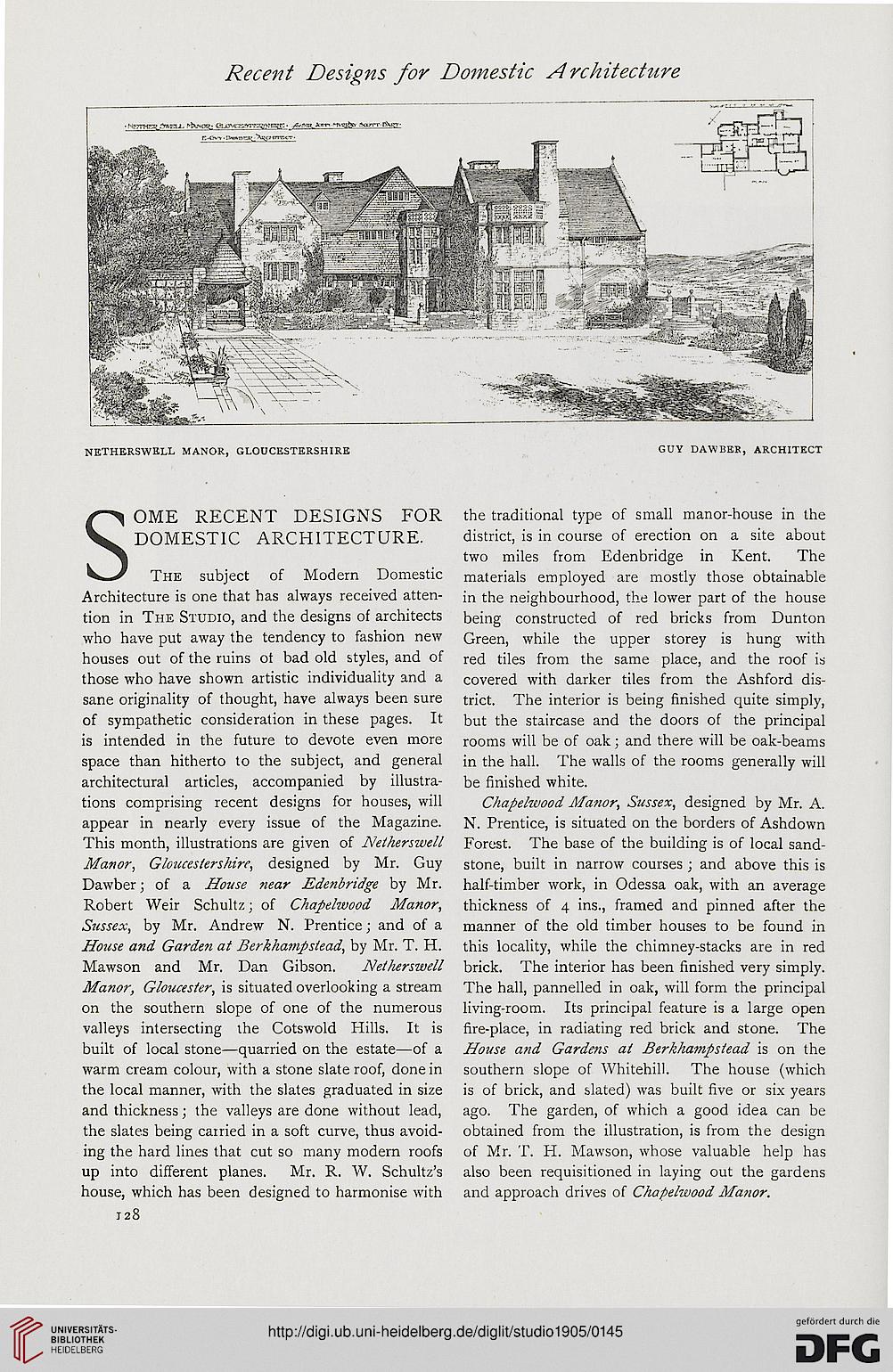 SOME RECENT DESIGNS FOR
DOMESTIC ARCHITECTURE.
The subject of Modern Domestic
Architecture is one that has always received atten-
tion in The Studio, and the designs of architects
who have put away the tendency to fashion new
houses out of the ruins ot bad old styles, and of
those who have shown artistic individuality and a
sane originality of thought, have always been sure
of sympathetic consideration in these pages. It
is intended in the future to devote even more
space than hitherto to the subject, and general
architectural articles, accompanied by illustra-
tions comprising recent designs for houses, will
appear in nearly every issue of the Magazine.
This month, illustrations are given of JVelherswell
Manor, Gloucestershire, designed by Mr. Guy
Dawber; of a House near Edenbridge by Mr.
Robert Weir Schultz; of Chapelwood Manor,
Sussex, by Mr. Andrew N. Prentice; and of a
House and Garden at Berkhampslead, by Mr. T. H.
Mawson and Mr. Dan Gibson. Netherswell
Manor, Gloucester, is situated overlooking a stream
on the southern slope of one of the numerous
valleys intersecting the Cotswold Hills. It is
built of local stone—quarried on the estate—of a
warm cream colour, with a stone slate roof, done in
the local manner, with the slates graduated in size
and thickness; the valleys are done without lead,
the slates being carried in a soft curve, thus avoid-
ing the hard lines that cut so many modern roofs
up into different planes. Mr. R. W. Schultz's
house, which has been designed to harmonise with
128

the traditional type of small manor-house in the
district, is in course of erection on a site about
two miles from Edenbridge in Kent. The
materials employed are mostly those obtainable
in the neighbourhood, the lower part of the house
being constructed of red bricks from Dunton
Green, while the upper storey is hung with
red tiles from the same place, and the roof is
covered with darker tiles from the Ashford dis-
trict. The interior is being finished quite simply,
but the staircase and the doors of the principal
rooms will be of oak; and there will be oak-beams
in the hall. The walls of the rooms generally will
be finished white.

Chapelwood Manor, Sussex, designed by Mr. A.
N. Prentice, is situated on the borders of Ashdown
Forest. The base of the building is of local sand-
stone, built in narrow courses ; and above this is
half-timber work, in Odessa oak, with an average
thickness of 4 ins., framed and pinned after the
manner of the old timber houses to be found in
this locality, while the chimney-stacks are in red
brick. The interior has been finished very simply.
The hall, pannelled in oak, will form the principal
living-room. Its principal feature is a large open
fire-place, in radiating red brick and stone. The
House and Gardens at Berkhampstead is on the
southern slope of Whitehill. The house (which
is of brick, and slated) was built five or six years
ago. The garden, of which a good idea can be
obtained from the illustration, is from the design
of Mr. T. H. Mawson, whose valuable help has
also been requisitioned in laying out the gardens
and approach drives of Chapehvood Manor.