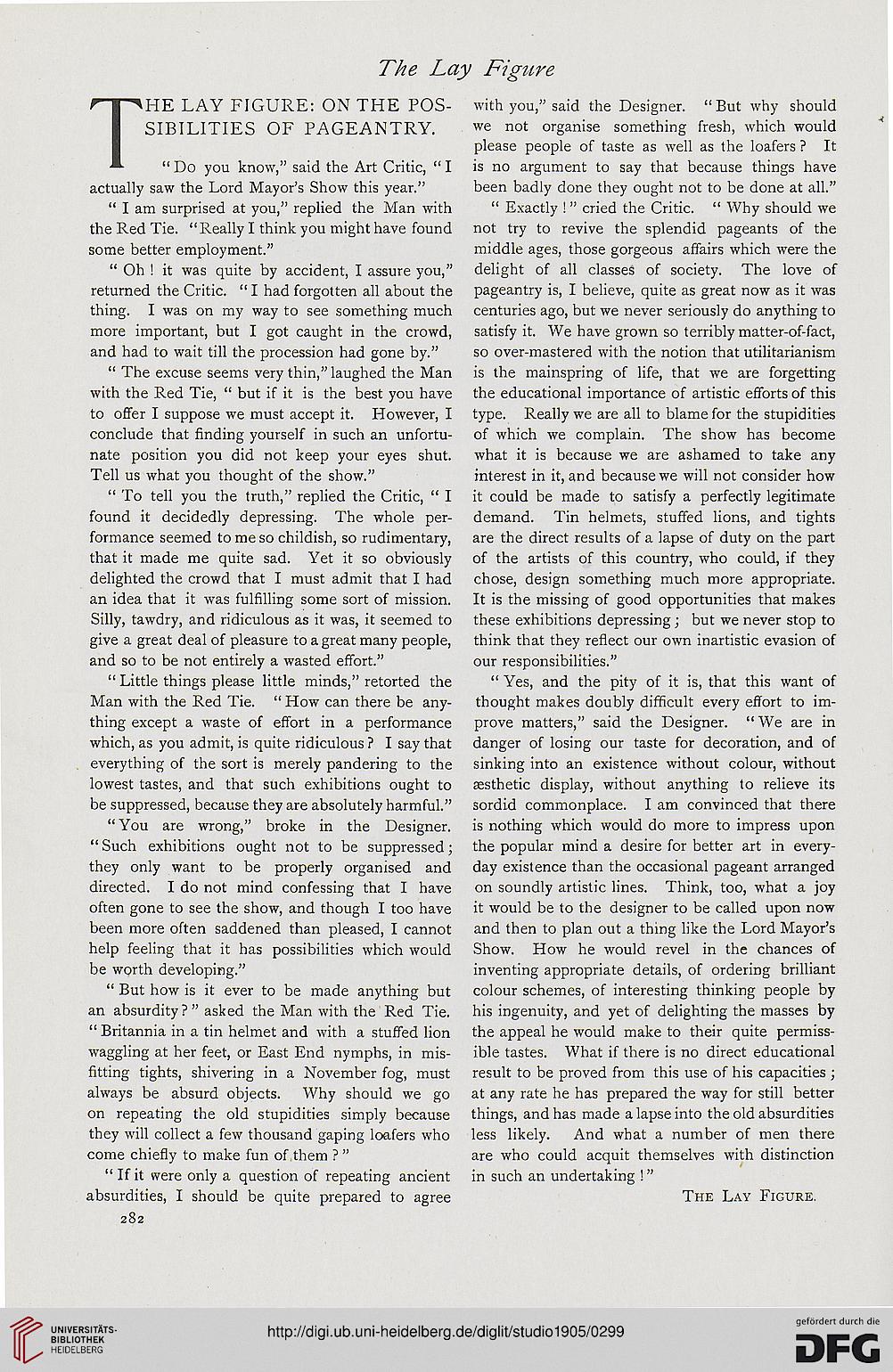 THE LAY FIGURE: ON THE POS-
SIBILITIES OF PAGEANTRY.
" Do you know," said the Art Critic, " I
actually saw the Lord Mayor's Show this year."

" I am surprised at you," replied the Man with
the Red Tie. "Really I think you might have found
some better employment."

" Oh ! it was quite by accident, I assure you,"
returned the Critic. " I had forgotten all about the
thing. I was on my way to see something much
more important, but I got caught in the crowd,
and had to wait till the procession had gone by."

" The excuse seems very thin," laughed the Man
with the Red Tie, " but if it is the best you have
to offer I suppose we must accept it. However, I
conclude that finding yourself in such an unfortu-
nate position you did not keep your eyes shut.
Tell us what you thought of the show."

" To tell you the truth," replied the Critic, " I
found it decidedly depressing. The whole per-
formance seemed to me so childish, so rudimentary,
that it made me quite sad. Yet it so obviously
delighted the crowd that I must admit that I had
an idea that it was fulfilling some sort of mission.
Silly, tawdry, and ridiculous as it was, it seemed to
give a great deal of pleasure to a great many people,
and so to be not entirely a wasted effort."

" Little things please little minds," retorted the
Man with the Red Tie. " How can there be any-
thing except a waste of effort in a performance
which, as you admit, is quite ridiculous ? I say that
everything of the sort is merely pandering to the
lowest tastes, and that such exhibitions ought to
be suppressed, because they are absolutely harmful."

"You are wrong," broke in the Designer.
" Such exhibitions ought not to be suppressed;
they only want to be properly organised and
directed. I do not mind confessing that I have
often gone to see the show, and though I too have
been more often saddened than pleased, I cannot
help feeling that it has possibilities which would
be worth developing."

" But how is it ever to be made anything but
an absurdity?" asked the Man with the Red Tie.
"Britannia in a tin helmet and with a stuffed lion
waggling at her feet, or East End nymphs, in mis-
fitting tights, shivering in a November fog, must
always be absurd objects. Why should we go
on repeating the old stupidities simply because
they will collect a few thousand gaping loafers who
come chiefly to make fun of them ? "

" If it were only a question of repeating ancient
absurdities, I should be quite prepared to agree
282

with you," said the Designer. " But why should
we not organise something fresh, which would
please people of taste as well as the loafers ? It
is no argument to say that because things have
been badly done they ought not to be done at all."

" Exactly !" cried the Critic. " Why should we
not try to revive the splendid pageants of the
middle ages, those gorgeous affairs which were the
delight of all classes of society. The love of
pageantry is, I believe, quite as great now as it was
centuries ago, but we never seriously do anything to
satisfy it. We have grown so terribly matter-of-fact,
so over-mastered with the notion that utilitarianism
is the mainspring of life, that we are forgetting
the educational importance of artistic efforts of this
type. Really we are all to blame for the stupidities
of which we complain. The show has become
what it is because we are ashamed to take any
interest in it, and because we will not consider how
it could be made to satisfy a perfectly legitimate
demand. Tin helmets, stuffed lions, and tights
are the direct results of a lapse of duty on the part
of the artists of this country, who could, if they
chose, design something much more appropriate.
It is the missing of good opportunities that makes
these exhibitions depressing; but we never stop to
think that they reflect our own inartistic evasion of
our responsibilities."

" Yes, and the pity of it is, that this want of
thought makes doubly difficult every effort to im-
prove matters," said the Designer. " We are in
danger of losing our taste for decoration, and of
sinking into an existence without colour, without
aesthetic display, without anything to relieve its
sordid commonplace. I am convinced that there
is nothing which would do more to impress upon
the popular mind a desire for better art in every-
day existence than the occasional pageant arranged
on soundly artistic lines. Think, too, what a joy
it would be to the designer to be called upon now
and then to plan out a thing like the Lord Mayor's
Show. How he would revel in the chances of
inventing appropriate details, of ordering brilliant
colour schemes, of interesting thinking people by
his ingenuity, and yet of delighting the masses by
the appeal he would make to their quite permiss-
ible tastes. What if there is no direct educational
result to be proved from this use of his capacities ;
at any rate he has prepared the way for still better
things, and has made a lapse into the old absurdities
less likely. And what a number of men there
are who could acquit themselves with distinction
in such an undertaking !"