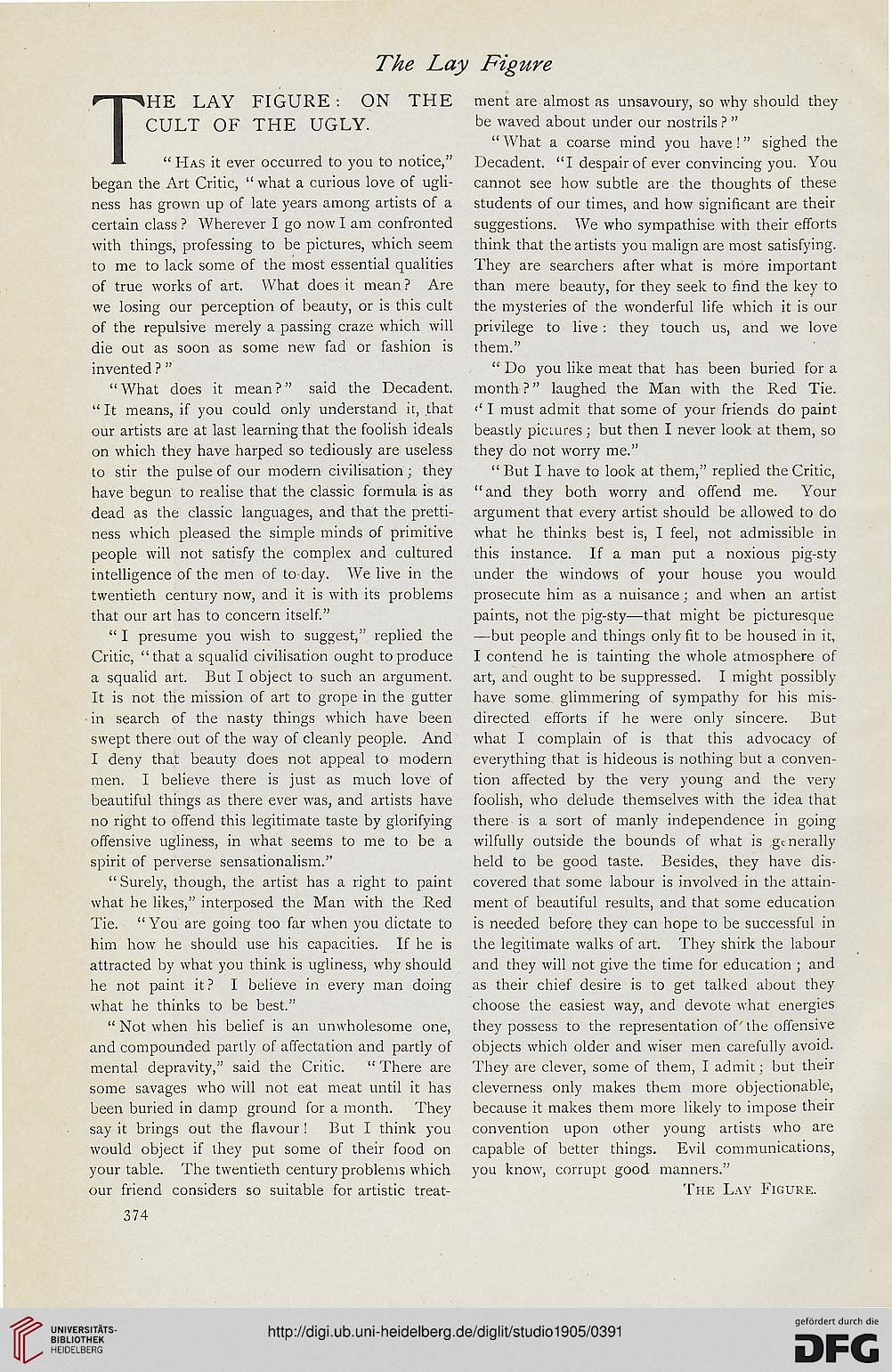 THE LAY FIGURE: ON THE
CULT OF THE UGLY.
" Has it ever occurred to you to notice,"
began the Art Critic, " what a curious love of ugli-
ness has grown up of late years among artists of a
certain class ? Wherever I go now I am confronted
with things, professing to be pictures, which seem
to me to lack some of the most essential qualities
of true works of art. What does it mean ? Are
we losing our perception of beauty, or is this cult
of the repulsive merely a passing craze which will
die out as soon as some new fad or fashion is
invented ? "

" What does it mean ?" said the Decadent.
" It means, if you could only understand it, that
our artists are at last learning that the foolish ideals
on which they have harped so tediously are useless
to stir the pulse of our modern civilisation ; they
have begun to realise that the classic formula is as
dead as the classic languages, and that the pretti-
ness which pleased the simple minds of primitive
people will not satisfy the complex and cultured
intelligence of the men of to day. We live in the
twentieth century now, and it is with its problems
that our art has to concern itself."

" I presume you wish to suggest," replied the
Critic, "that a squalid civilisation ought to produce
a squalid art. But I object to such an argument.
It is not the mission of art to grope in the gutter
in search of the nasty things which have been
swept there out of the way of cleanly people. And
I deny that beauty does not appeal to modern
men. I believe there is just as much love of
beautiful things as there ever was, and artists have
no right to offend this legitimate taste by glorifying
offensive ugliness, in what seems to me to be a
spirit of perverse sensationalism."

" Surely, though, the artist has a right to paint
what he likes," interposed the Man with the Red
Tie. "You are going too far when you dictate to
him how he should use his capacities. If he is
attracted by what you think is ugliness, why should
he not paint it ? I believe in every man doing
what he thinks to be best."

" Not when his belief is an unwholesome one,
and compounded partly of affectation and partly of
mental depravity," said the Critic. " There are
some savages who will not eat meat until it has
been buried in damp ground for a month. They
say it brings out the flavour ! But I think you
would object if they put some of their food on
your table. The twentieth century problems which
our friend considers so suitable for artistic treat-

ment are almost as unsavoury, so why should they
be waved about under our nostrils ? "

" What a coarse mind you have !" sighed the
Decadent. "I despair of ever convincing you. You
cannot see how subtle are the thoughts of these
students of our times, and how significant are their
suggestions. We who sympathise with their efforts
think that the artists you malign are most satisfying.
They are searchers after what is more important
than mere beauty, for they seek to find the key to
the mysteries of the wonderful life which it is our
privilege to live : they touch us, and we love
them."

" Do you like meat that has been buried for a
month?" laughed the Man with the Red Tie.
'' I must admit that some of your friends do paint
beastly pictures; but then I never look at them, so
they do not worry me."

"But I have to look at them," replied the Critic,
"and they both worry and offend me. Your
argument that every artist should be allowed to do
what he thinks best is, I feel, not admissible in
this instance. If a man put a noxious pig-sty
under the windows of your house you would
prosecute him as a nuisance; and when an artist
paints, not the pig-sty—that might be picturesque
—but people and things only fit to be housed in it,
I contend he is tainting the whole atmosphere of
art, and ought to be suppressed. I might possibly
have some glimmering of sympathy for his mis-
directed efforts if he were only sincere. But
what I complain of is that this advocacy of
everything that is hideous is nothing but a conven-
tion affected by the very young and the very
foolish, who delude themselves with the idea that
there is a sort of manly independence in going
wilfully outside the bounds of what is .generally
held to be good taste. Besides, they have dis-
covered that some labour is involved in the attain-
ment of beautiful results, and that some education
is needed before they can hope to be successful in
the legitimate walks of art. They shirk the labour
and they will not give the time for education ; and
as their chief desire is to get talked about they
choose the easiest way, and devote what energies
they possess to the representation of 'the offensive
objects which older and wiser men carefully avoid.
They are clever, some of them, I admit; but their
cleverness only makes them more objectionable,
because it makes them more likely to impose their
convention upon other young artists who are
capable of better things. Evil communications,
you know, corrupt good manners."