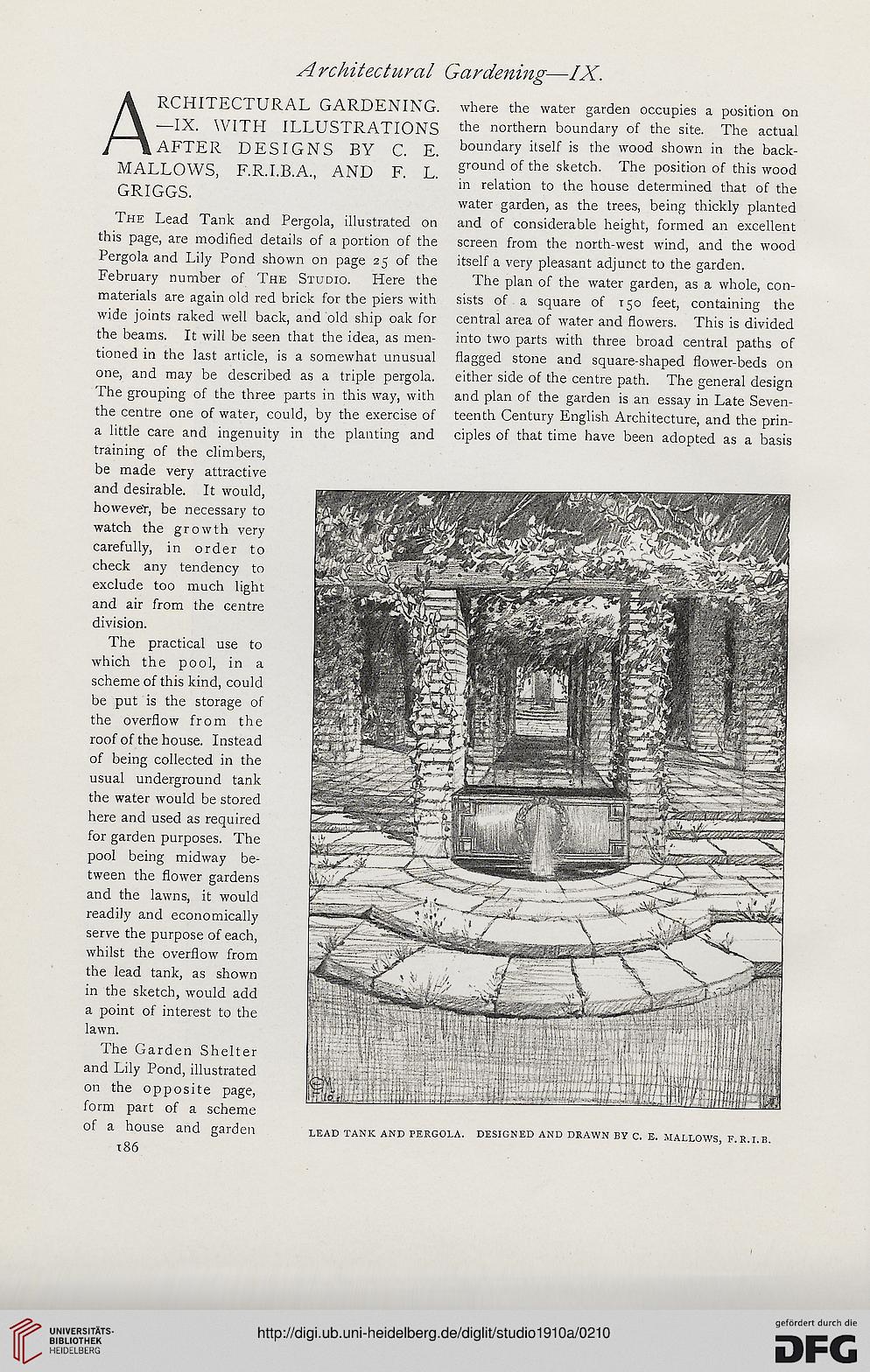 The Lead Tank and Pergola, illustrated on
this page, are modified details of a portion of the
Pergola and Lily Pond shown on page 25 of the
February number of The Studio. Here the
materials are again old red brick for the piers with
wide joints raked well back, and old ship oak for
the beams. It will be seen that the idea, as men-
tioned in the last article, is a somewhat unusual
one, and may be described as a triple pergola.
The grouping of the three parts in this way, with
the centre one of water, could, by the exercise of
a little care and ingenuity in the planting and
training of the climbers,
be made very attractive
and desirable. It would,
however, be necessary to
watch the growth very
carefully, in order to
check any tendency to
exclude too much light
and air from the centre
division.

The practical use to
which the pool, in a
scheme of this kind, could
be put is the storage of
the overflow from the
roof of the house. Instead
of being collected in the
usual underground tank
the water would be stored
here and used as required
for garden purposes. The
pool being midway be-
tween the flower gardens
and the lawns, it would
readily and economically
serve the purpose of each,
whilst the overflow from
the lead tank, as shown
in the sketch, would add
a point of interest to the
lawn.

The Garden Shelter
and Lily Pond, illustrated
on the opposite page,
form part of a scheme
of a house and garden
186

where the water garden occupies a position on
the northern boundary of the site. The actual
boundary itself is the wood shown in the back-
ground of the sketch. The position of this wood
in relation to the house determined that of the
water garden, as the trees, being thickly planted
and of considerable height, formed an excellent
screen from the north-west wind, and the wood
itself a very pleasant adjunct to the garden.

The plan of the water garden, as a whole, con-
sists of a square of 150 feet, containing the
central area of water and flowers. This is divided
into two parts with three broad central paths of
flagged stone and square-shaped flower-beds on
either side of the centre path. The general design
and plan of the garden is an essay in Late Seven-
teenth Century English Architecture, and the prin-
ciples of that time have been adopted as a basis