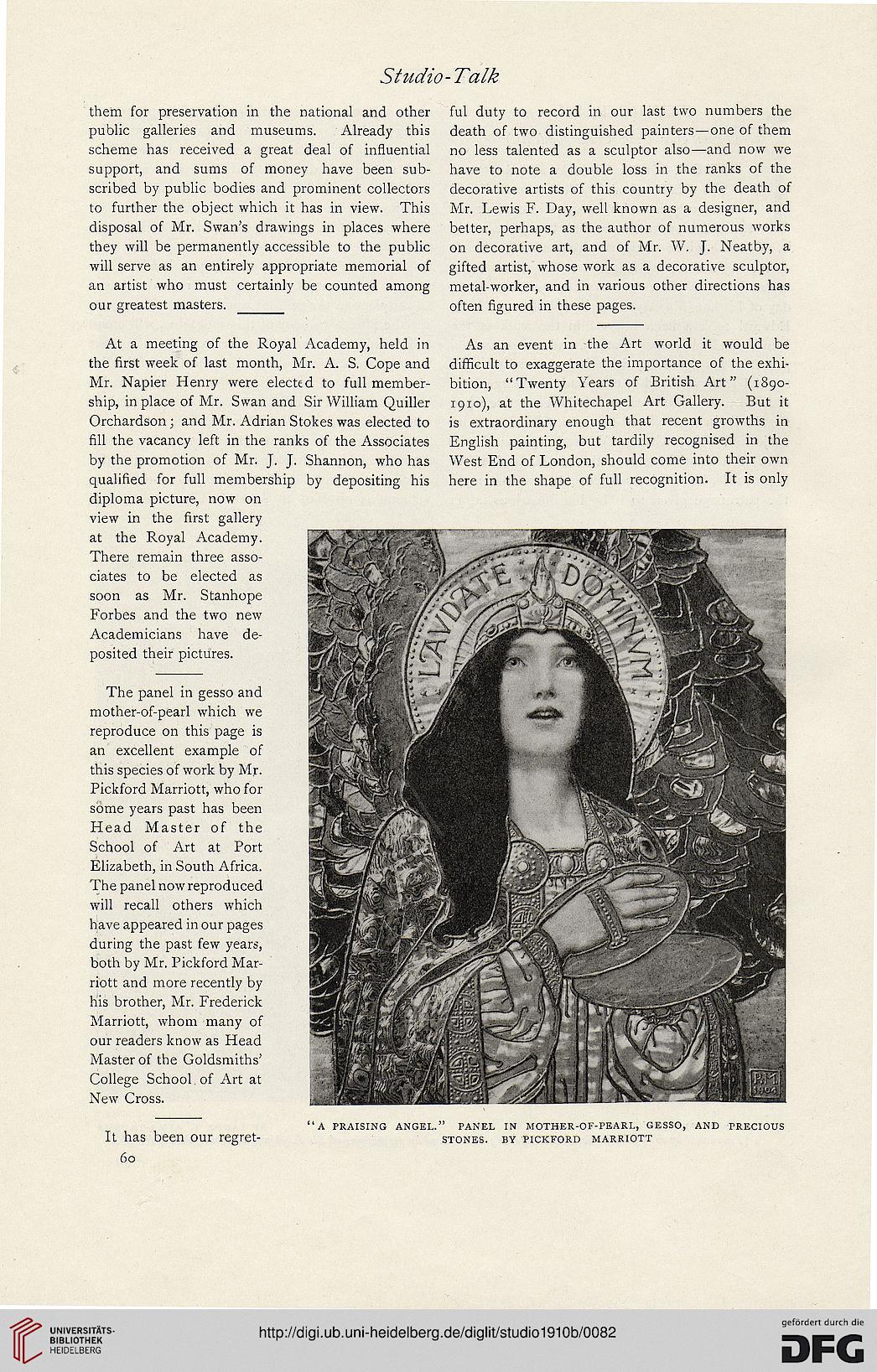 them for preservation in the national and other
public galleries and museums. Already this
scheme has received a great deal of influential
support, and sums of money have been sub-
scribed by public bodies and prominent collectors
to further the object which it has in view. This
disposal of Mr. Swan’s drawings in places where
they will be permanently accessible to the public
will serve as an entirely appropriate memorial of
an artist who must certainly be counted among
our greatest masters. _

ful duty to record in our last two numbers the
death of two distinguished painters—one of them
no less talented as a sculptor also—and now we
have to note a double loss in the ranks of the
decorative artists of this country by the death of
Mr. Lewis F. Day, well known as a designer, and
better, perhaps, as the author of numerous works
on decorative art, and of Mr. W. J. Neatby, a
gifted artist, whose work as a decorative sculptor,
metal-worker, and in various other directions has
often figured in these pages.

The panel in gesso and
mother-of-pearl which we
reproduce on this page is
an excellent example of
this species of work by Mr.

Pickford Marriott, who for
some years past has been
Head Master of the
School of Art at Port
Elizabeth, in South Africa.

The panel now reproduced
will recall others which
have appeared in our pages
during the past few years,
both by Mr. Pickford Mar-
riott and more recently by
his brother, Mr. Frederick
Marriott, whom many of
our readers know as Head
Master of the Goldsmiths’

“a praising angel.” panel in mother-of-pearl, gesso, AND TRECIOUS
It has been our regret- stones, by pickford Marriott

At a meeting of the Royal Academy, held in
the first week of last month, Mr. A. S. Cope and
Mr. Napier Henry were elected to full member-
ship, in place of Mr. Swan and Sir William Quiller
Orchardson; and Mr. Adrian Stokes was elected to
fill the vacancy left in the ranks of the Associates
by the promotion of Mr. J. J. Shannon, who has
qualified for full membership by depositing his
diploma picture, now on
view in the first gallery
at the Royal Academy.

There remain three asso-
ciates to be elected as
soon as Mr. Stanhope
Forbes and the two new
Academicians have de-
posited their pictures.

As an event in the Art world it would be
difficult to exaggerate the importance of the exhi-
bition, “Twenty Years of British Art” (1890-
1910), at the Whitechapel Art Gallery. But it
is extraordinary enough that recent growths in
English painting, but tardily recognised in the
West End of London, should come into their own
here in the shape of full recognition. It is only