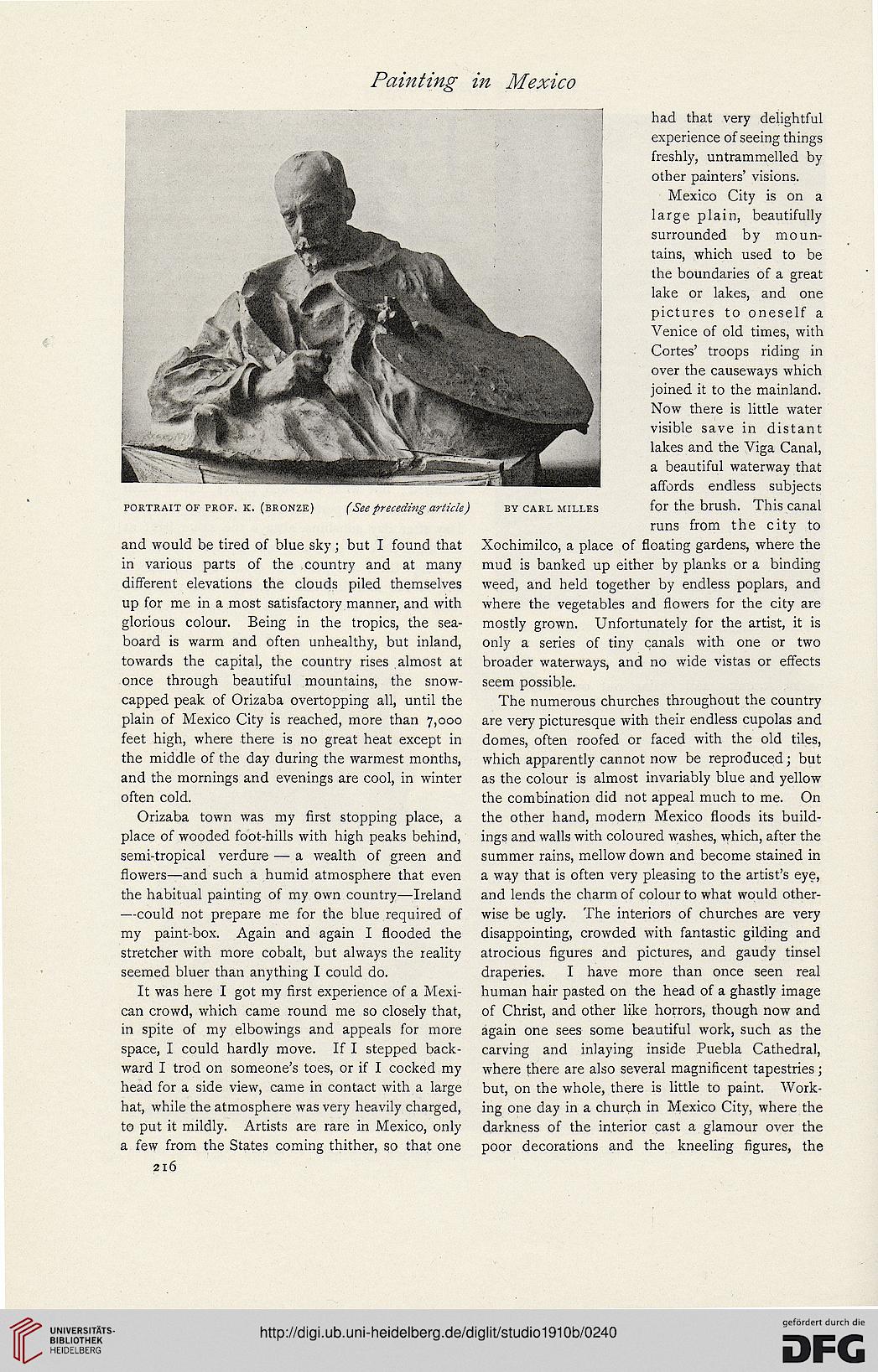 and would be tired of blue sky; but I found that
in various parts of the country and at many
different elevations the clouds piled themselves
up for me in a most satisfactory manner, and with
glorious colour. Being in the tropics, the sea-
board is warm and often unhealthy, but inland,
towards the capital, the country rises almost at
once through beautiful mountains, the snow-
capped peak of Orizaba overtopping all, until the
plain of Mexico City is reached, more than 7,000
feet high, where there is no great heat except in
the middle of the day during the warmest months,
and the mornings and evenings are cool, in winter
often cold.

Orizaba town was my first stopping place, a
place of wooded foot-hills with high peaks behind,
semi-tropical verdure — a wealth of green and
flowers—and such a humid atmosphere that even
the habitual painting of my own country—Ireland
—could not prepare me for the blue required of
my paint-box. Again and again I flooded the
stretcher with more cobalt, but always the reality
seemed bluer than anything I could do.

It was here I got my first experience of a Mexi-
can crowd, which came round me so closely that,
in spite of my elbowings and appeals for more
space, I could hardly move. If I stepped back-
ward I trod on someone’s toes, or if I cocked my
head for a side view, came in contact with a large
hat, while the atmosphere was very heavily charged,
to put it mildly. Artists are rare in Mexico, only
a few from the States coming thither, so that one
216

had that very delightful
experience of seeing things
freshly, untrammelled by
other painters’ visions.

Mexico City is on a
large plain, beautifully
surrounded by moun-
tains, which used to be
the boundaries of a great
lake or lakes, and one
pictures to oneself a
Venice of old times, with
Cortes’ troops riding in
over the causeways which
joined it to the mainland.
Now there is little water
visible save in distant
lakes and the Viga Canal,
a beautiful waterway that
affords endless subjects
for the brush. This canal
runs from the city to
Xochimilco, a place of floating gardens, where the
mud is banked up either by planks or a binding
weed, and held together by endless poplars, and
where the vegetables and flowers for the city are
mostly grown. Unfortunately for the artist, it is
only a series of tiny canals with one or two
broader waterways, and no wide vistas or effects
seem possible.

The numerous churches throughout the country
are very picturesque with their endless cupolas and
domes, often roofed or faced with the old tiles,
which apparently cannot now be reproduced ; but
as the colour is almost invariably blue and yellow
the combination did not appeal much to me. On
the other hand, modem Mexico floods its build-
ings and walls with coloured washes, which, after the
summer rains, mellow down and become stained in
a way that is often very pleasing to the artist’s eye,
and lends the charm of colour to what would other-
wise be ugly. The interiors of churches are very
disappointing, crowded with fantastic gilding and
atrocious figures and pictures, and gaudy tinsel
draperies. I have more than once seen real
human hair pasted on the head of a ghastly image
of Christ, and other like horrors, though now and
again one sees some beautiful work, such as the
carving and inlaying inside Puebla Cathedral,
where there are also several magnificent tapestries;
but, on the whole, there is little to paint. Work-
ing one day in a church in Mexico City, where the
darkness of the interior cast a glamour over the
poor decorations and the kneeling figures, the