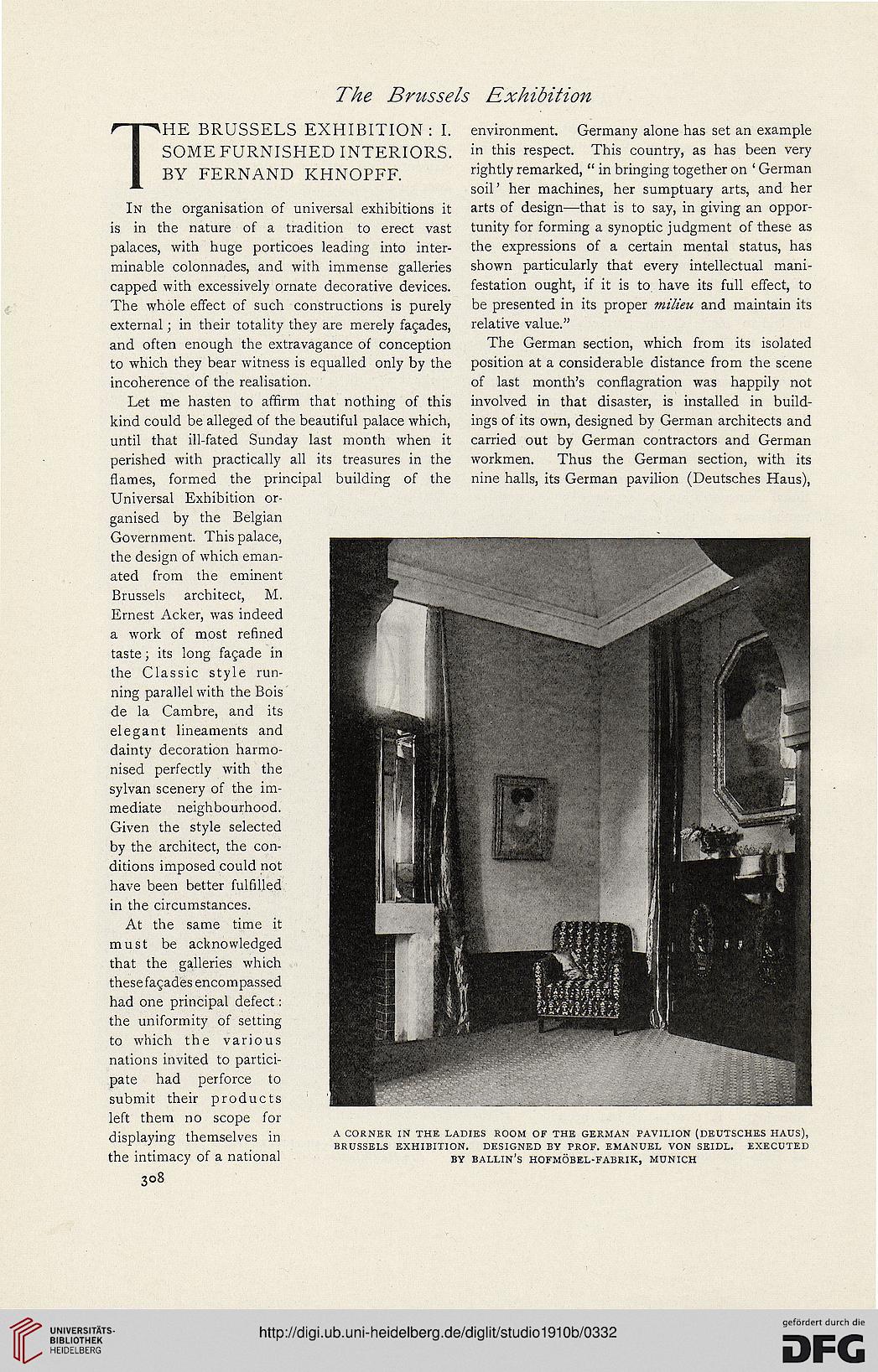 THE BRUSSELS EXHIBITION: I.
SOME FURNISHED INTERIORS.
BY FERNAND KHNOPFF.

In the organisation of universal exhibitions it
is in the nature of a tradition to erect vast
palaces, with huge porticoes leading into inter-
minable colonnades, and with immense galleries
capped with excessively ornate decorative devices.
The whole effect of such constructions is purely
external; in their totality they are merely fagades,
and often enough the extravagance of conception
to which they bear witness is equalled only by the
incoherence of the realisation.

Let me hasten to affirm that nothing of this
kind could be alleged of the beautiful palace which,
until that ill-fated Sunday last month when it
perished with practically all its treasures in the
flames, formed the principal building of the
Universal Exhibition or-
ganised by the Belgian
Government. This palace,
the design of which eman-
ated from the eminent
Brussels architect, M.

Ernest Acker, was indeed
a work of most refined
taste; its long fagade in
the Classic style run-
ning parallel with the Bois
de la Carnbre, and its
elegant lineaments and
dainty decoration harmo-
nised perfectly with the
sylvan scenery of the im-
mediate neighbourhood.

Given the style selected
by the architect, the con-
ditions imposed could not
have been better fulfilled
in the circumstances.

At the same time it
must be acknowledged
that the galleries which
these fagades encompassed
had one principal defect:
the uniformity of setting
to which the various
nations invited to partici-
pate had perforce to
submit their products
left them no scope for
displaying themselves in
the intimacy of a national
3°8

environment. Germany alone has set an example
in this respect. This country, as has been very
rightly remarked, “ in bringing together on 1 German
soil ’ her machines, her sumptuary arts, and her
arts of design—that is to say, in giving an oppor-
tunity for forming a synoptic judgment of these as
the expressions of a certain mental status, has
shown particularly that every intellectual mani-
festation ought, if it is to have its full effect, to
be presented in its proper milieu and maintain its
relative value.”

The German section, which from its isolated
position at a considerable distance from the scene
of last month’s conflagration was happily not
involved in that disaster, is installed in build-
ings of its own, designed by German architects and
carried out by German contractors and German
workmen. Thus the German section, with its
nine halls, its German pavilion (Deutsches Haus),