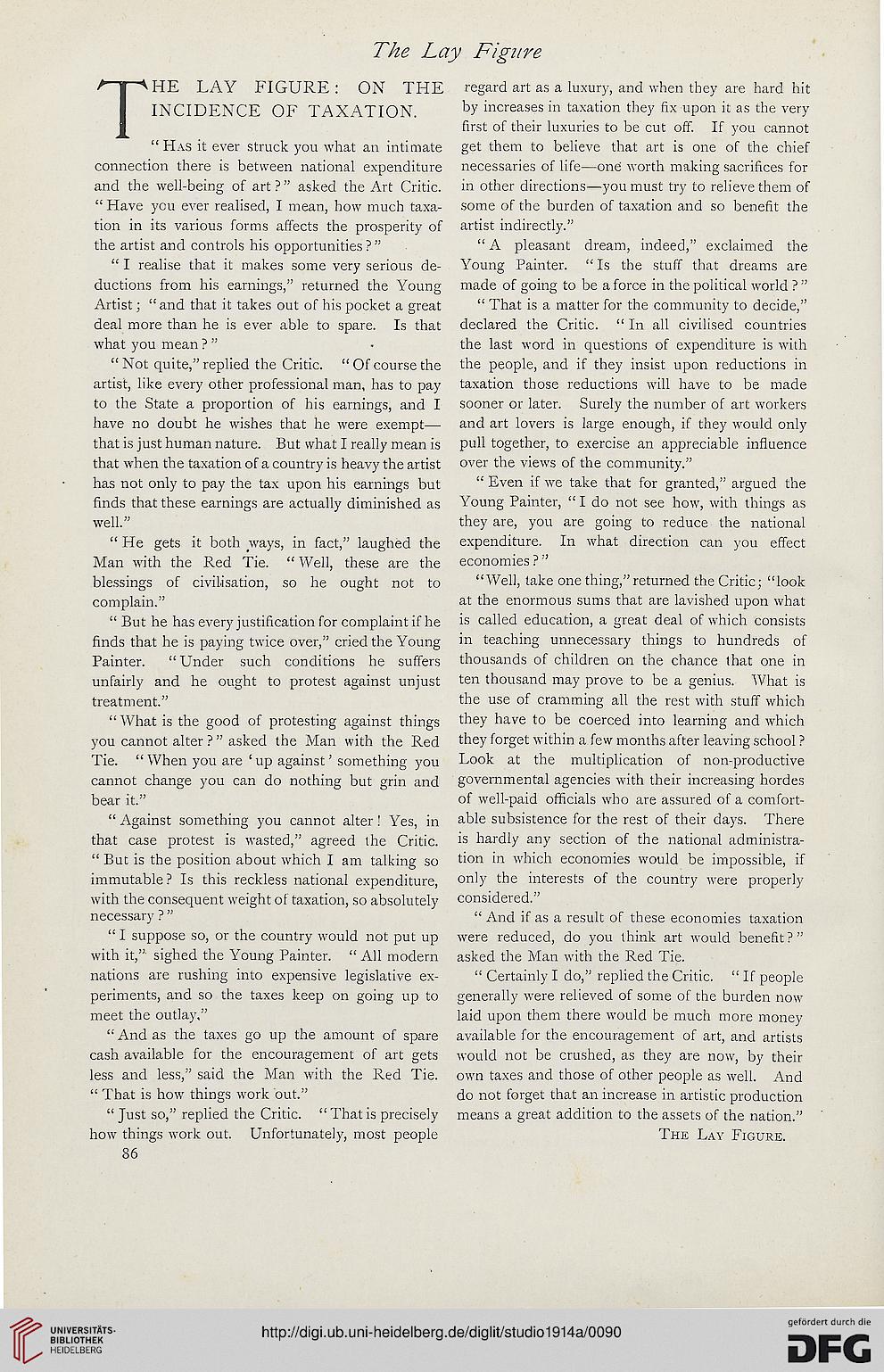 HE LAY FIGURE: ON THE
INCIDENCE OF TAXATION.

" Has it ever struck you what an intimate
connection there is between national expenditure
and the well-being of art ? " asked the Art Critic.
" Have you ever realised, I mean, how much taxa-
tion in its various forms affects the prosperity of
the artist and controls his opportunities ? "

" I realise that it makes some very serious de-
ductions from his earnings," returned the Young
Artist; " and that it takes out of his pocket a great
deal more than he is ever able to spare. Is that
what you mean ? "

" Not quite," replied the Critic. " Of course the
artist, like every other professional man, has to pay
to the State a proportion of his earnings, and I
have no doubt he wishes that he were exempt—
that is just human nature. But what I really mean is
that when the taxation of a country is heavy the artist
has not only to pay the tax upon his earnings but
finds that these earnings are actually diminished as
well."

" He gets it both ways, in fact," laughed the
Man with the Red Tie. " Well, these are the
blessings of civilisation, so he ought not to
complain."

" But he has every justification for complaint if he
finds that he is paying twice over," cried the Young
Painter. "Under such conditions he suffers
unfairly and he ought to protest against unjust
treatment."

" What is the good of protesting against things
you cannot alter ?" asked the Man with the Red
Tie. " When you are ' up against' something you
cannot change you can do nothing but grin and
bear it."

" Against something you cannot alter! Yes, in
that case protest is wasted," agreed the Critic.
" But is the position about which I am talking so
immutable ? Is this reckless national expenditure,
with the consequent weight of taxation, so absolutely
necessary ? "

" I suppose so, or the country would not put up
with it," sighed the Young Painter. " All modern
nations are rushing into expensive legislative ex-
periments, and so the taxes keep on going up to
meet the outlay,"

" And as the taxes go up the amount of spare
cash available for the encouragement of art gets
less and less," said the Man with the Red Tie.
" That is how things work but."

" Just so," replied the Critic. "That is precisely
how things work out. Unfortunately, most people
86

regard art as a luxury, and when they are hard hit
by increases in taxation they fix upon it as the very
first of their luxuries to be cut off. If you cannot
get them to believe that art is one of the chief
necessaries of life—one' worth making sacrifices for
in other directions—you must try to relieve them of
some of the burden of taxation and so benefit the
artist indirectly."

" A pleasant dream, indeed," exclaimed the
Young Painter. " Is the stuff that dreams are
made of going to be a force in the political world ? "

" That is a matter for the community to decide,"
declared the Critic. " In all civilised countries
the last word in questions of expenditure is with
the people, and if they insist upon reductions in
taxation those reductions will have to be made
sooner or later. Surely the number of art workers
and art lovers is large enough, if they would only
pull together, to exercise an appreciable influence
over the views of the community."

" Even if we take that for granted," argued the
Young Painter, " I do not see how, with things as
they are, you are going to reduce the national
expenditure. In what direction can you effect
economies ? "

"Well, take one thing," returned the Critic; "look
at the enormous sums that are lavished upon what
is called education, a great deal of which consists
in teaching unnecessary things to hundreds of
thousands of children on the chance that one in
ten thousand may prove to be a genius. What is
the use of cramming all the rest with stuff which
they have to be coerced into learning and which
they forget within a few months after leaving school ?
Look at the multiplication of non-productive
governmental agencies with their increasing hordes
of well-paid officials who are assured of a comfort-
able subsistence for the rest of their days. There
is hardly any section of the national administra-
tion in which economies would be impossible, if
only the interests of the country were properly
considered."

" And if as a result of these economies taxation
were reduced, do you think art would benefit?"
asked the Man with the Red Tie.

" Certainly I do," replied the Critic. " If people
generally were relieved of some of the burden now
laid upon them there would be much more money
available for the encouragement of art, and artists
would not be crushed, as they are now, by their
own taxes and those of other people as well. And
do not forget that an increase in artistic production
means a great addition to the assets of the nation."