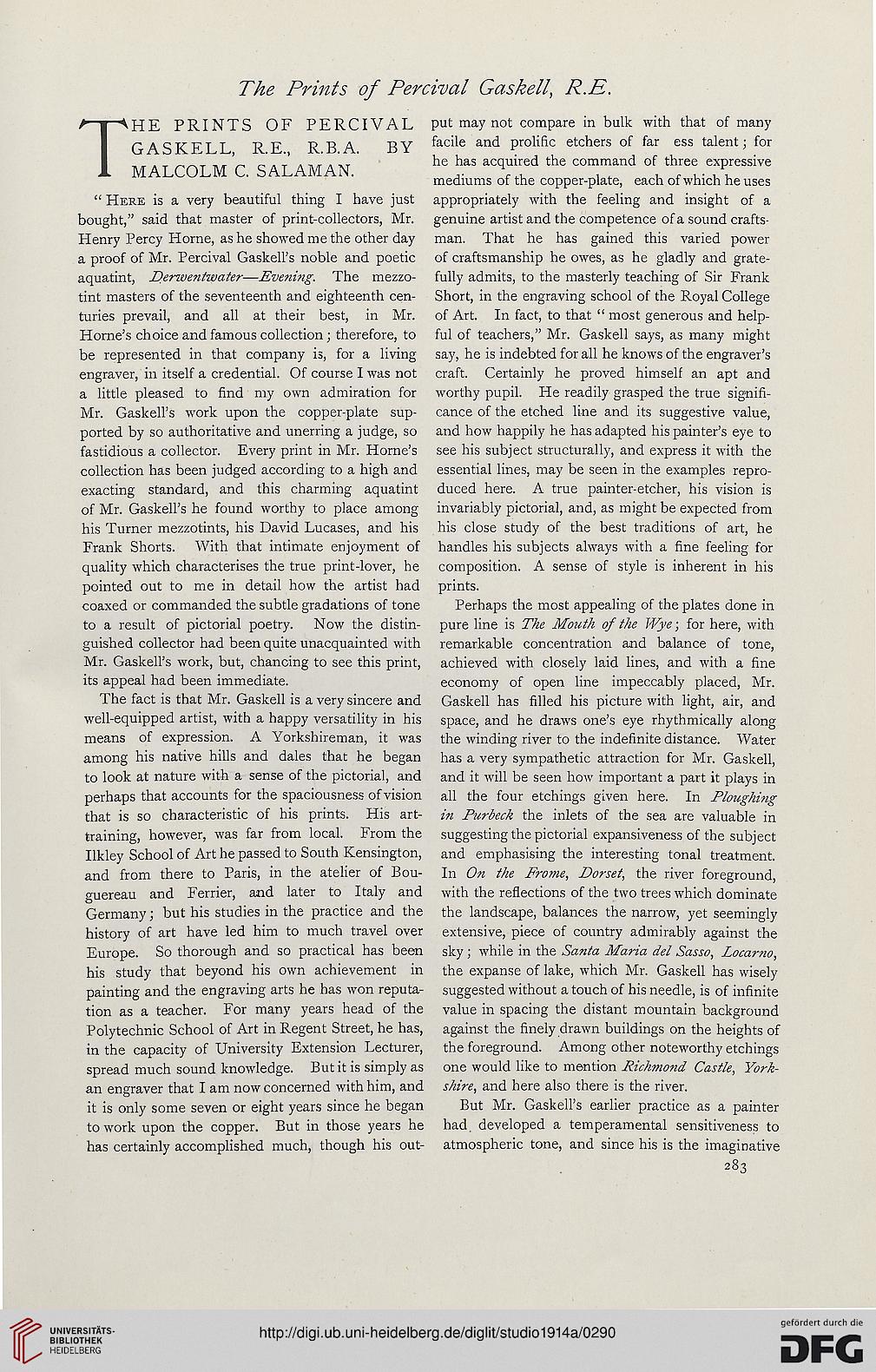 Information about OCR text
The Prints of Per civ al Gaskell, R.E.

" Here is a very beautiful thing I have just
bought," said that master of print-collectors, Mr.
Henry Percy Home, as he showed me the other day
a proof of Mr. Percival Gaskell's noble and poetic
aquatint, Derwentwater—Evening. The mezzo-
tint masters of the seventeenth and eighteenth cen-
turies prevail, and all at their best, in Mr.
Home's choice and famous collection ; therefore, to
be represented in that company is, for a living
engraver, in itself a credential. Of course I was not
a little pleased to find my own admiration for
Mr. Gaskell's work upon the copper-plate sup-
ported by so authoritative and unerring a judge, so
fastidious a collector. Every print in Mr. Home's
collection has been judged according to a high and
exacting standard, and this charming aquatint
of Mr. Gaskell's he found worthy to place among
his Turner mezzotints, his David Lucases, and his
Frank Shorts. With that intimate enjoyment of
quality which characterises the true print-lover, he
pointed out to me in detail how the artist had
coaxed or commanded the subtle gradations of tone
to a result of pictorial poetry. Now the distin-
guished collector had been quite unacquainted with
Mr. Gaskell's work, but, chancing to see this print,
its appeal had been immediate.

The fact is that Mr. Gaskell is a very sincere and
well-equipped artist, with a happy versatility in his
means of expression. A Yorkshireman, it was
among his native hills and dales that he began
to look at nature with a sense of the pictorial, and
perhaps that accounts for the spaciousness of vision
that is so characteristic of his prints. His art-
training, however, was far from local. From the
Ilkley School of Art he passed to South Kensington,
and from there to Paris, in the atelier of Bou-
guereau and Ferrier, and later to Italy and
Germany; but his studies in the practice and the
history of art have led him to much travel over
Europe. So thorough and so practical has been
his study that beyond his own achievement in
painting and the engraving arts he has won reputa-
tion as a teacher. For many years head of the
Polytechnic School of Art in Regent Street, he has,
in the capacity of University Extension Lecturer,
spread much sound knowledge. But it is simply as
an engraver that I am now concerned with him, and
it is only some seven or eight years since he began
to work upon the copper. But in those years he
has certainly accomplished much, though his out-

put may not compare in bulk with that of many
facile and prolific etchers of far ess talent; for
he has acquired the command of three expressive
mediums of the copper-plate, each of which he uses
appropriately with the feeling and insight of a
genuine artist and the competence of a sound crafts-
man. That he has gained this varied power
of craftsmanship he owes, as he gladly and grate-
fully admits, to the masterly teaching of Sir Frank
Short, in the engraving school of the Royal College
of Art. In fact, to that " most generous and help-
ful of teachers," Mr. Gaskell says, as many might
say, he is indebted for all he knows of the engraver's
craft. Certainly he proved himself an apt and
worthy pupil. He readily grasped the true signifi-
cance of the etched line and its suggestive value,
and how happily he has adapted his painter's eye to
see his subject structurally, and express it with the
essential lines, may be seen in the examples repro-
duced here. A true painter-etcher, his vision is
invariably pictorial, and, as might be expected from
his close study of the best traditions of art, he
handles his subjects always with a fine feeling for
composition. A sense of style is inherent in his
prints.

Perhaps the most appealing of the plates done in
pure line is The Mouth of the Wye; for here, with
remarkable concentration and balance of tone,
achieved with closely laid lines, and with a fine
economy of open line impeccably placed, Mr.
Gaskell has filled his picture with light, air, and
space, and he draws one's eye rhythmically along
the winding river to the indefinite distance. Water
has a very sympathetic attraction for Mr. Gaskell,
and it will be seen how important a part it plays in
all the four etchings given here. In Ploughing
in Purbeck the inlets of the sea are valuable in
suggesting the pictorial expansiveness of the subject
and emphasising the interesting tonal treatment.
In On the Frome, Dorset, the river foreground,
with the reflections of the two trees which dominate
the landscape, balances the narrow, yet seemingly
extensive, piece of country admirably against the
sky ; while in the Santa Maria del Sasso, Locarno,
the expanse of lake, which Mr. Gaskell has wisely
suggested without a touch of his needle, is of infinite
value in spacing the distant mountain background
against the finely drawn buildings on the heights of
the foreground. Among other noteworthy etchings
one would like to mention Richmond Castle, York-
shire, and here also there is the river.

But Mr. Gaskell's earlier practice as a painter
had developed a temperamental sensitiveness to
atmospheric tone, and since his is the imaginative