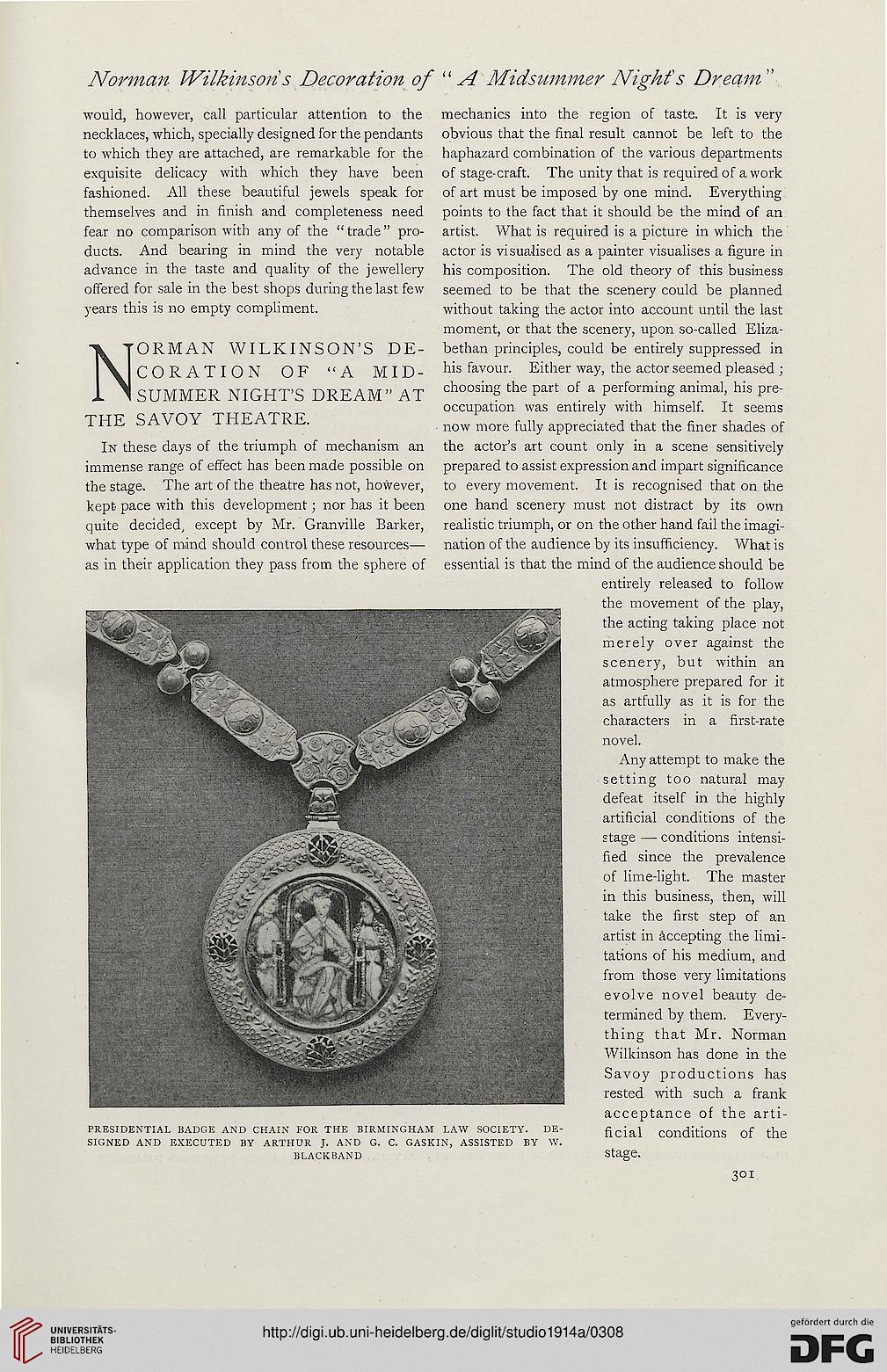 would, however, call particular attention to the mechanics into the region of taste. It is very

necklaces, which, specially designed for the pendants obvious that the final result cannot be left to the

to which they are attached, are remarkable for the haphazard combination of the various departments

exquisite delicacy with which they have been of stage-craft. The unity that is required of a work

fashioned. All these beautiful jewels speak for of art must be imposed by one mind. Everything

fear no comparison with any of the "trade" pro- artist. What is required is a picture in which the

ducts. And bearing in mind the very notable actor is visualised as a painter visualises a figure in

advance in the taste and quality of the jewellery his composition. The old theory of this business

years this is no empty compliment. without taking the actor into account until the last

moment, or that the scenery, upon so-called Eliza-

NORMAN WILKINSON'S DE- bethan principles, could be entirely suppressed in

CORATION OF "A MID- n's favour- Either way, the actor seemed pleased ;

SUMMER NIGHT'S DREAM" AT choosmS tne Part of a performing animal, his pre-
occupation was entirely with himself. It seems

THE SAVOY THEATRE. now more fully appreciat:ed that the finer snades of

In these days of the triumph of mechanism an the actor's art count only in a scene sensitively
immense range of effect has been made possible on prepared to assist expression and impart significance
the stage. The art of the theatre has not, however, to every movement. It is recognised that on the
kept pace with this development; nor has it been one hand scenery must not distract by its own
quite decided, except by Mr. Granville Barker, realistic triumph, or on the other hand fail the imagi-
what type of mind should control these resources— nation of the audience by its insufficiency. What is
as in their application they pass from the sphere of essential is that the mind of the audience should be

entirely released to follow
the movement of the play,
the acting taking place not
merely over against the
scenery, but within an
atmosphere prepared for it
as artfully as it is for the
characters in a first-rate
novel.

Any attempt to make the
setting too natural may
defeat itself in the highly
artificial conditions of the
stage — conditions intensi-
fied since the prevalence
of lime-light. The master
in this business, then, will
take the first step of an
artist in accepting the limi-
tations of his medium, and
from those very limitations
evolve novel beauty de-
termined by them. Every-
thing that Mr. Norman
Wilkinson has done in the
Savoy productions has
rested with such a frank
acceptance of the arti-

PRESIDENTIAL BADGE AND CHAIN FOR THE BIRMINGHAM LAW SOCIETY. DE- ficial Conditions of the

SIGNED AND EXECUTED BY ARTHUR J. AND G. C. GASKIN, ASSISTED BY W.