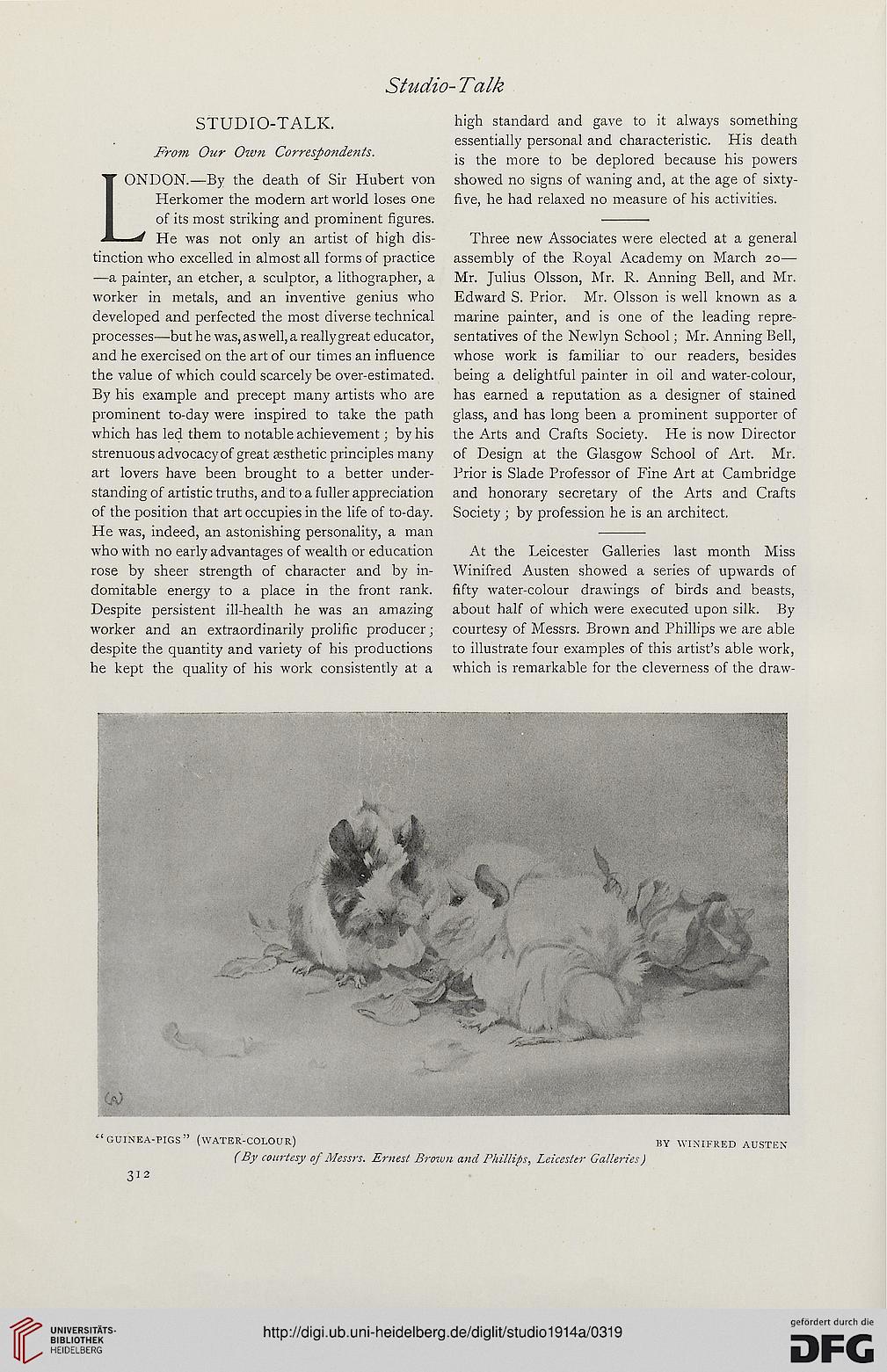 From Our Own Correspondents.

LONDON.—By the death of Sir Hubert von
Herkomer the modern art world loses one
of its most striking and prominent figures.
—' He was not only an artist of high dis-
tinction who excelled in almost all forms of practice
—a painter, an etcher, a sculptor, a lithographer, a
worker in metals, and an inventive genius who
developed and perfected the most diverse technical
processes—but he was, as well, a really great educator,
and he exercised on the art of our times an influence
the value of which could scarcely be over-estimated.
By his example and precept many artists who are
prominent to-day were inspired to take the path
which has led them to notable achievement; by his
strenuous advocacy of great assthetic principles many
art lovers have been brought to a better under-
standing of artistic truths, and to a fuller appreciation
of the position that art occupies in the life of to-day.
He was, indeed, an astonishing personality, a man
who with no early advantages of wealth or education
rose by sheer strength of character and by in-
domitable energy to a place in the front rank.
Despite persistent ill-health he was an amazing
worker and an extraordinarily prolific producer;
despite the quantity and variety of his productions
he kept the quality of his work consistently at a

high standard and gave to it always something
essentially personal and characteristic. His death
is the more to be deplored because his powers
showed no signs of waning and, at the age of sixty-
five, he had relaxed no measure of his activities.

Three new Associates were elected at a general
assembly of the Royal Academy on March 20—
Mr. Julius Olsson, Mr. R. Anning Bell, and Mr.
Edward S. Prior. Mr. Olsson is well known as a
marine painter, and is one of the leading repre-
sentatives of the Newlyn School; Mr. Anning Bell,
whose work is familiar to our readers, besides
being a delightful painter in oil and water-colour,
has earned a reputation as a designer of stained
glass, and has long been a prominent supporter of
the Arts and Crafts Society. He is now Director
of Design at the Glasgow School of Art. Mr.
Prior is Slade Professor of Fine Art at Cambridge
and honorary secretary of the Arts and Crafts
Society ; by profession he is an architect.

At the Leicester Galleries last month Miss
Winifred Austen showed a series of upwards of
fifty water-colour drawings of birds and beasts,
about half of which were executed upon silk. By
courtesy of Messrs. Brown and Phillips we are able
to illustrate four examples of this artist's able work,
which is remarkable for the cleverness of the draw-

(By courtesy of Messrs. Ernest Broiun and Phillips, Leicester Galleries)