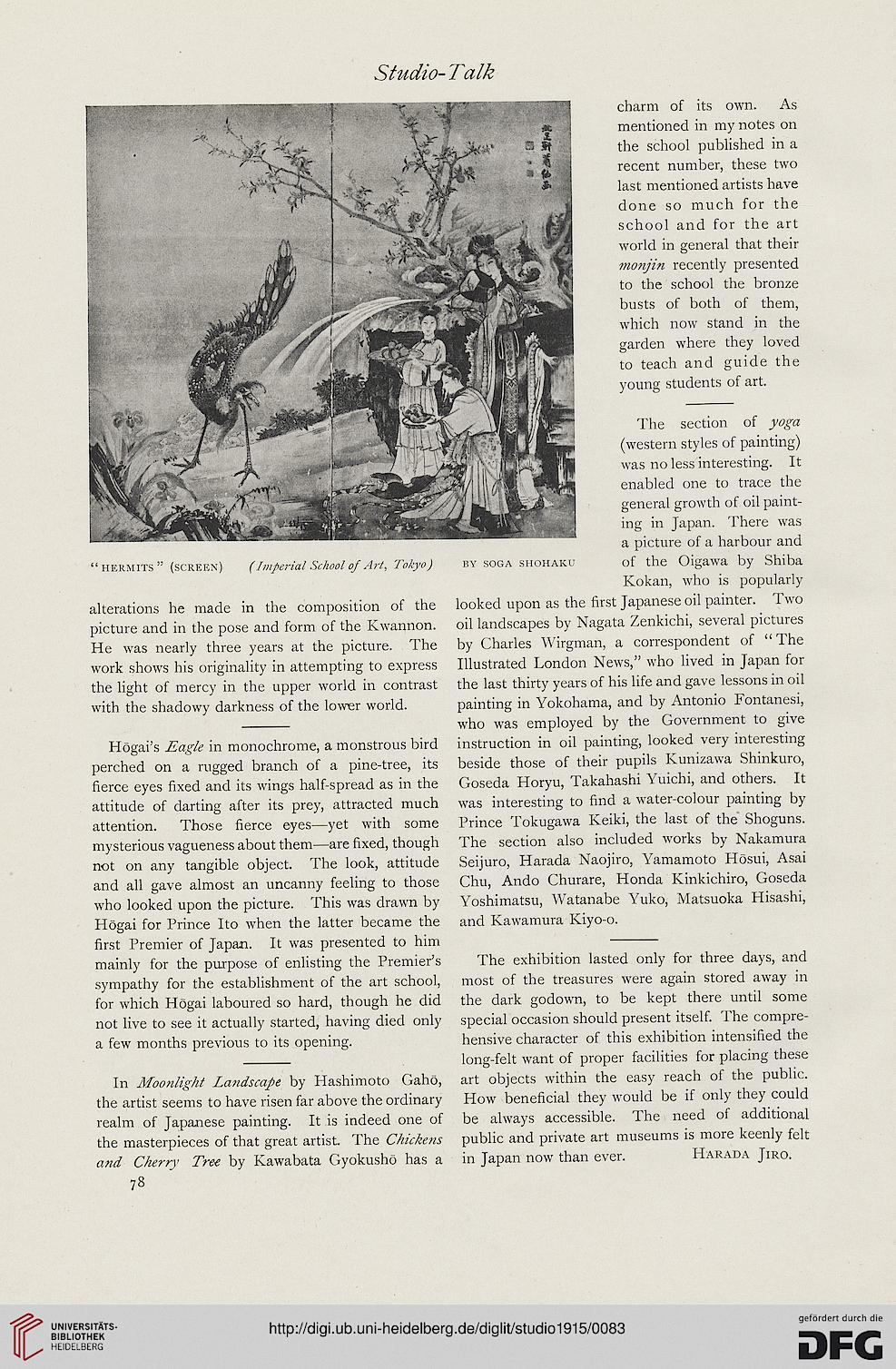 charm of its own. As
mentioned in my notes on
the school published in a
recent number, these two
last mentioned artists have
done so much for the
school and for the art
world in general that their
monjin recently presented
to the school the bronze
busts of both of them,
which now stand in the
garden where they loved
to teach and guide the
young students of art.

The section of yoga
(western styles of painting)
was no less interesting. It
enabled one to trace the
general growth of oil paint-
ing in Japan. There was
a picture of a harbour and
"hermits" (screen) (Imperial School of Art, Tokyo) by soga shohaku of the Oigawa by Shiba

Kokan, who is popularly

alterations he made in the composition of the looked upon as the first Japanese oil painter. Two
picture and in the pose and form of the Kwannon. oil landscapes by Nagata Zenkichi, several pictures
He was nearly three years at the picture. The by Charles Wirgman, a correspondent of " The
work shows his originality in attempting to express Illustrated London News," who lived in Japan for
the light of mercy in the upper world in contrast the last thirty years of his life and gave lessons in oil
with the shadowy darkness of the lower world. painting in Yokohama, and by Antonio Fontanesi,

- who was employed by the Government to give

Hogai's Eagle in monochrome, a monstrous bird instruction in oil painting, looked very interesting
perched on a rugged branch of a pine-tree, its beside those of their pupils Kunizawa Shinkuro,
fierce eyes fixed and its wings half-spread as in the Goseda Horyu, Takahashi Yuichi, and others. It
attitude of darting after its prey, attracted much was interesting to find a water-colour painting by
attention. Those fierce eyes—yet with some Prince Tokugawa Keiki, the last of the Shoguns.
mysterious vagueness about them—are fixed, though The section also included works by Nakamura
not on any tangible object. The look, attitude Seijuro, Harada Naojiro, Yamamoto Hosui, Asai
and all gave almost an uncanny feeling to those Chu, Ando Churare, Honda Kinkichiro, Goseda
who looked upon the picture. This was drawn by Yoshimatsu, Watanabe Yuko, Matsuoka Hisashi,
Hogai for Prince Ito when the latter became the and Kawamura Kiyo-o.

first Premier of Japan. It was presented to him -

mainly for the purpose of enlisting the Premier's The exhibition lasted only for three days, and

sympathy for the establishment of the art school, most of the treasures were again stored away in

for which Hogai laboured so hard, though he did the dark godown, to be kept there until some

not live to see it actually started, having died only special occasion should present itself. The compre-

a few months previous to its opening. hensive character of this exhibition intensified the

- long-felt want of proper facilities for placing these

In Moonlight Landscape by Hashimoto Gaho, art objects within the easy reach of the public,

realm of Japanese painting. It is indeed one of be always accessible. The need of additional

the masterpieces of that great artist. The Chickens public and private art museums is more keenly felt

and Cherry Tree by Kawabata Gyokusho has a in Japan now than ever. Harada Jiro.
78