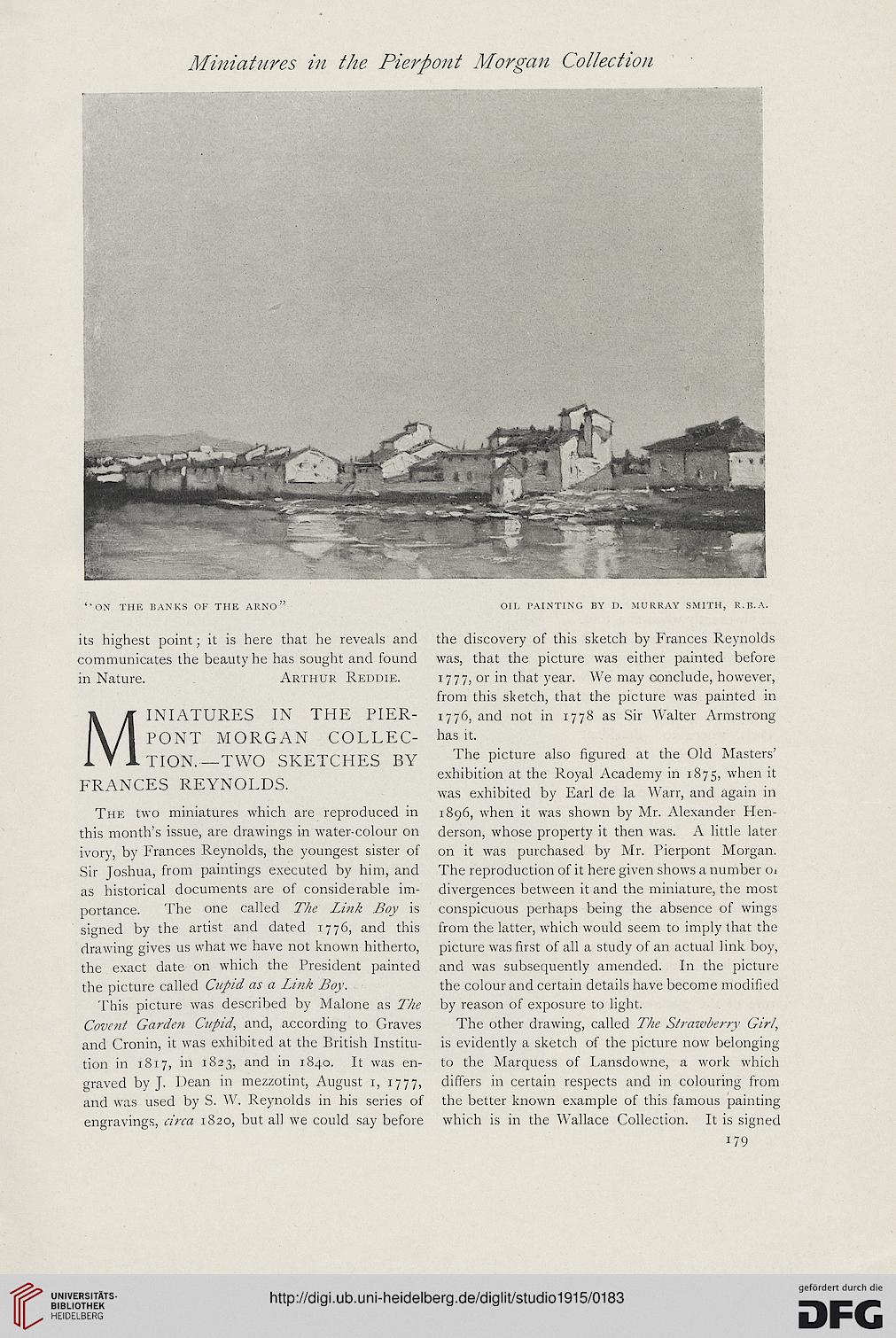 "ON THE BANKS OF THE ARNO " OIL PAINTING BY D. MURRAY SMITH, R.B.A.

its highest point; it is here that he reveals and the discovery of this sketch by Frances Reynolds
communicates the beauty he has sought and found was, that the picture was either painted before
in Nature. Arthur Reddie. 1777, or in that year. We may oonclude, however,

from this sketch, that the picture was painted in
INIATURES IN THE PIER- 1776, and not in 1778 as Sir Walter Armstrong
PONT MORGAN COLLEC- has it.

exhibition at the Royal Academy in 1875, when it
was exhibited by Earl de la Warr, and again in

The two miniatures which are reproduced in 1896, when it was shown by Mr. Alexander Hen-

this month's issue, are drawings in water-colour on derson, whose property it then was. A little later

ivory, by Frances Reynolds, the youngest sister of on it was purchased by Mr. Pierpont Morgan.

Sir Joshua, from paintings executed by him, and The reproduction of it here given shows a number 01

as historical documents are of considerable im- divergences between it and the miniature, the most

portance. The one called The Link Boy is conspicuous perhaps being the absence of wings

signed by the artist and dated 1776, and this from the latter, which would seem to imply that the

drawing gives us what we have not known hitherto, picture was first of all a study of an actual link boy,

the exact date on which the President painted and was subsequently amended. In the picture

the picture called Cupid as a Link Boy. the colour and certain details have become modified

This picture was described by Malone as Tlie by reason of exposure to light.
Coveni Garden Cupid, and, according to Graves The other drawing, called The Strawberry Girl,

and Cronin, it was exhibited at the British Institu- is evidently a sketch of the picture now belonging

graved by J. Dean in mezzotint, August 1, 1777, differs in certain respects and in colouring from

and was used by S. W. Reynolds in his series of the better known example of this famous painting

engravings, circa 1820, but all we could say before which is in the Wallace Collection. It is signed