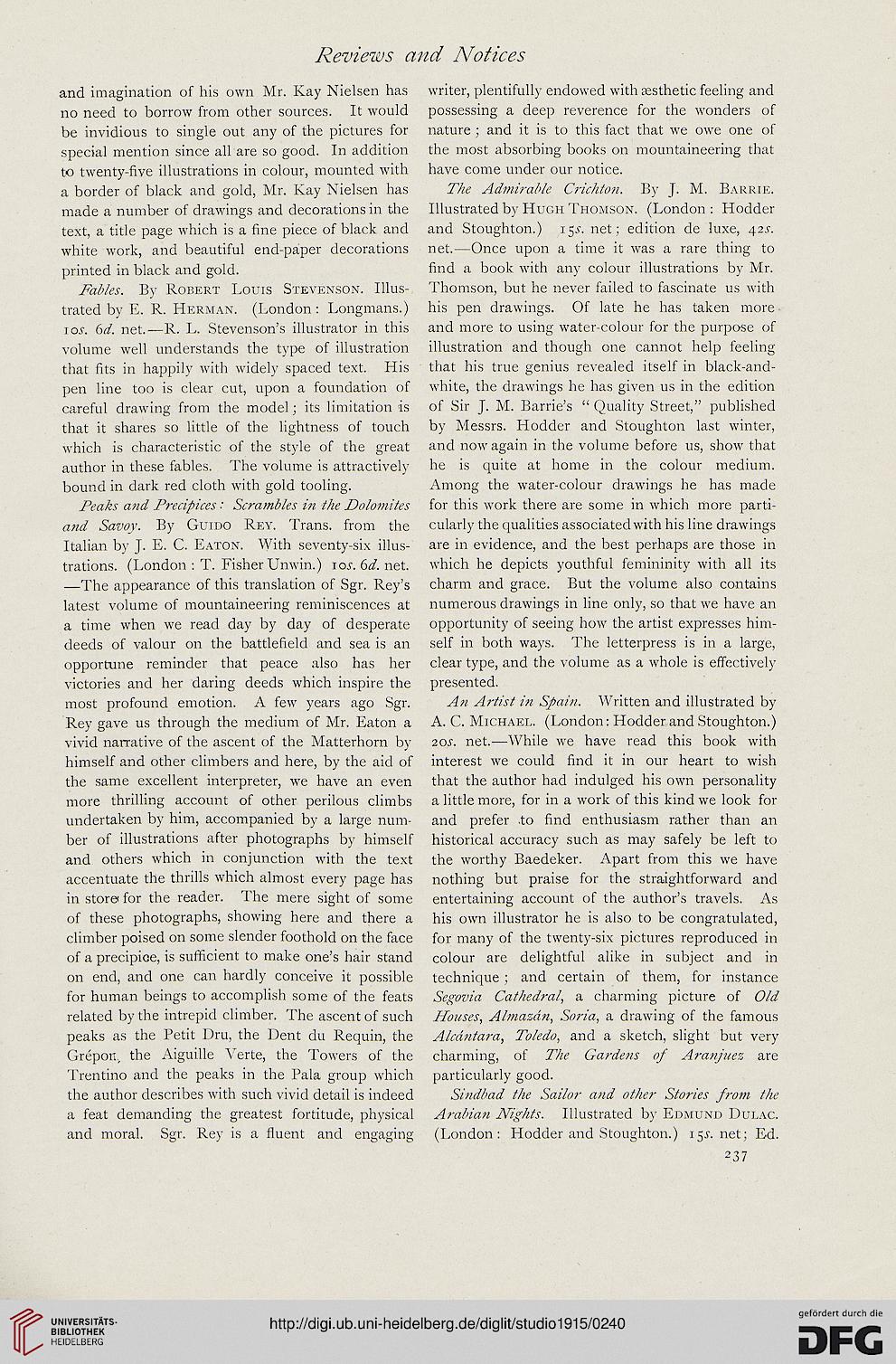 and imagination of his own Mr. Kay Nielsen has
no need to borrow from other sources. It would
be invidious to single out any of the pictures for
special mention since all are so good. In addition
to twenty-five illustrations in colour, mounted with
a border of black and gold, Mr. Kay Nielsen has
made a number of drawings and decorations in the
text, a title page which is a fine piece of black and
white work, and beautiful end-paper decorations
printed in black and gold.

Fables. By Robert Louis Stevenson. Illus-
trated by E. R. Herman. (London : Longmans.)
\os. 6d. net.—R. L. Stevenson's illustrator in this
volume well understands the type of illustration
that fits in happily with widely spaced text. His
pen line too is clear cut, upon a foundation of
careful drawing from the model; its limitation is
that it shares so little of the lightness of touch
which is characteristic of the style of the great
author in these fables. The volume is attractively
bound in dark red cloth with gold tooling.

Peaks and Precipices: Scrambles in the Dolomites
and Savoy. By Guido Rey. Trans, from the
Italian by J. E. C. Eaton. With seventy-six illus-
trations. (London : T. Fisher Unwin.) ioj. 6d. net.
—The appearance of this translation of Sgr. Rey's
latest volume of mountaineering reminiscences at
a time when we read day by day of desperate
deeds of valour on the battlefield and sea is an
opportune reminder that peace also has her
victories and her daring deeds which inspire the
most profound emotion. A few years ago Sgr.
Rey gave us through the medium of Mr. Eaton a
vivid narrative of the ascent of the Matterhorn by
himself and other climbers and here, by the aid of
the same excellent interpreter, we have an even
more thrilling account of other perilous climbs
undertaken by him, accompanied by a large num-
ber of illustrations after photographs by himself
and others which in conjunction with the text
accentuate the thrills which almost every page has
in store* for the reader. The mere sight of some
of these photographs, showing here and there a
climber poised on some slender foothold on the face
of a precipice, is sufficient to make one's hair stand
on end, and one can hardly conceive it possible
for human beings to accomplish some of the feats
related by the intrepid climber. The ascent of such
peaks as the Petit Dru, the Dent du Requin, the
Grepon., the Aiguille Verte, the Towers of the
Trentino and the peaks in the Pala group which
the author describes with such vivid detail is indeed
a feat demanding the greatest fortitude, physical
and moral. Sgr. Rey is a fluent and engaging

writer, plentifully endowed with aesthetic feeling and
possessing a deep reverence for the wonders of
nature ; and it is to this fact that we owe one of
the most absorbing books on mountaineering that
have come under our notice.

The Admirable Crichton. By J. M. Barrie.
Illustrated by Hugh Thomson. (London : Hodder
and Stoughton.) 15.c net; edition de luxe, 425.
net.—Once upon a time it was a rare thing to
find a book with any colour illustrations by Mr.
Thomson, but he never failed to fascinate us with
his pen drawings. Of late he has taken more
and more to using water-colour for the purpose of
illustration and though one cannot help feeling
that his true genius revealed itself in black-and-
white, the drawings he has given us in the edition
of Sir J. M. Barrie's " Quality Street," published
by Messrs. Hodder and Stoughton last winter,
and now again in the volume before us, show that
he is quite at home in the colour medium.
Among the water-colour drawings he has made
for this work there are some in which more parti-
cularly the qualities associated with his line drawings
are in evidence, and the best perhaps are those in
which he depicts youthful femininity with all its
charm and grace. But the volume also contains
numerous drawings in line only, so that we have an
opportunity of seeing how the artist expresses him-
self in both ways. The letterpress is in a large,
clear type, and the volume as a whole is effectively
presented.

An Artist in Spain. Written and illustrated by
A. C. Michael. (London: Hodder and Stoughton.)
20s. net.—While we have read this book with
interest we could find it in our heart to wish
that the author had indulged his own personality
a little more, for in a work of this kind we look for
and prefer .to find enthusiasm rather than an
historical accuracy such as may safely be left to
the worthy Baedeker. Apart from this we have
nothing but praise for the straightforward arid
entertaining account of the author's travels. As
his own illustrator he is also to be congratulated,
for many of the twenty-six pictures reproduced in
colour are delightful alike in subject and in
technique ; and certain of them, for instance
Segovia Cathedral, a charming picture of Old
Houses, Almazdn, Soria, a drawing of the famous
Alcantara, Toledo, and a sketch, slight but very
charming, of The Gardens of Aranjuez are
particularly good.

Sindbad the Sailor and other Stories from the
Arabian Nights. Illustrated by Edmund Dulac.
(London: Hodder and Stoughton.) 15j-.net; Ed.