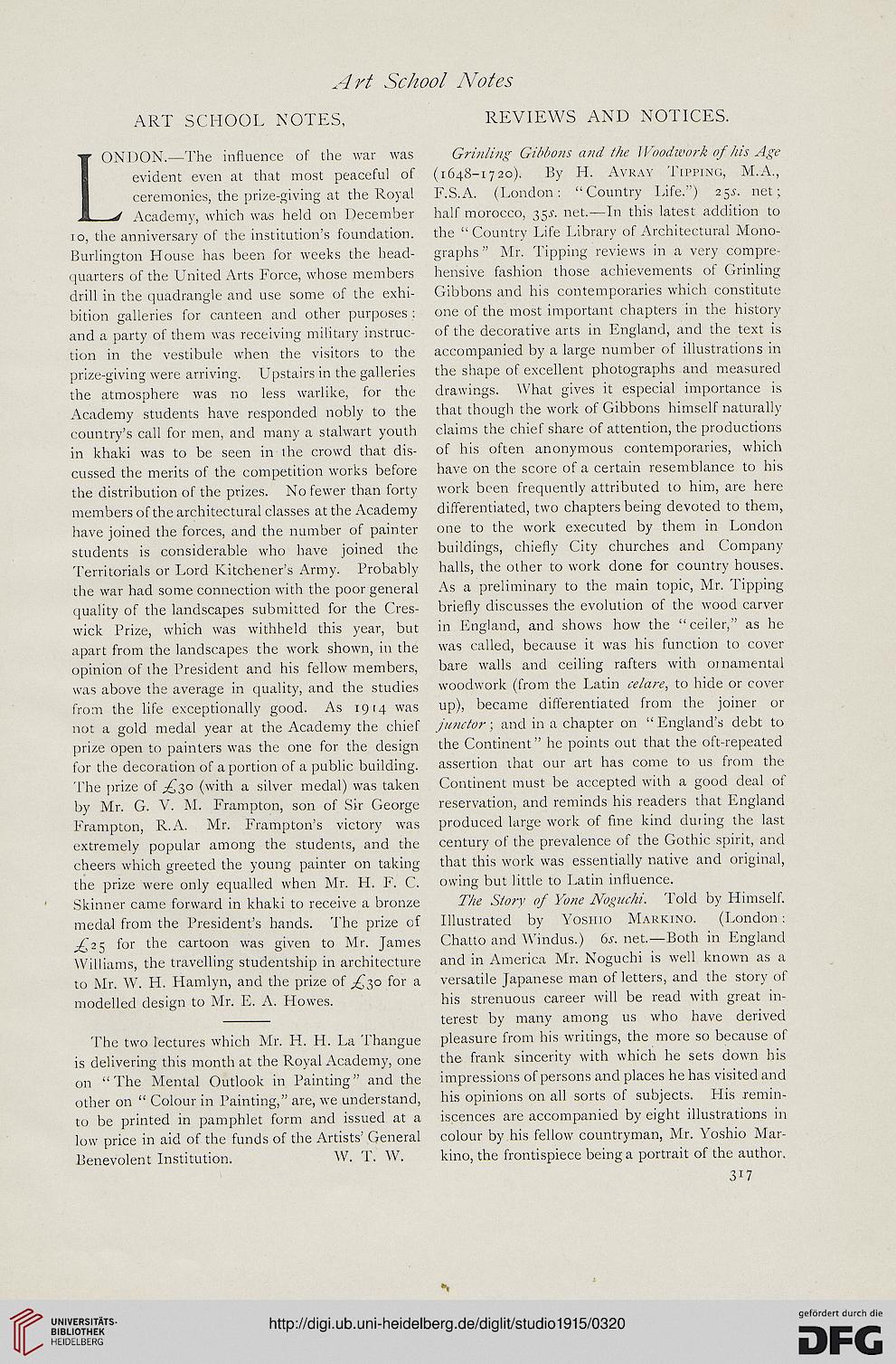 LONDON.—The influence of the war was
evident even at that most peaceful of
ceremonies, the prize-giving at the Royal
-> Academy, which was held on December
10, the anniversary of the institution's foundation.
Burlington House has been for weeks the head-
quarters of the United Arts Force, whose members
drill in the quadrangle and use some of the exhi-
bition galleries for canteen and other purposes :
and a party of them was receiving military instruc-
tion in the vestibule when the visitors to the
prize-giving were arriving. Upstairs in the galleries
the atmosphere was no less warlike, for the
Academy students have responded nobly to the
country's call for men, and many a stalwart youth
in khaki was to be seen in ihe crowd that dis-
cussed the merits of the competition works before
the distribution of the prizes. No fewer than forty
members of the architectural classes at the Academy
have joined the forces, and the number of painter
students is considerable who have joined the
Territorials or Lord Kitchener's Army. Probably
the war had some connection with the poor general
quality of the landscapes submitted for the Cres-
wick Prize, which was withheld this year, but
apart from the landscapes the work shown, in the
opinion of the President and his fellow members,
was above the average in quality, and the studies
from the life exceptionally good. As 1914 was
not a gold medal year at the Academy the chief
prize open to painters was the one for the design
for the decoration of a portion of a public building.
The prize of ^30 (with a silver medal) was taken
by Mr. G. V. M. Frampton, son of Sir George
Frampton, R.A. Mr. Frampton's victory was
extremely popular among the students, and the
cheers which greeted the young painter on taking
the prize were only equalled when Mr. H. F. C.
Skinner came forward in khaki to receive a bronze
medal from the President's hands. The prize of
,£25 for the cartoon was given to Mr. James
Williams, the travelling studentship in architecture
to Mr. W. H. Hamlyn, and the prize of ,£30 for a
modelled design to Mr. E. A. Howes.

The two lectures which Mr. H. H. La Thangue
is delivering this month at the Royal Academy, one
on "The Mental Outlook in Painting" and the
other on " Colour in Painting," are, we understand,
to be printed in pamphlet form and issued at a
low price in aid of the funds of the Artists' General
Benevolent Institution. W. T. W.

Grinling Gibbons and the Woodwork of his Age
(1648-17 20). By H. Avray Tipping, M.A.,
F.S.A. (London: "Country Life.") 255. net;
half morocco, 35J. net.—In this latest addition to
the " Country Life Library of Architectural Mono-
graphs " Mr. Tipping reviews in a very compre-
hensive fashion those achievements of Grinling
Gibbons and his contemporaries which constitute
one of the most important chapters in the history
of the decorative arts in England, and the text is
accompanied by a large number of illustrations in
the shape of excellent photographs and measured
drawings. What gives it especial importance is
that though the work of Gibbons himself naturally
claims the chief share of attention, the productions
of his often anonymous contemporaries, which
have on the score of a certain resemblance to his
work been frequently attributed to him, are here
differentiated, two chapters being devoted to them,
one to the work executed by them in London
buildings, chiefly City churches and Company
halls, the other to work done for country houses.
As a preliminary to the main topic, Mr. Tipping
briefly discusses the evolution of the wood carver
in England, and shows how the "ceiler," as he
was called, because it was his function to cover
bare walls and ceiling rafters with ornamental
woodwork (from the Latin celare, to hide or cover
up), became differentiated from the joiner or
junctor; and in a chapter on " England's debt to
the Continent" he points out that the oft-repeated
assertion that our art has come to us from the
Continent must be accepted with a good deal of
reservation, and reminds his readers that England
produced large work of fine kind duiing the last
century of the prevalence of the Gothic spirit, and
that this work was essentially native and original,
owing but little to Latin influence.

The Story of Yone Noguchi. Told by Himself.
Illustrated by YOSHIO Markino. (London :
Chatto and Windus.) 6s. net.—Both in England
and in America Mr. Noguchi is well known as a
versatile Japanese man of letters, and the story of
his strenuous career will be read with great in-
terest by many among us who have derived
pleasure from his writings, the more so because of
the frank sincerity with which he sets down his
impressions of persons and places he has visited and
his opinions on all sorts of subjects. His remin-
iscences are accompanied by eight illustrations in
colour by his fellow countryman, Mr. Yoshio Mar-
kino, the frontispiece being a portrait of the author.