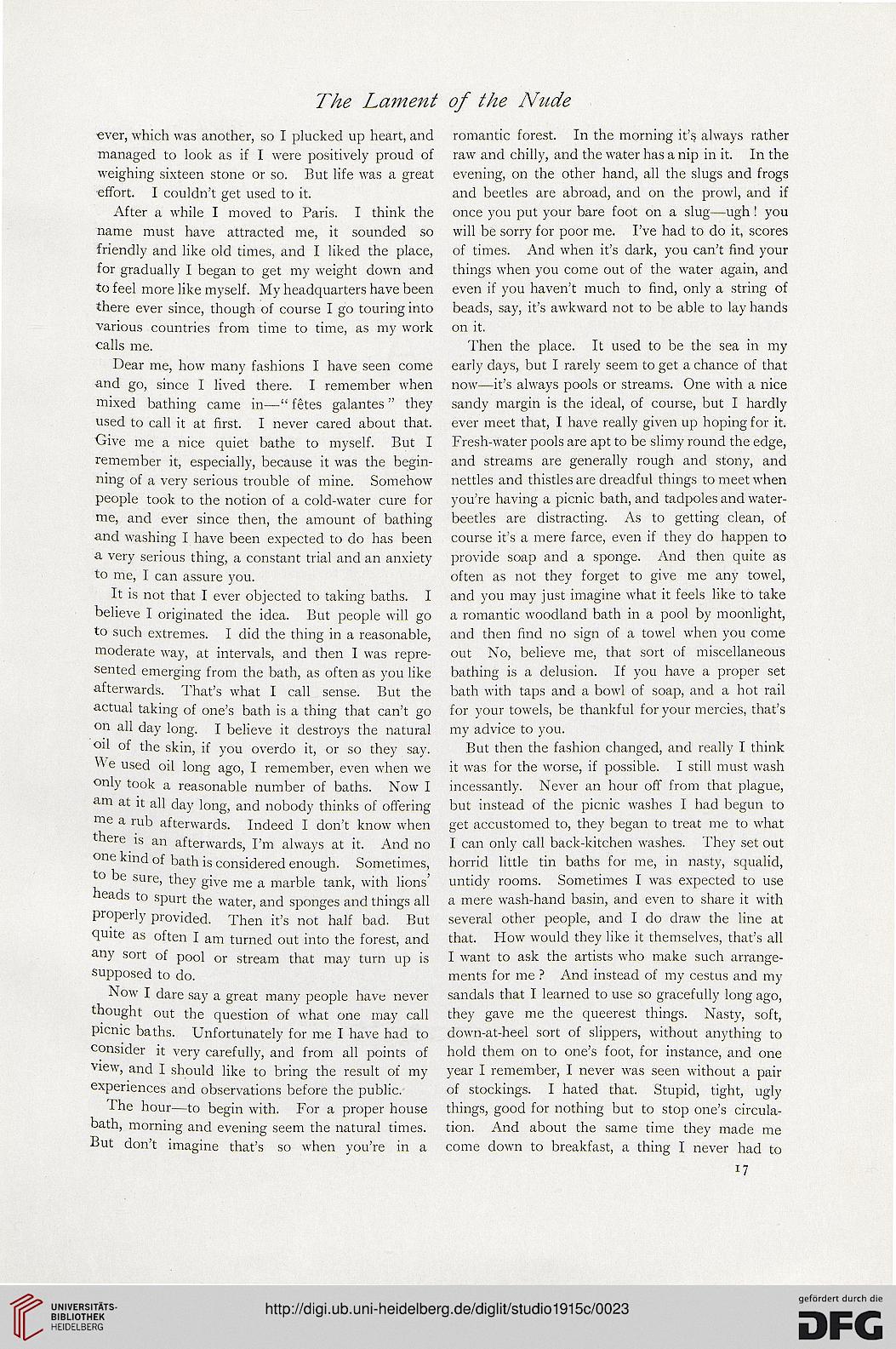 Information about OCR text
The Lament of the Nude

ever, which was another, so I plucked up heart, and
managed to look as if I were positively proud of
weighing sixteen stone or so. But life was a great
effort. I couldn’t get used to it.

After a while I moved to Paris. I think the
name must have attracted me, it sounded so
friendly and like old times, and I liked the place,
for gradually I began to get my weight down and
to feel more like myself. My headquarters have been
there ever since, though of course I go touring into
various countries from time to time, as my work
calls me.

Dear me, how many fashions I have seen come
and go, since I lived there. I remember when
mixed bathing came in—“ fetes galantes ” they
used to call it at first. I never cared about that.
Give me a nice quiet bathe to myself. But I
remember it, especially, because it was the begin-
ning of a very serious trouble of mine. Somehow
people took to the notion of a cold-water cure for
me, and ever since then, the amount of bathing
and washing I have been expected to do has been
a very serious thing, a constant trial and an anxiety
to me, I can assure you.

It is not that I ever objected to taking baths. I
believe I originated the idea. But people will go
to such extremes. I did the thing in a reasonable,
moderate way, at intervals, and then I was repre-
sented emerging from the bath, as often as you like
afterwards. That’s what I call sense. But the
actual taking of one’s bath is a thing that can’t go
on all day long. I believe it destroys the natural
oil of the skin, if you overdo it, or so they say.
We used oil long ago, I remember, even when we
only took a reasonable number of baths. Now I
am at it all day long, and nobody thinks of offering
me a rub afterwards. Indeed I don’t know when
there is an afterwards, I’m always at it. And no
one kind of bath is considered enough. Sometimes,
to be sure, they give me a marble tank, with lions’
heads to spurt the water, and sponges and things all
properly provided. Then it’s not half bad. But
quite as often I am turned out into the forest, and
any sort of pool or stream that may turn up is
supposed to do.

Now I dare say a great many people have never
thought out the question of what one may call
picnic baths. Unfortunately for me I have had to
consider it very carefully, and from all points of
view, and I should like to bring the result of my
experiences and observations before the public.

The hour—to begin with. For a proper house
bath, morning and evening seem the natural times.
But don’t imagine that’s so when you’re in a

romantic forest. In the morning it’§ always rather
raw and chilly, and the water has a nip in it. In the
evening, on the other hand, all the slugs and frogs
and beetles are abroad, and on the prowl, and if
once you put your bare foot on a slug—ugh ! you
will be sorry for poor me. I’ve had to do it, scores
of times. And when it’s dark, you can’t find your
things when you come out of the water again, and
even if you haven’t much to find, only a string of
beads, say, it’s awkward not to be able to lay hands
on it.

Then the place. It used to be the sea in my
early days, but I rarely seem to get a chance of that
now—it’s always pools or streams. One with a nice
sandy margin is the ideal, of course, but I hardly
ever meet that, I have really given up hoping for it.
Fresh-water pools are apt to be slimy round the edge,
and streams are generally rough and stony, and
nettles and thistles are dreadful things to meet when
you’re having a picnic bath, and tadpoles and water-
beetles are distracting. As to getting clean, of
course it’s a mere farce, even if they do happen to
provide soap and a sponge. And then quite as
often as not they forget to give me any towel,
and you may just imagine what it feels like to take
a romantic woodland bath in a pool by moonlight,
and then find no sign of a towel when you come
out No, believe me, that sort of miscellaneous
bathing is a delusion. If you have a proper set
bath with taps and a bowl of soap, and a hot rail
for your towels, be thankful for your mercies, that’s
my advice to you.

But then the fashion changed, and really I think
it was for the worse, if possible. I still must wash
incessantly. Never an hour off from that plague,
but instead of the picnic washes I had begun to
get accustomed to, they began to treat me to what
I can only call back-kitchen washes. They set out
horrid little tin baths for me, in nasty, squalid,
untidy rooms. Sometimes I was expected to use
a mere wash-hand basin, and even to share it with
several other people, and I do draw the line at
that. How would they like it themselves, that’s all
I want to ask the artists who make such arrange-
ments for me ? And instead of my cestus and my
sandals that I learned to use so gracefully long ago,
they gave me the queerest things. Nasty, soft,
down-at-heel sort of slippers, without anything to
hold them on to one’s foot, for instance, and one
year I remember, I never was seen without a pair
of stockings. I hated that. Stupid, tight, ugly
things, good for nothing but to stop one’s circula-
tion. And about the same time they made me
come down to breakfast, a thing I never had to