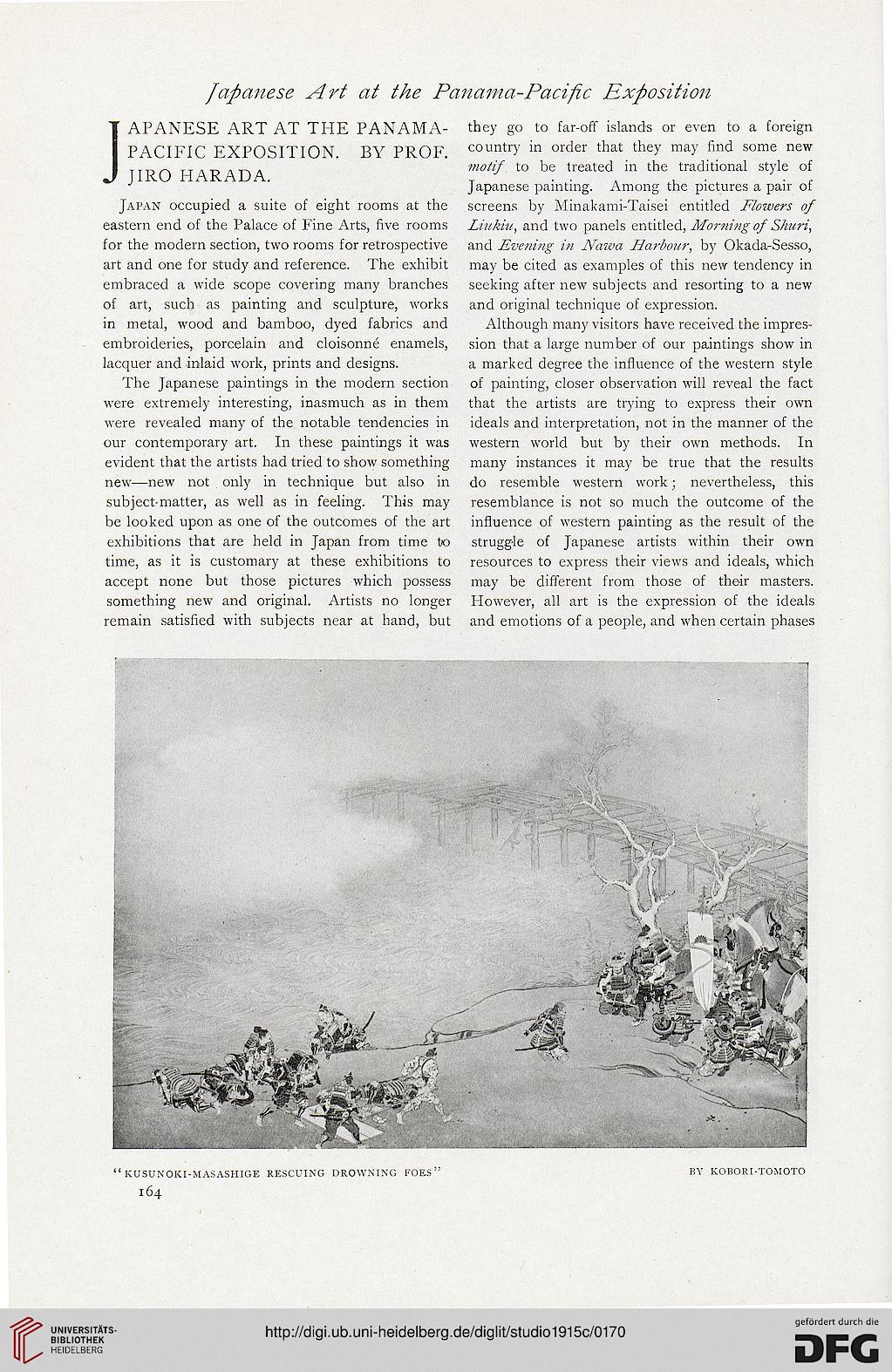 Information about OCR text
Japanese Art at the Panama-Pacipc Exposition

Japan occupied a suite of eight rooms at the
eastern end of the Palace of Fine Arts, five rooms
for the modern section, two rooms for retrospective
art and one for study and reference. The exhibit
embraced a wide scope covering many branches
of art, such as painting and sculpture, works
in metal, wood and bamboo, dyed fabrics and
embroideries, porcelain and cloisonne enamels,
lacquer and in-laid work, prints and designs.

The Japanese paintings in the modern section
were extremely interesting, inasmuch as in them
were revealed many of the notable tendencies in
our contemporary art. In these paintings it was
evident that the artists had tried to show something
new—new not only in technique but also in
subject-matter, as well as in feeling. This may
be looked upon as one of the outcomes of the art
exhibitions that are held in Japan from time to
time, as it is customary at these exhibitions to
accept none but those pictures which possess
something new and original. Artists no longer
remain satisfied with subjects near at hand, but

they go to far-off islands or even to a foreign
country in order that they may find some new
motif to be treated in the traditional style of
Japanese painting. Among the pictures a pair of
screens by Minakami-Taisei entitled Flowers of
Liukiu, and two panels entitled, Morning of Shuri,
and Evening in Nawa Harbour, by Okada-Sesso,
may be cited as examples of this new tendency in
seeking after new subjects and resorting to a new
and original technique of expression.

Although many visitors have received the impres-
sion that a large number of our paintings show in
a marked degree the influence of the western style
of painting, closer observation will reveal the fact
that the artists are trying to express their own
ideals and interpretation, not in the manner of the
western world but by their own methods. In
many instances it may be true that the results
do resemble western work; nevertheless, this
resemblance is not so much the outcome of the
influence of western painting as the result of the
struggle of Japanese artists within their own
resources to express their views and ideals, which
may be different from those of their masters.
However, all art is the expression of the ideals
and emotions of a people, and when certain phases