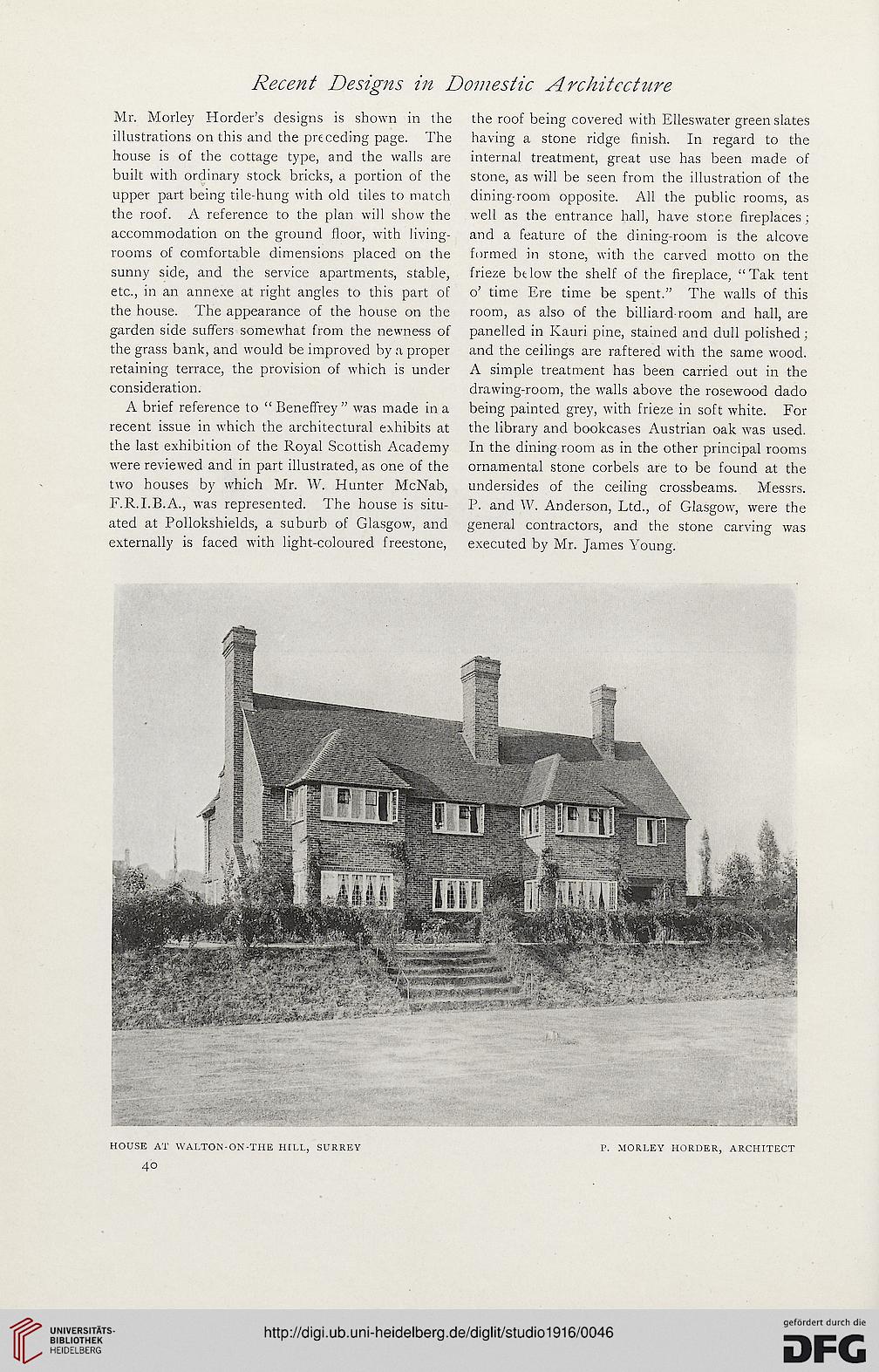 Mr. Morley Horder’s designs is shown in the
illustrations on this and the preceding page. The
house is of the cottage type, and the walls are
built with ordinary stock bricks, a portion of the
upper part being tile-hung with old tiles to match
the roof. A reference to the plan will show the
accommodation on the ground floor, with living-
rooms of comfortable dimensions placed on the
sunny side, and the service apartments, stable,
etc., in an annexe at right angles to this part of
the house. The appearance of the house on the
garden side suffers somewhat from the newness of
the grass bank, and would be improved by a proper
retaining terrace, the provision of which is under
consideration.

A brief reference to “ Beneffrey ” was made in a
recent issue in which the architectural exhibits at
the last exhibition of the Royal Scottish Academy
were reviewed and in part illustrated, as one of the
two houses by which Mr. W. Hunter McNab,
F.R.I.B.A., was represented. The house is situ-
ated at Pollokshields, a suburb of Glasgow, and
externally is faced with light-coloured freestone,

the roof being covered with Elleswater green slates
having a stone ridge finish. In regard to the
internal treatment, great use has been made of
stone, as will be seen from the illustration of the
dining-room opposite. All the public rooms, as
well as the entrance hall, have stor.e fireplaces;
and a feature of the dining-room is the alcove
formed in stone, with the carved motto on the
frieze bt low the shelf of the fireplace, “Tak tent
o’ time Ere time be spent.” The walls of this
room, as also of the billiard room and hall, are
panelled in Kauri pine, stained and dull polished;
and the ceilings are raftered with the same wood.
A simple treatment has been carried out in the
drawing-room, the walls above the rosewood dado
being painted grey, with frieze in soft white. For
the library and bookcases Austrian oak was used.
In the dining room as in the other principal rooms
ornamental stone corbels are to be found at the
undersides of the ceiling crossbeams. Messrs.
P. and W. Anderson, Ltd., of Glasgow, were the
general contractors, and the stone carving was
executed by Mr. James Young.