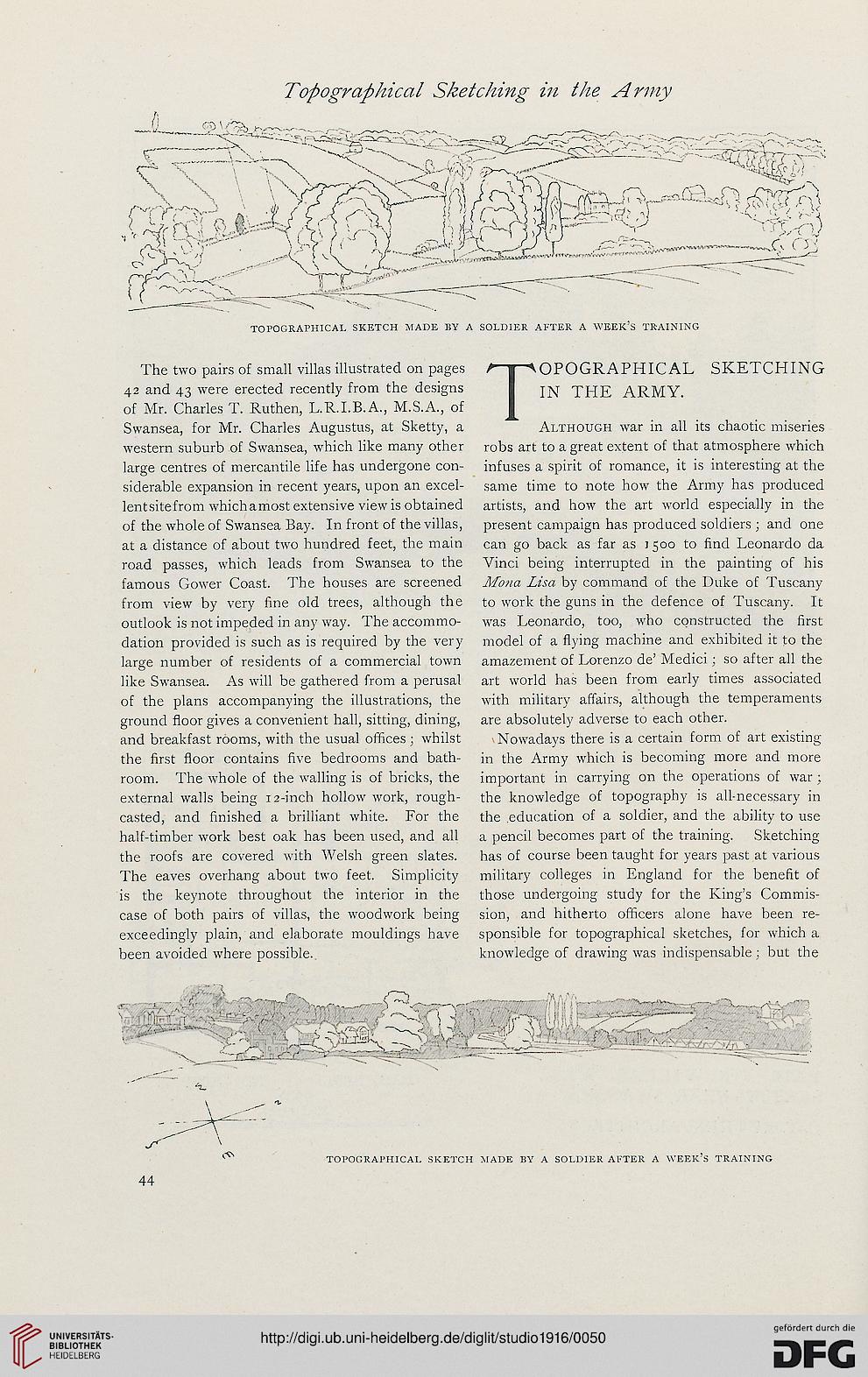 The two pairs of small villas illustrated on pages
42 and 43 were erected recently from the designs
of Mr. Charles T. Ruthen, L.R.I.B.A., M.S.A., of
Swansea, for Mr. Charles Augustus, at Sketty, a
western suburb of Swansea, which like many other
large centres of mercantile life has undergone con-
siderable expansion in recent years, upon an excel-
lentsitefrom whichamost extensive view is obtained
of the whole of Swansea Bay. In front of the villas,
at a distance of about two hundred feet, the main
road passes, which leads from Swansea to the
famous Gower Coast. The houses are screened
from view by very fine old trees, although the
outlook is not impeded in any way. The accommo-
dation provided is such as is required by the very
large number of residents of a commercial town
like Swansea. As will be gathered from a perusal
of the plans accompanying the illustrations, the
ground floor gives a convenient hall, sitting, dining,
and breakfast rooms, with the usual offices; whilst
the first floor contains five bedrooms and bath-
room. The whole of the walling is of bricks, the
external walls being 12-inch hollow work, rough-
casted, and finished a brilliant white. For the
half-timber work best oak has been used, and all
the roofs are covered with Welsh green slates.
The eaves overhang about two feet. Simplicity
is the keynote throughout the interior in the
case of both pairs of villas, the woodwork being
exceedingly plain, and elaborate mouldings have
been avoided where possible.

Although war in all its chaotic miseries
robs art to a great extent of that atmosphere which
infuses a spirit of romance, it is interesting at the
same time to note how the Army has produced
artists, and how the art world especially in the
present campaign has produced soldiers ; and one
can go back as far as 1 500 to find Leonardo da
Vinci being interrupted in the painting of his
Mo?ia Lisa by command of the Duke of Tuscany
to work the guns in the defence of Tuscany. It
was Leonardo, too, who constructed the first
model of a flying machine and exhibited it to the
amazement of Lorenzo de’ Medici; so after all the
art world has been from early times associated
with military affairs, although the temperaments
are absolutely adverse to each other.

Nowadays there is a certain form of art existing
in the Army which is becoming more and more
important in carrying on the operations of war;
the knowledge of topography is all-necessary in
the education of a soldier, and the ability to use
a pencil becomes part of the training. Sketching
has of course been taught for years past at various
military colleges in England for the benefit of
those undergoing study for the King’s Commis-
sion, and hitherto officers alone have been re-
sponsible for topographical sketches, for which a
knowledge of drawing was indispensable; but the