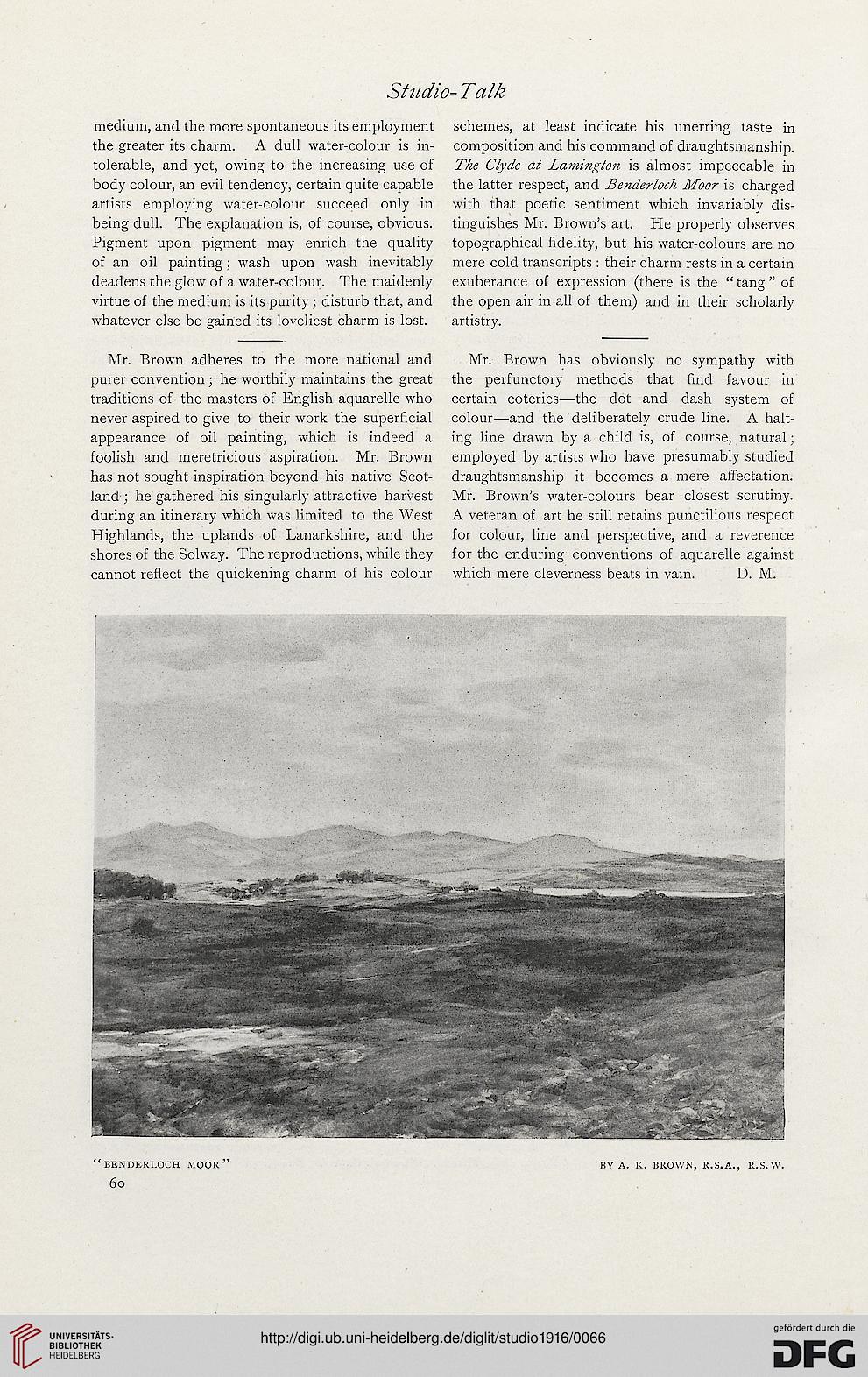 medium, and the more spontaneous its employment
the greater its charm. A dull water-colour is in-
tolerable, and yet, owing to the increasing use of
body colour, an evil tendency, certain quite capable
artists employing water-colour succeed only in
being dull. The explanation is, of course, obvious.
Pigment upon pigment may enrich the quality
of an oil painting; wash upon wash inevitably
deadens the glow of a water-colour. The maidenly
virtue of the medium is its purity; disturb that, and
whatever else be gained its loveliest charm is lost.

Mr. Brown adheres to the more national and
purer convention ; he worthily maintains the great
traditions of the masters of English aquarelle who
never aspired to give to their work the superficial
appearance of oil painting, which is indeed a
foolish and meretricious aspiration. Mr. Brown
has not sought inspiration beyond his native Scot-
land ; he gathered his singularly attractive harvest
during an itinerary which was limited to the West
Highlands, the uplands of Lanarkshire, and the
shores of the Solway. The reproductions, while they
cannot reflect the quickening charm of his colour

schemes, at least indicate his unerring taste in
composition and his command of draughtsmanship.
The Clyde at Lamington is almost impeccable in
the latter respect, and Benderloch Moor is charged
with that poetic sentiment which invariably dis-
tinguishes Mr. Brown’s art. He properly observes
topographical fidelity, but his water-colours are no
mere cold transcripts : their charm rests in a certain
exuberance of expression (there is the “ tang ” of
the open air in all of them) and in their scholarly
artistry.

Mr. Brown has obviously no sympathy with
the perfunctory methods that find favour in
certain coteries—the dot and dash system of
colour—and the deliberately crude line. A halt-
ing line drawn by a child is, of course, natural;
employed by artists who have presumably studied
draughtsmanship it becomes a mere affectation.
Mr. Brown’s water-colours bear closest scrutiny.
A veteran of art he still retains punctilious respect
for colour, line and perspective, and a reverence
for the enduring conventions of aquarelle against
which mere cleverness beats in vain. D. M.