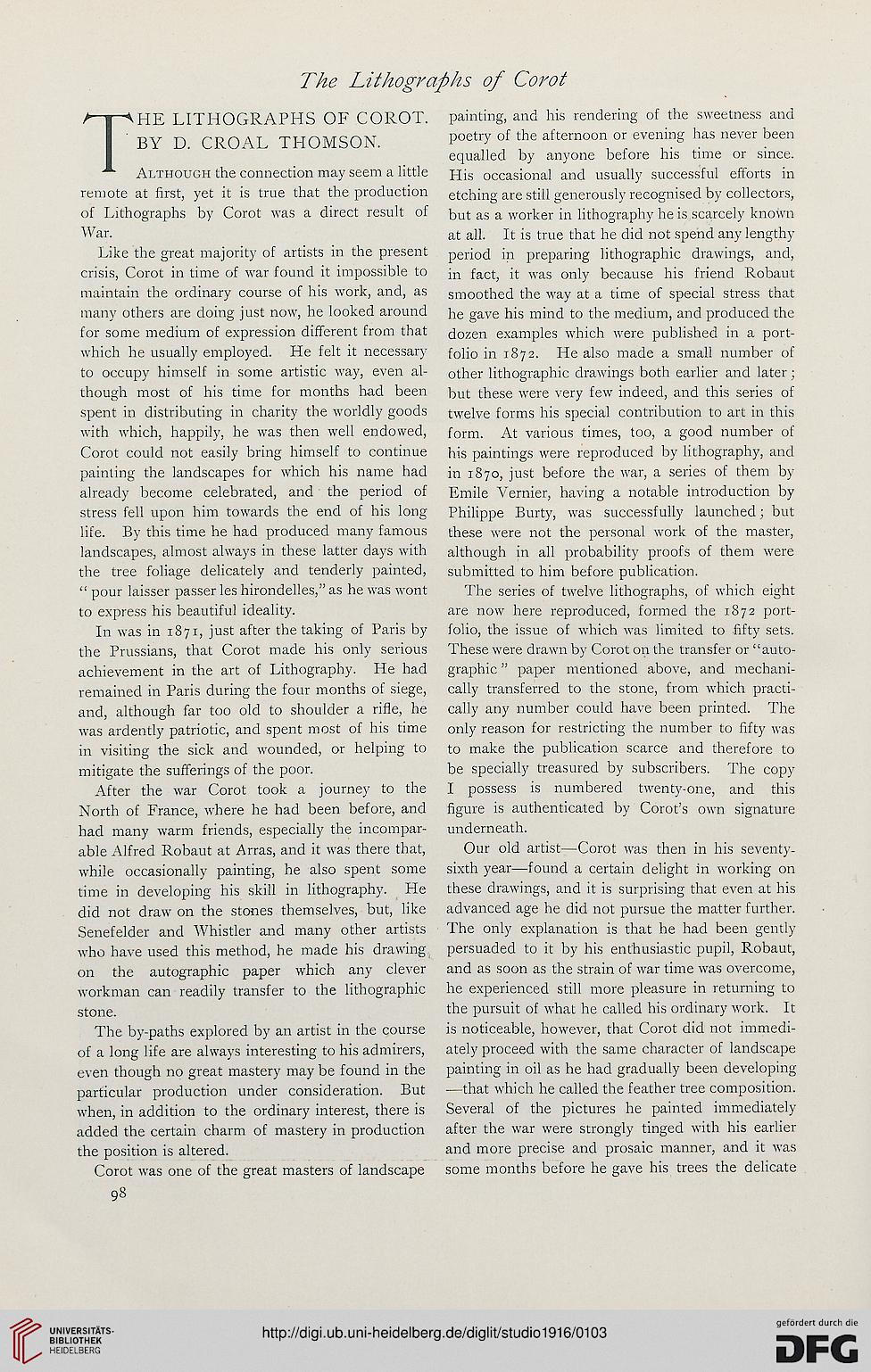 Information about OCR text
The Lithographs of Corot

HE LITHOGRAPHS OF COROT.
BY D. CROAL THOMSON.

Although the connection may seem a little
remote at first, yet it is true that the production
of Lithographs by Corot was a direct result of
War.

Like the great majority of artists in the present
crisis, Corot in time of war found it impossible to
maintain the ordinary course of his work, and, as
many others are doing just now, he looked around
for some medium of expression different from that
which he usually employed. He felt it necessary
to occupy himself in some artistic way, even al-
though most of his time for months had been
spent in distributing in charity the worldly goods
with which, happily, he was then well endowed,
Corot could not easily bring himself to continue
painting the landscapes for which his name had
already become celebrated, and the period of
stress fell upon him towards the end of his long
life. By this time he had produced many famous
landscapes, almost always in these latter days with
the tree foliage delicately and tenderly painted,
“ pour laisser passer les hirondelles,” as he was wont
to express his beautiful ideality.

In was in 1871, just after the taking of Paris by
the Prussians, that Corot made his only serious
achievement in the art of Lithography. He had
remained in Paris during the four months of siege,
and, although far too old to shoulder a rifle, he
was ardently patriotic, and spent most of his time
in visiting the sick and wounded, or helping to
mitigate the sufferings of the poor.

After the war Corot took a journey to the
North of France, where he had been before, and
had many warm friends, especially the incompar-
able Alfred Robaut at Arras, and it was there that,
while occasionally painting, he also spent some
time in developing his skill in lithography. He
did not draw on the stones themselves, but, like
Senefelder and Whistler and many other artists
who have used this method, he made his drawing
on the autographic paper which any clever
workman can readily transfer to the lithographic
stone.

The by-paths explored by an artist in the course
of a long life are always interesting to his admirers,
even though no great mastery may be found in the
particular production under consideration. But
when, in addition to the ordinary interest, there is
added the certain charm of mastery in production
the position is altered.

Corot was one of the great masters of landscape
98

painting, and his rendering of the sweetness and
poetry of the afternoon or evening has never been
equalled by anyone before his time or since.
His occasional and usually successful efforts in
etching are still generously recognised by collectors,
but as a worker in lithography he is scarcely known
at all. It is true that he did not spend any lengthy
period in preparing lithographic drawings, and,
in fact, it was only because his friend Robaut
smoothed the way at a time of special stress that
he gave his mind to the medium, and produced the
dozen examples which were published in a port-
folio in 1872. He also made a small number of
other lithographic drawings both earlier and later;
but these wrere very few indeed, and this series of
twelve forms his special contribution to art in this
form. At various times, too, a good number of
his paintings were reproduced by lithography, and
in 1870, just before the war, a series of them by-
Emile Vernier, having a notable introduction by
Philippe Burty, was successfully launched; but
these were not the personal work of the master,
although in all probability proofs of them were
submitted to him before publication.

The series of twelve lithographs, of which eight
are now here reproduced, formed the 1872 port-
folio, the issue of which was limited to fifty sets.
These were drawn by Corot on the transfer or “auto-
graphic ” paper mentioned above, and mechani-
cally transferred to the stone, from which practi-
cally any number could have been printed. The
only reason for restricting the number to fifty was
to make the publication scarce and therefore to
be specially treasured by subscribers. The copy
I possess is numbered twenty-one, and this
figure is authenticated by Corot’s own signature
underneath.

Our old artist—Corot was then in his seventy-
sixth year—found a certain delight in working on
these drawings, and it is surprising that even at his
advanced age he did not pursue the matter further.
The only explanation is that he had been gently
persuaded to it by his enthusiastic pupil, Robaut,
and as soon as the strain of war time was overcome,
he experienced still more pleasure in returning to
the pursuit of what he called his ordinary work. It
is noticeable, however, that Corot did not immedi-
ately proceed with the same character of landscape
painting in oil as he had gradually been developing
—that which he called the feather tree composition.
Several of the pictures he painted immediately
after the war were strongly tinged with his earlier
and more precise and prosaic manner, and it was
some months before he gave his trees the delicate