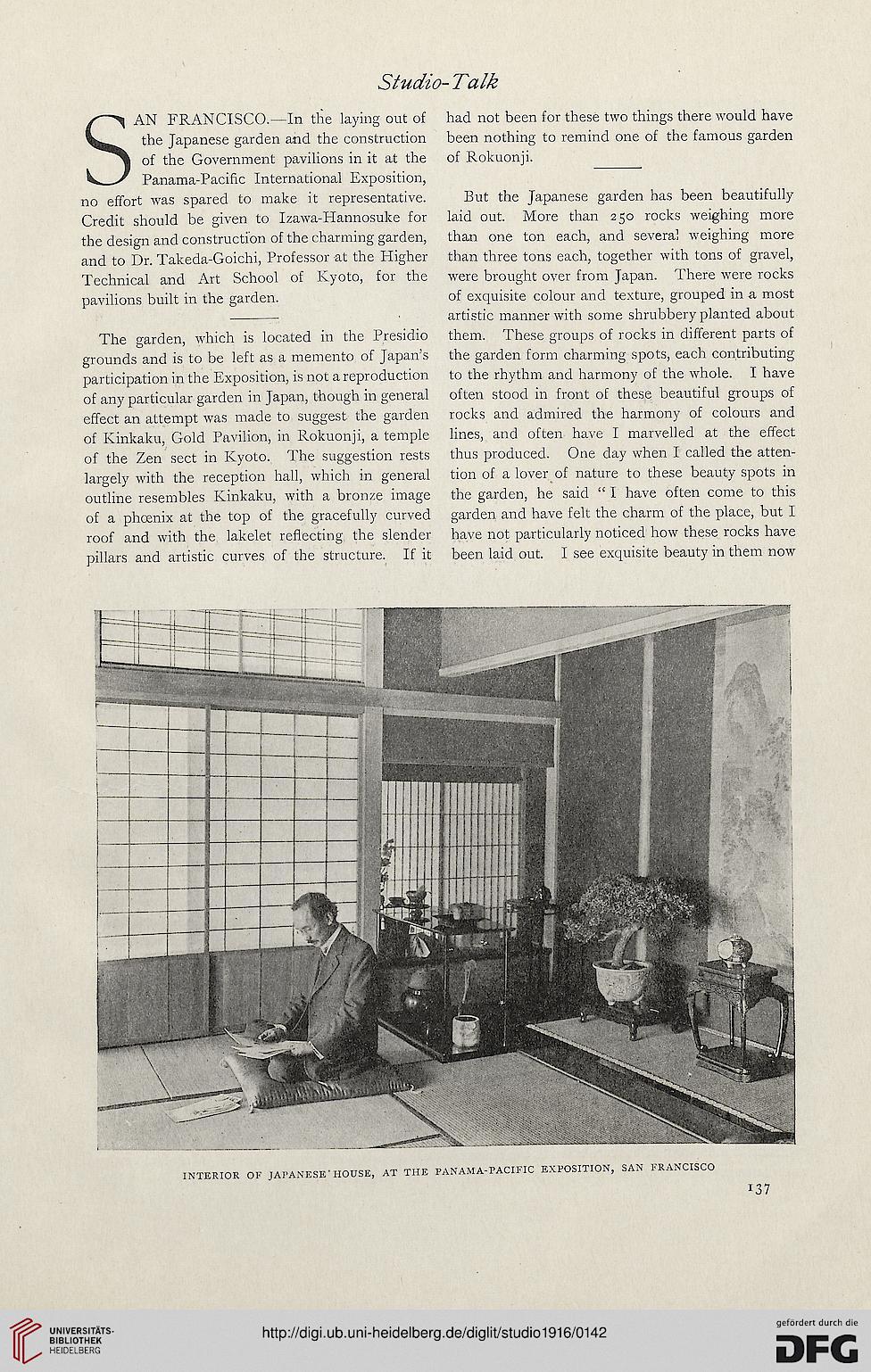 SAN FRANCISCO.—In the laying out of
the Japanese garden and the construction
of the Government pavilions in it at the
Panama-Pacific International Exposition,
no effort was spared to make it representative.
Credit should be given to Izawa-Hannosuke for
the design and construction of the charming garden,
and to Dr. Takeda-Goichi, Professor at the Higher
Technical and Art School of Kyoto, for the
pavilions built in the garden.

The garden, which is located in the Presidio
grounds and is to be left as a memento of Japan’s
participation in the Exposition, is not a reproduction
of any particular garden in Japan, though in general
effect an attempt was made to suggest the garden
of Kinkaku, Gold Pavilion, in Rokuonji, a temple
of the Zen sect in Kyoto. The suggestion rests
largely with the reception hall, which in general
outline resembles Kinkaku, with a bronze image
of a phoenix at the top of the gracefully curved
roof and with the lakelet reflecting the slender
pillars and artistic curves of the structure. If it

had not been for these two things there would have
been nothing to remind one of the famous garden
of Rokuonji.

But the Japanese garden has been beautifully
laid out. More than 250 rocks weighing more
than one ton each, and several weighing more
than three tons each, together with tons of gravel,
were brought over from Japan. There were rocks
of exquisite colour and texture, grouped in a most
artistic manner with some shrubbery planted about
them. These groups of rocks in different parts of
the garden form charming spots, each contributing
to the rhythm and harmony of the whole. I have
often stood in front of these beautiful groups of
rocks and admired the harmony of colours and
lines, and often have I marvelled at the effect
thus produced. One day when I called the atten-
tion of a lover of nature to these beauty spots in
the garden, he said “ I have often come to this
garden and have felt the charm of the place, but I
have not particularly noticed how these rocks have
been laid out. I see exquisite beauty in them now

INTERIOR OF JAPANESE' HOUSE, AT THE PANAMA-PACIFIC EXPOSITION, SAN FRANCISCO