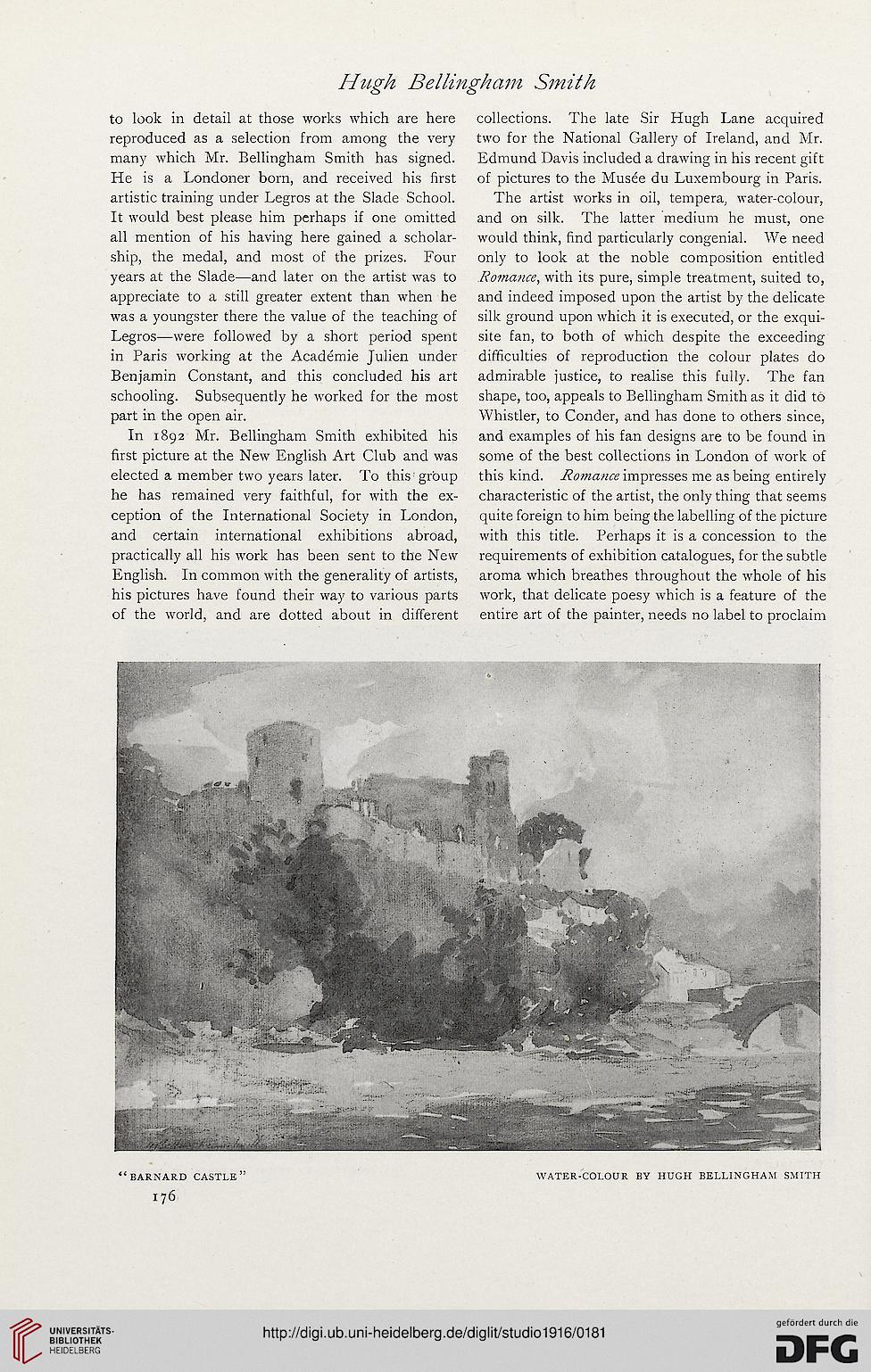 to look in detail at those works which are here
reproduced as a selection from among the very
many which Mr. Bellingham Smith has signed.
He is a Londoner born, and received his first
artistic training under Legros at the Slade School.
It would best please him perhaps if one omitted
all mention of his having here gained a scholar-
ship, the medal, and most of the prizes. Four
years at the Slade—and later on the artist was to
appreciate to a still greater extent than when he
was a youngster there the value of the teaching of
Legros—were followed by a short period spent
in Paris working at the Academie Julien under
Benjamin Constant, and this concluded his art
schooling. Subsequently he worked for the most
part in the open air.

In 1892 Mr. Bellingham Smith exhibited his
first picture at the New English Art Club and was
elected a member two years later. To this group
he has remained very faithful, for with the ex-
ception of the International Society in London,
and certain international exhibitions abroad,
practically all his work has been sent to the New
English. In common with the generality of artists,
his pictures have found their way to various parts
of the world, and are dotted about in different

collections. The late Sir Hugh Lane acquired
two for the National Gallery of Ireland, and Mr.
Edmund Davis included a drawing in his recent gift
of pictures to the Musee du Luxembourg in Paris.

The artist works in oil, tempera, water-colour,
and on silk. The latter medium he must, one
would think, find particularly congenial. We need
only to look at the noble composition entitled
Romance, with its pure, simple treatment, suited to,
and indeed imposed upon the artist by the delicate
silk ground upon which it is executed, or the exqui-
site fan, to both of which despite the exceeding
difficulties of reproduction the colour plates do
admirable justice, to realise this fully. The fan
shape, too, appeals to Bellingham Smith as it did to
Whistler, to Conder, and has done to others since,
and examples of his fan designs are to be found in
some of the best collections in London of work of
this kind. Romance impresses me as being entirely
characteristic of the artist, the only thing that seems
quite foreign to him being the labelling of the picture
with this title. Perhaps it is a concession to the
requirements of exhibition catalogues, for the subtle
aroma which breathes throughout the whole of his
work, that delicate poesy which is a feature of the
entire art of the painter, needs no label to proclaim