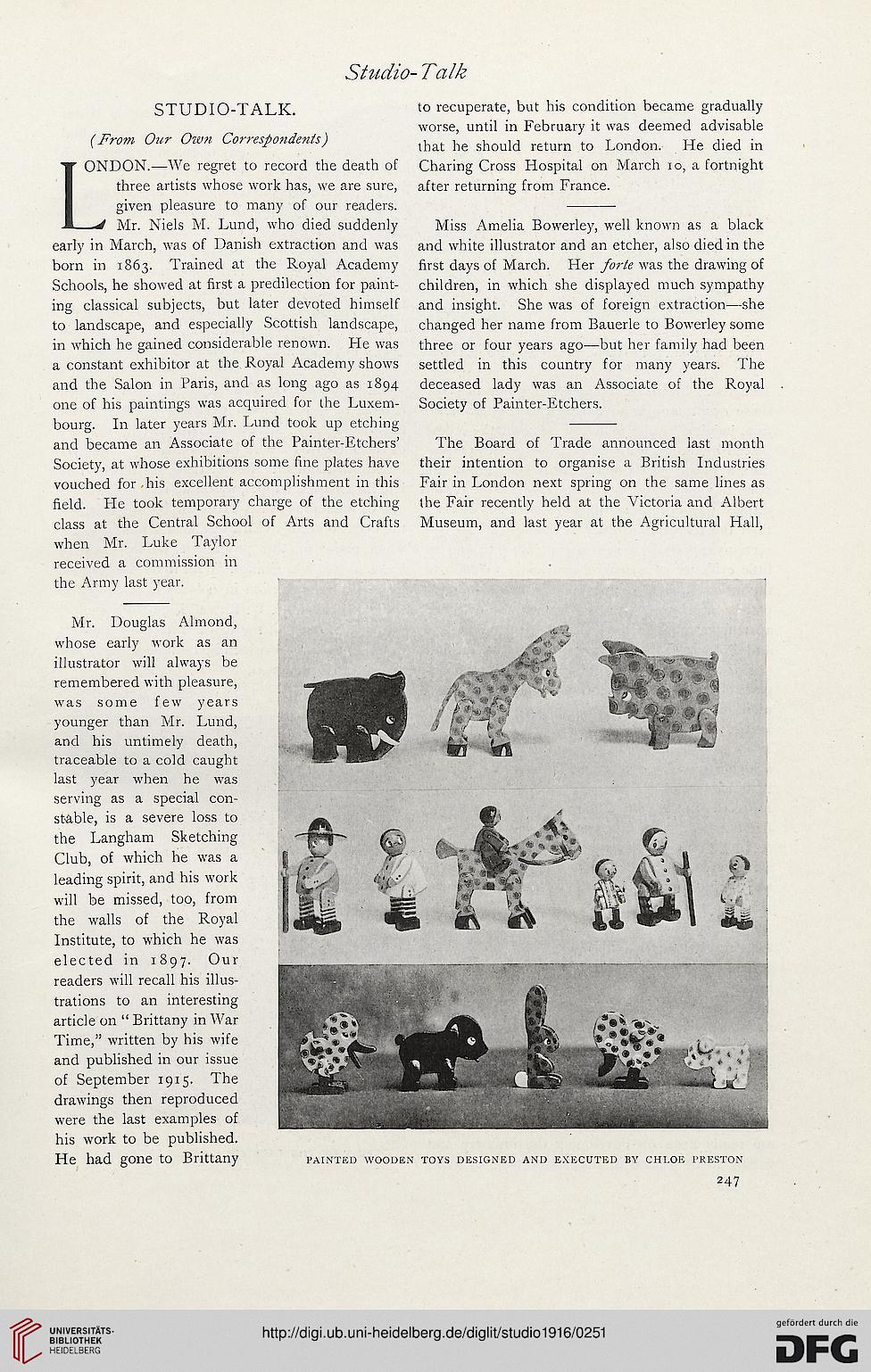 LONDON.—We regret to record the death of
three artists whose work has, we are sure,
given pleasure to many of our readers.
—J Mr. Niels M. Lund, who died suddenly
early in March, was of Danish extraction and was
born in 1863. Trained at the Royal Academy
Schools, he showed at first a predilection for paint-
ing classical subjects, but later devoted himself
to landscape, and especially Scottish landscape,
in which he gained considerable renown. He was
a constant exhibitor at the. Royal Academy shows
and the Salon in Paris, and as long ago as 1894
one of his paintings was acquired for the Luxem-
bourg. In later years Mr. Lund took up etching
and became an Associate of the Painter-Etchers’
Society, at whose exhibitions some fine plates have
vouched for his excellent accomplishment in this
field. He took temporary charge of the etching
class at the Central School of Arts and Crafts
when Mr. Luke Taylor
received a commission in
the Army last year.

Mr. Douglas Almond,
whose early work as an
illustrator will always be
remembered with pleasure,
was some few years
younger than Mr. Lund,
and his untimely death,
traceable to a cold caught
last year when he was
serving as a special con-
stable, is a severe loss to
the Langham Sketching
Club, of which he was a
leading spirit, and his work
will be missed, too, from
the walls of the Royal
Institute, to which he was
elected in 1897. Our
readers will recall his illus-
trations to an interesting
article on “ Brittany in War
Time,” written by his wife
and published in our issue
of September 1915. The
drawings then reproduced
were the last examples of
his work to be published.
He had gone to Brittany

to recuperate, but his condition became gradually
w'orse, until in February it was deemed advisable
that he should return to London. He died in
Charing Cross Hospital on March 10, a fortnight
after returning from France.

Miss Amelia Bowerley, well known as a black
and white illustrator and an etcher, also died in the
first days of March. Her forte was the drawing of
children, in which she displayed much sympathy
and insight. She was of foreign extraction—she
changed her name from Bauerle to Bowerley some
three or four years ago—but her family had been
settled in this country for many years. The
deceased lady was an Associate of the Royal
Society of Painter-Etchers.

The Board of Trade announced last month
their intention to organise a British Industries
Fair in London next spring on the same lines as
the Fair recently held at the Victoria and Albert
Museum, and last year at the Agricultural Hall,