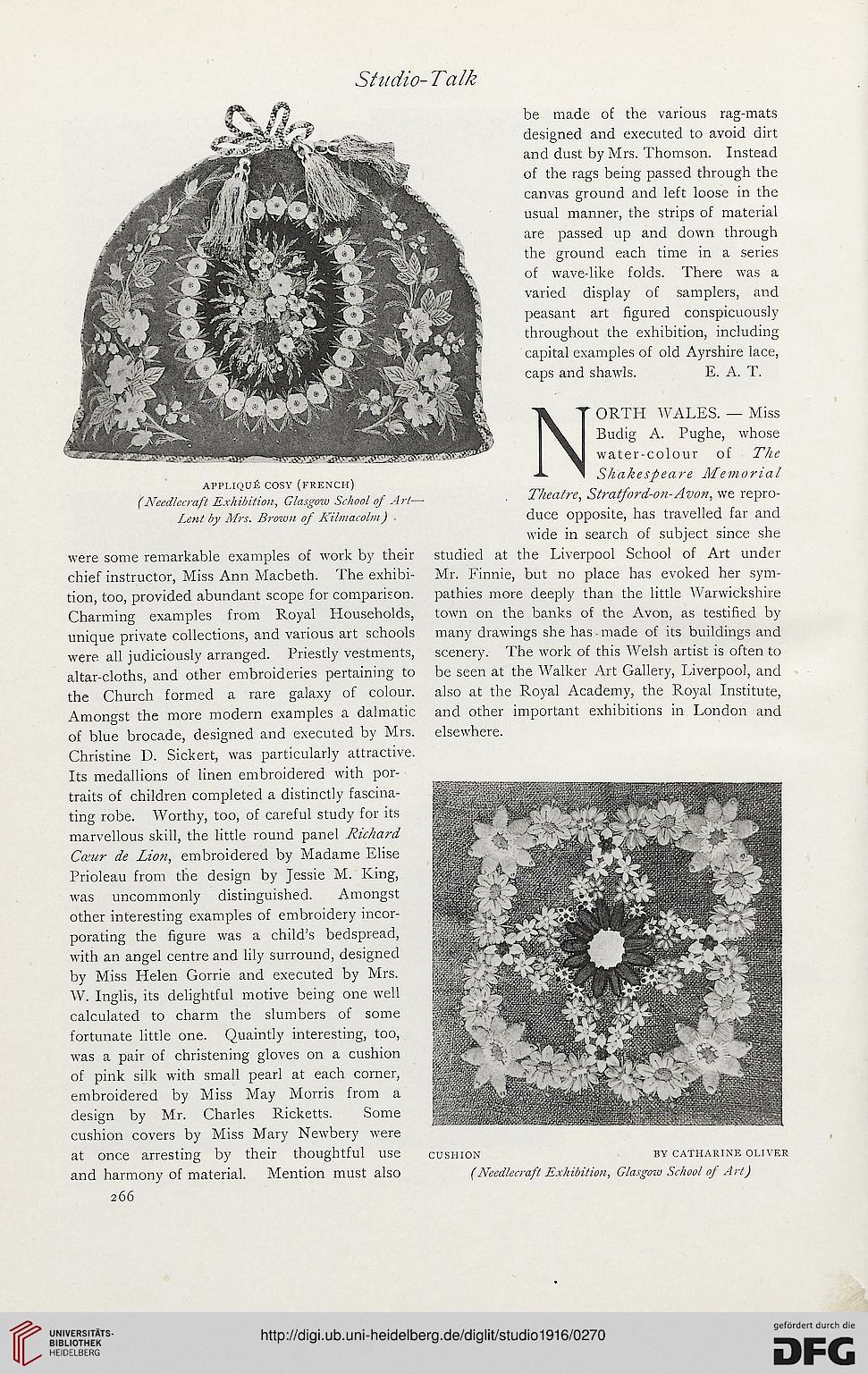 be made of the various rag-mats
designed and executed to avoid dirt
and dust by Mrs. Thomson. Instead
of the rags being passed through the
canvas ground and left loose in the
usual manner, the strips of material
are passed up and down through
the ground each time in a series
of wave-like folds. There was a
varied display of samplers, and
peasant art figured conspicuously
throughout the exhibition, including
capital examples of old Ayrshire lace,
caps and shawls. E. A. T.

were some remarkable examples of work by their
chief instructor, Miss Ann Macbeth. The exhibi-
tion, too, provided abundant scope for comparison.
Charming examples from Royal Households,
unique private collections, and various art schools
were all judiciously arranged. Priestly vestments,
altar-cloths, and other embroideries pertaining to
the Church formed a rare galaxy of colour.
Amongst the more modern examples a dalmatic
of blue brocade, designed and executed by Mrs.
Christine D. Sickert, was particularly attractive.
Its medallions of linen embroidered with por-
traits of children completed a distinctly fascina-
ting robe. Worthy, too, of careful study for its
marvellous skill, the little round panel Richard
Ca'ier de Lion, embroidered by Madame Elise
Prioleau from the design by Jessie M. King,
was uncommonly distinguished. Amongst
other interesting examples of embroidery incor-
porating the figure was a child’s bedspread,
with an angel centre and lily surround, designed
by Miss Helen Gorrie and executed by Mrs.

W. Inglis, its delightful motive being one well
calculated to charm the slumbers of some
fortunate little one. Quaintly interesting, too,
was a pair of christening gloves on a cushion
of pink silk with small pearl at each corner,
embroidered by Miss May Morris from a
design by Mr. Charles Ricketts. Some
cushion covers by Miss Mary Newbery were
at once arresting by their thoughtful use
and harmony of material. Mention must also
266

ORTH WALES. — Miss
Budig A. Pughe, whose
water-colour of The
Shakespeare Memorial
Theatre, Stratford-on-Avon, we repro-
duce opposite, has travelled far and
wide in search of subject since she
studied at the Liverpool School of Art under
Mr. Finnie, but no place has evoked her sym-
pathies more deeply than the little Warwickshire
town on the banks of the Avon, as testified by
many drawings she has - made of its buildings and
scenery. The work of this Welsh artist is often to
be seen at the Walker Art Gallery, Liverpool, and
also at the Royal Academy, the Royal Institute,
and other important exhibitions in London and
elsewhere.